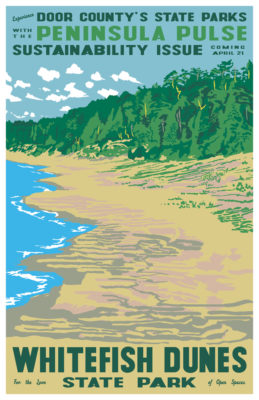 Founded: 1967
Acres:  867
Annual visitors: 150-200,000
Camping: Day-use park only, no camping
Trails: 14.5 miles for hiking
Beaches: 1.5 miles of sandy beach
Highlights: Old Baldy, a 93 foot sand dune with a view of Clark Lake to the West and Lake Michigan to the East; The expansive beach was named the best in the state by Wisconsin Trails Magazine. remains of eight successive prehistoric Native American Villages are on the National Register of Historic Places as Whitefish Dunes-Bay View Site (a village site has been re-created at the park to show what life used to be like at Whitefish Dunes); hiking and cross-country ski trails

It was the rare botanicals, unique beauty and the largest and most significant dunescape on Lake Michigan’s western shore that led noted landscape architect Jens Jensen to recommend Whitefish Dunes as a state park site in 1937.

While Jensen wasn’t alone in his feelings for this great treasure, there were many who saw the dunes as unworthy of protection, leading to three decades of halted progress on the dream – including two consecutive denials by the county board to acquire land for a park. Finally, voting-age citizens of Door County were given voice on the matter in the form of a referendum, which passed in April 1967 by a margin of 331 votes.

In the 50 years since, the community has embraced Whitefish Dunes State Park as a diverse retreat for tourists and locals seeking cool lake water on hot summer days, explorers interested in the shipwrecks of Lake Michigan, and history lovers who wish to experience early life on the peninsula by visiting its re-created Native American settlement.

1939: The State Planning Board and the State Conservation Commission (now known as the Wisconsin Department of Natural Resources) in cooperation with the United States Department of the Interior recommends the dunes area for consideration as a state botanical scientific area

1946: State Planning Board again recommends 1,200 acres of land from Whitefish Bay Creek to Cave Point be considered for a state park

1959: The National Park Service recommends the Whitefish Bay area as the best site along the Lake Michigan shore in Wisconsin for a park

March 1965: Door County Board defeats the acquisition proposal by a vote of 14-12

September 1966: The Sevastopol Town Board adopts a resolution opposing the creation of a state park due to loss of tax base

October 1966: State Conservation Commission approves a “limitations on development” resolution drafted in August 1966 at a Sevastopol Town Board meeting

November 1966: Door County Board defeats proposed dunes acquisition by a vote of 12-8. An advisory county referendum is then scheduled for April 1967.

May 1967: 83.2 acres of private property in the proposed park area are deeded to the Town of Sevastopol

June 20, 1967: Door County Board approves the establishment of Whitefish Bay park by a vote of 11-10

April 1968: The Sevastopol Town Board tables a motion to sell town property to the state

November 1977: The Natural Resources Board approves a donation of 80 acres of land to Whitefish Dunes State Park by The Nature Conservancy and modifies park boundaries to include the new land

1997: Whitefish Dunes State Park beach closed due to high water levels. The beach is reopened in 1999.

2014: Vegetation management variance added to Whitefish Dunes master plan in response to the widespread presence of beech bark disease at the park.

The Friends of Whitefish Dunes was organized for the charitable and educational purpose of supporting, assisting and promoting the Wisconsin Department of Natural Resources with interpretive, scientific, historical, educational and related visitor services at Whitefish Dunes State Park.