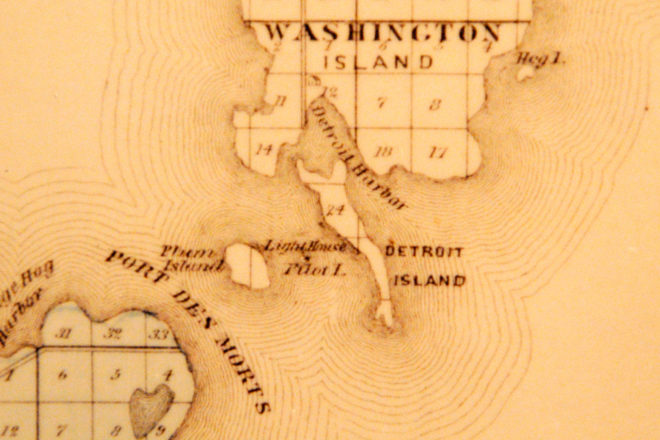 When Brennan Christianson took over as the site manager of Death’s Door Maritime Museum in Gills Rock last May, he quickly learned what visitors are most curious about.

“People would ask me where the name ‘Death’s Door’ comes from – a lot,” Christianson said.

He could answer with a version of a story most are happy to accept: a tale furthered by H.R. Holand and others who trace the name to a battle between the Potawatomi and Winnebago tribes during the 17th century. Christianson summed up that version as follows:

“A large force of cannibalistic, human-sacrificing warriors pushed out a peaceful group of Natives from the Door peninsula. The peaceful Natives decided to break with their former practices and conduct a sneak attack. Scouts were sent out to find a landing zone in advance by lighting a signal fire. All three were captured and burnt at the stake. The last one revealed the plans of the peaceful tribe, and knowing what they were doing, the warriors lit the fires at the wrong place. This led to a huge catastrophe where the peaceful Natives washed ashore and died.”

The legend continues with the warriors then launching a counter attack, sending warriors to attack the islands across the passage where Green Bay meets Lake Michigan, between the tip of the peninsula and the south shore of Plum Island. A huge storm arose and wiped them all out, leading the tribe to name the passage Death’s Door.

“The question is a lot more complicated than people give it credit for,” he said, so he started digging, and digging, and digging. He read old books, talked to professors with knowledge of the region, and researched old materials and references. Through his research, he found that Holand “didn’t really know what he was talking about” – a conclusion many have come to when digging deeper into some of Holand’s histories.

Christianson said the stories of Holand and other historians don’t have primary sources, refer to battles between Native populations that don’t make sense, assume military conflict and are written by people who didn’t know the Native languages and customs.

“It’s hard to imagine these sources are extremely credible,” he said.

On Jan. 6, Christianson presented his findings as part of the Door County Maritime Museum’s Maritime Speaker Series, and though he didn’t find a conclusive answer for the naming of Death’s Door, he is confident in the stories he can dispel.

“We are far from certainties,” he said. “We may never know what truly happened to inspire people to call the passage Death’s Door. But we can disprove incorrect interpretations.”

For one, he said, the accepted versions either rely on dubious accounts or simply don’t cite sources at all. The first written reference to Death’s Door came from the French missionary Emmanuel Crespel in 1728.

Crespel was accompanying a French military expedition from Montréal to the Fox Valley when canoes got caught in a gust of wind and broke on the shore. Nobody died, but in his recounting, Crespel referred to the passage as Cap de Mort – or Door of Death.

But Crespel did not bestow the name on the passage. He referred to it as a matter of fact, Christianson said, which means that the name already existed. The next written references Christianson found came nearly 100 years later, When Willard Keyes referred to the passage being “so-called for the many Indian canoes wrecked there.”

So where does the name actually come from?

Christianson’s best guess is that it dates to sometime between the 1650s and 1670s. During that period, the Potawatomi would form large trade fleets to travel to French trading posts to sell furs to buy firearms during times of peace when they wouldn’t be attacked by Iroquois warriors. Christianson said it’s possible that one of these trade fleets could have been caught in a storm that killed the trade party, which would have been a notable loss of life, leading to naming the passage Death’s Door.

But that’s far from conclusive, he cautions.

“The truth is we may never know, and that’s okay,” he said.

The next presentation in the Maritime Speaker Series will be Feb. 3, when Tamara Thomsen of the Wisconsin Historical Society will discuss Wisconsin shipwrecks.