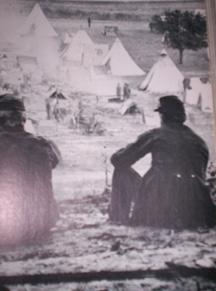 In observance of the 150th anniversary of the Civil War, the Gibraltar Historical Association has planned related events. The first “Gibraltar Talks: Civil War Reflections,” with presenter Joe Knaapen, will take place on May 9 at the Old Town Hall in Fish Creek at 7 pm. Knaapen will reflect on the life of Ed Minor who was a Civil War soldier from Fish Creek. After serving in the Civil War Minor became the mayor of Sturgeon Bay.

The Civil War had a profound effect on nearly all aspects of life in Wisconsin including in Door County. With the departure of men in uniform, farms faced labor shortages and women and children were left to carry on the daunting farming task alone.

Door County historian, Hjalmar Holand, wrote in one of his books, “Door County’s population in 1861 was less than 3,000. From this number it sent 167 recruits into the war. Most of these enlisted voluntarily.”

Gibraltar Talks programs are free and refreshments are served. Donations are always appreciated. For more information call 920.868.3618 or visit http://www.historicnoblehouse.org.