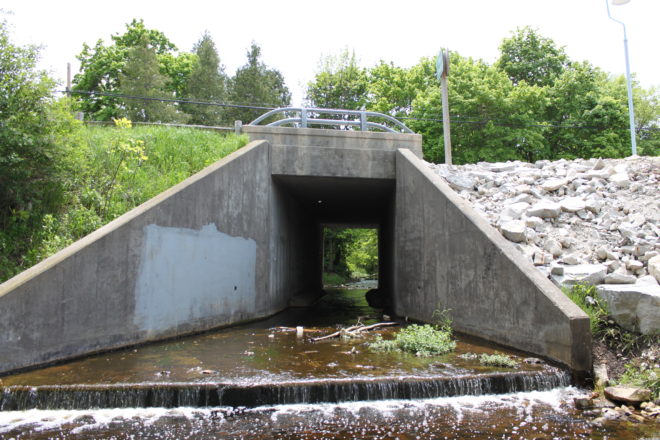 The Town of Gibraltar was not awarded the grant to replace the culvert for Fish Creek near Not Licked Yet, which would have improved passage for fish in Green Bay. Photo by Jackson Parr.

The Town of Gibraltar was not awarded a grant from the Great Lakes Restoration Initiative (GLRI) that would have paid for a replacement of the culvert on the highway over Fish Creek (the creek, not the community).

Matt Schaeve, environmental analysis and review specialist with the Department of Natural Resources (DNR), applied for the grant in Fish Creek in tandem with the ongoing Fish Creek watershed research and upcoming Hwy. 42 resurface project through the town.

“That cost-benefit of how much it’s going to be for the amount of habitat restored, it just didn’t score enough points,” said Schaeve.

The Environmental Protection Agency (EPA), which administers the GLRI funds, had $6.8 million in available grant money for habitat protection and restoration projects. The EPA received grant proposals totaling more than $22 million and the Fish Creek project could not compete with other applications for those funds.

Schaeve said the culvert replacement would only have opened up the stream an additional half-mile before another dam prohibited flow again.

A 2012 study of fish passages around Green Bay found Fish Creek and Ephraim Creek, which crosses Hwy. 42 near Brookside Lane, to be important for improving fish passage. Shaeve also included Ephraim Creek restoration in the grant, but since water levels are much higher today than in 2012, Ephraim Creek did not score highly and was not awarded grant funds.

“That kind of kept it out of the initial consultation,” said Schaeve. “Fish Creek seems like the most realistic one to have a chance.”

The replacement of the culvert would have shut down both lanes of traffic on Hwy. 42 for an estimated six weeks in spring 2019, forcing a redirection of traffic around the entire downtown.

Dick Skare, town board chair, is confident that continued research on Fish Creek’s watershed will allow the town to pursue additional grant dollars to complete the project in the future.