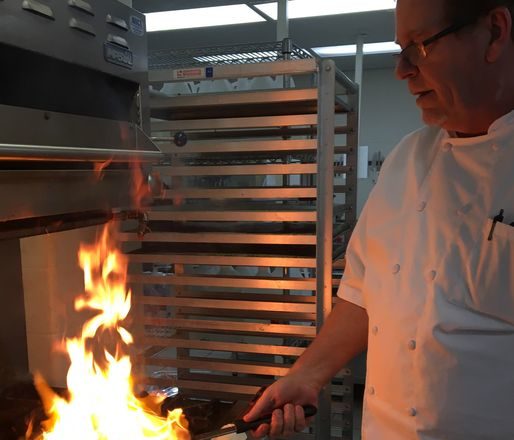 Good food – from the satisfaction of preparing it to the rewards of eating it – is meant to be a shared joy. So goes the creed of Door County chef Lawrence Hutchinson.

And in these days when COVID-19 has become the mother of invention – no matter how unwelcome – for many a business, Hutchinson, the head chef at Glacier Ledge Restaurant just north of Egg Harbor, found an opportunity to put his belief into practice. Curious foodies can get a backstage look at his kitchen and methods through a series of online and in-person cooking classes starting next week.

“We’ll take you step by step through the whole dish on your own laptop, keeping in mind that a commercial kitchen is entirely different than your own,” Hutchinson said. “We’ll develop our [course] menus with that in mind.”

The class Creative Holiday Sides will lead things off Dec. 14, 6 pm. The kitchen is large enough to maintain safe social distancing for only 10 in-person students. Others may join on Facebook Live, but the virtual attendance will be capped at about 30 to keep the class from getting unmanageable during the Q&A periods.

The live course costs $45; the online version is free.

“It’s an opportunity to reconnect, maybe have something to drink while you do it,” Hutchinson said. “It won’t be like you’re going to culinary school or anything, but [having] that enjoyment and connectiveness.”

Topics for upcoming sessions have not been chosen yet and could depend on the availability of fresh veggies and other produce. But he said the possibilities include seasonal favorites, vegetarian cooking, braising techniques, pastas or potato dishes.

Hutchinson invoked the seemingly long-ago days of large family gatherings in describing his plans for the Creative Holiday Sides class.

“When you would meet for Christmas, you would do a potluck and bring your own side, right?” he said. “We’re looking at doing something interesting with Brussels sprouts, Alpine-style potatoes, bacon leeks and fingerling potatoes. I try to do intricate stuff – not the same old tired stuff like a green-bean salad” – or even the perennial cranberry sauce that can instead be prepared in such a way as to go with different kinds of meat, such as chicken or duck.

Hutchinson said the upcoming series is his restaurant’s first cooking-instruction offering other than some special one-time events at the request of corporate guests or similar groups that were looking for fun team-building exercises.

“From a business standpoint, we have to start developing other outlets,” he said. “People are all cooped up now. There’s a mental impact from being quarantined from this COVID thing.”

Glacier Ledge, a casual fine-dining establishment, opened in the spring of 2017 within a complex that also includes Door Artisan Cheese Company and The Cave specialty food market. All three businesses, located in a prominent spot on Highway 42 between Egg Harbor and Fish Creek, are owned by master cheesemaker Mike Brennenstuhl.

The restaurant specializes in the tapas-style cuisine of Spanish origins – an approach that splits up multiple large entrées into small-plate servings to be shared within groups of diners. Think appetizer-sized portions, but made up mostly of bona fide entrée courses rather than teaser snacks.

The communal experience of dining runs throughout culinary history, Hutchinson said, noting that finding new foods has been a byproduct of early trade and exploration from Japan to the Americas.

“When you’re sharing, you’re talking [about it] instead of just eating,” he continued. “We don’t rush people through that. Yes, we have to make a profit, but it’s not our first motivation. When you go out to eat, you should learn and have a good time, not a chore.”

Hutchinson also strives to keep his healthful dishes high on fresh produce and low on salt, butter and cream, except for when those last two ingredients might make for a better baking technique or a richer dessert. Processed ingredients or, heaven forbid, finished creations are verboten.

And Hutchinson is not beholden to Wisconsin’s sacred (dairy) cow of cheese, despite sharing space with a cheese factory and working for a cheese artist.

“You know, they’d like it to be a [cheese-based menu],” he said, chuckling. “But cheese on everything? That’s not cool. I like cheese – don’t get me wrong. We do showcase it in our specials and do our own flatbreads [pizzas], where we use our own cheese.”

Hutchinson’s résumé includes cooking in Ritz-Carlton kitchens, owning his own restaurant in the Los Angeles area and catering to Hollywood movie sets that might require a fingernail-biting trip into the remote mountains or trying to satisfy the particular tastes of big stars.

The hospitality industry’s outside-the-box adjustments to the pandemic are probably here to stay, Hutchinson said.

“[New ideas] will keep evolving; that’s just the way it is,” he said. “It’s going to take years for [restaurant owners and customers] to get over this, like wars or any dramatic events in society. People discover better ways to do things.”

In addition to the new cooking classes, Glacier Ledge has also responded to this year’s crisis by introducing curbside pickup and heat-and-eat meals that can be popped into the oven. The choices include short ribs, macaroni and cheese, salmon, lasagna and turkey pot pie.

Future innovations at Glacier Ledge might include boxed-food delivery or selling packaged ingredients to use for the instructional sessions, Hutchinson said.

“After the [financial] crash of ’08, fine dining was almost gone,” he said. “There were just a handful of [establishments] left because people just didn’t eat that way anymore. So when [the pandemic] happened, you think this is going to kill us. But as time went on, I thought what this will do is cull the herd, so to speak. We had a positive attitude from the beginning – not ‘We’ll lose our jobs,’ but that this is fun to do.”

COVID-19 has forever changed the landscape, Hutchinson said, forcing everyone to get a lot more creative.

“The trick is to just take baby steps,” he said. “If [a competitor] does X, go a little beyond X instead of trying to take a rocket ship to the moon. And be flexible. If something doesn’t work, back off and take another look or abandon it.”To learn more about Creative Holiday Sides or the other upcoming cooking classes, call Glacier Ledge Restaurant at 920.868.1333 or visit doorartisancheese.com.