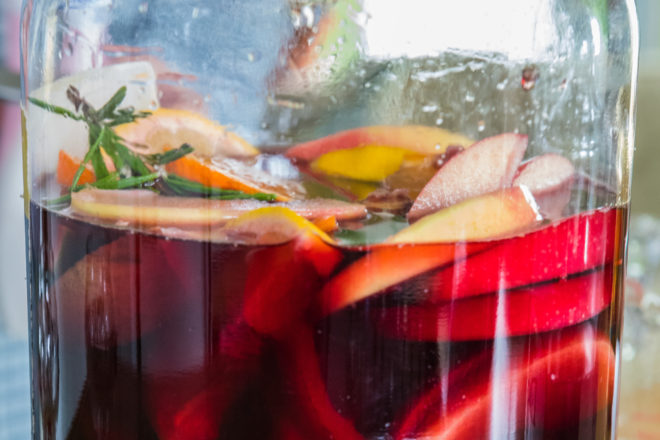 Jim Lundstrom adds a Door County touch to a pleasant Euro-punch with two versions of his Cherry, Cherry Sangria. Photo by Len Villano.

My goal was to create a Sangria with as many local products as possible, a Door County Sangria, if you will.

How about cherry Sangria? Never heard of it, but why not?

The idea came to me after I had already come up with several other more traditional Sangria recipes. I was in Main Street Market in Egg Harbor, walking past an aisle of local wines that I must have passed a hundred times without noticing what I noticed on this particular day. It was a bottle of Kirsche from the von Stiehl Winery of Algoma. Kirsche is a cherry wine fortified with brandy.

Then I thought, what other exotic cherry-based liquors or liqueurs are produced in our area that I could dump into a Sangria?

Right there on the shelf I saw that Door County Distillery makes a cherry-flavored brandy and an interesting liqueur called Cherry Bluff Infusion (a 90 proof grain neutral spirit infused with cherries and herbs). Many of the county wineries do cherry wines. I chose Lautenbach’s Orchard Country Dry Cherry Wine.

To these I added the traditional lemon and lime, as well as a blood orange, two varieties of apples, a red pear, two big sprigs of rosemary, a few spoons of superfine sugar (because it dissolves faster than table sugar), all infused into the wine and liquors, and topped off with sparkling water.

The cherry wine version was light, tart, refreshing and probably dangerous, because there seemed to be no hint of alcohol. It tastes as though you could drink it all day, which I believe is the mark of a highly successful drink.

I chose to let the Montmorency cherries shine, so the result was tart. I used only three tablespoons of superfine sugar. You could take that up to as many as six tablespoons, depending on your tastes, but I would taste after each sugar addition.

You could also reduce the tartness by the type of soda you add. I used a lightly lemon-flavored sparkling water, but you could add lemon-lime soda, ginger ale or even ginger beer.

While I liked this version and the idea of the potential variations using different sodas, I really missed the deep red wine base of traditional Sangria.

Some believe Sangria was developed in Spain as a way to mask an inferior wine. Load it with fruits and spices, and who will know?

I prefer to think that Sangria was not about masking inferior wine, but about making a party out of an inadequate supply of wine. I’ve got eight people at my house and a single bottle of wine. But I’ve also got a half-bottle of brandy, orange liqueur, lemons, limes, herbs and spices. Throw them all in and let’s have a party!

A form of Sangria was a popular party drink in 18th and 19th century England, but it was known as Claret Cup. Claret is what the English called Bordeaux. Claret Cup appears in Jane Austen’s Pride and Prejudice, and Charles Dickens had his own recipe — one of several drink recipes he left behind:

“Put into a large jug, 4 or 6 lumps of sugar; give the preference to 6. The thin rind of a lemon, leave it to stand for ten minutes and stir. Add a wine glass of brandy, then a bottle of claret, then a half bottle of soda water. Then stir well and grate in nutmeg. Then add the ice. If borage be used for this cup, half a handful will be found quite sufficient. Stir well, before serving.”

All of these things were on my mind while once again walking though Main Street Market and noticing for the first time — even though I have probably walked past it a thousand times — an entire shelf of Spanish wines. I snagged a bottle of Rioja for my next Sangria experiment. It made a very different drink with less tartness and more wine feel. Purple power! 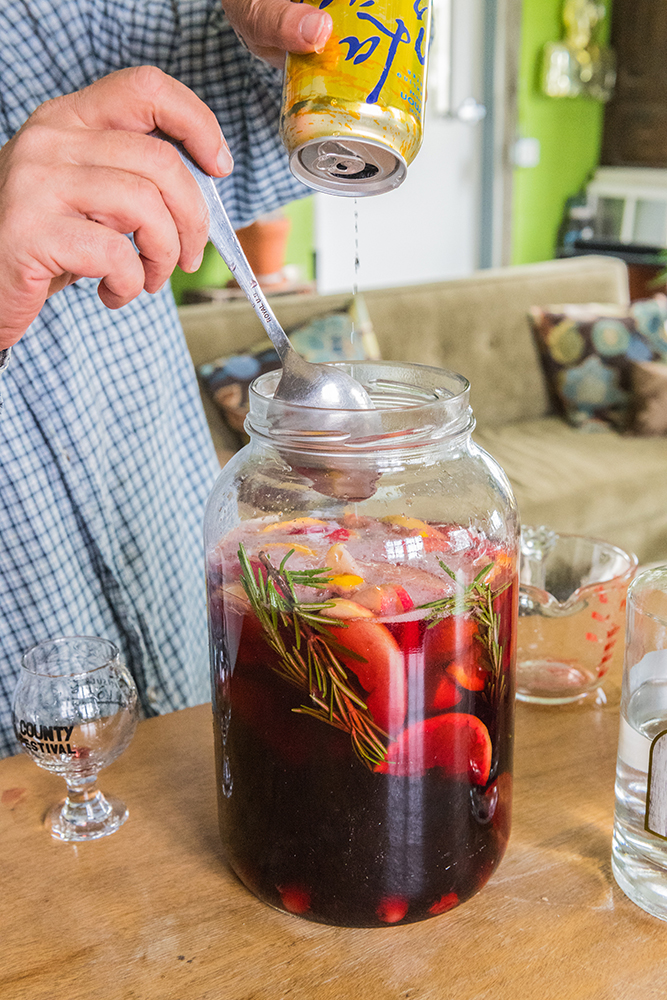 Cherry, Cherry (She Got the Way to Move Me) Sangria

3 Tbsp superfine sugar (or up to 6; taste as you add if you don’t like the tartness of 3)

Big scoop of Montmorency cherries (it wasn’t the season for fresh cherries, so I used Wood Orchard’s unsweetened cherries from a jar, but use fresh if you can because it will look so beautiful with ripe cherries)

Cherry, Cherry (She Got the Way to Groove Me) Sangria

1 bottle Spanish Rioja wine (if you want to maintain the local theme, find a deep, dark red with fruity notes; I ran out of time)

Big scoop of Montmorency cherries (see note in above recipe)