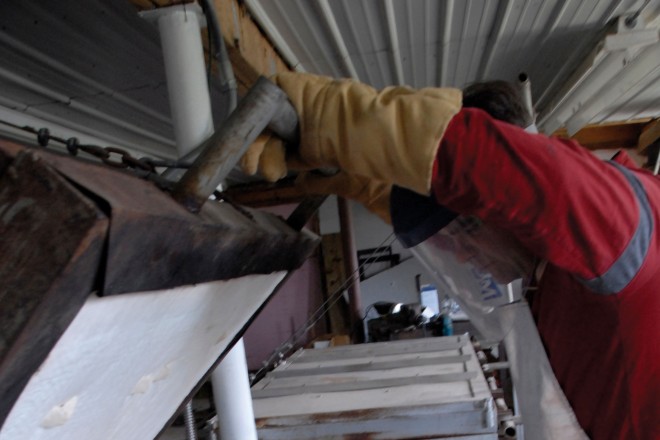 It’s easy to imagine British author Terry Pratchett touring Door County on a summer afternoon, ambling along the lakeside of the peninsula, walking into one of Door County’s newest galleries and – appropriately and appreciatively awed – writing these words. Of course, unless Pratchett was some sort of time traveler, it is impossible for K. Allen Gallery, the latest venture of Keith and Deanna Clayton (artists, owners and operators) to have inspired the author. After all, Pratchett penned this phrase over two decades ago and K. Allen Gallery is, well, a more modest two months old. But one can imagine it nonetheless. Devoted primarily to the artistry of contemporary glass, wood and jewelry, this unassuming gallery literally “glitters more than diamonds.”

K. Allen Gallery seems to be in the middle of nowhere, and its location is certainly part of its allure. Sitting on the corner of State Highway 57 and County Road Q in the thriving, beautifully rural and remarkably commercial/cultural “district” north of Baileys Harbor and south of Sister Bay proper, it’s a real surprise.

The first thing a gallery-goer notices is the newness. The polished concrete floors and crisp white walls are pristine. Against this backdrop, the works of over 30 artists are displayed with ample space and a flood of natural light. From large, outdoor sculptural pieces to smaller, table-top vessels, the gallery hosts an array of functional and non-functional works from all over the country. The atmosphere is clean and inviting. Except for the open fields of lavender and prairie grasses and the aesthetically charming historic farm buildings visible through every window, you might mistakenly think you’ve left Door County and stumbled into SoHo. It’s a dichotomy that works.

The K. Allen Gallery itself may be new, but the Claytons are not strangers to Door County or to the world of fine art. Both Keith and Deanna are nationally and internationally-recognized glass artists who have intentionally chosen this quiet corner of the Midwest to conduct business. Originally from Bucks County, Pennsylvania, which has similar rural character and is part of the reason why the Claytons feel so at home in Door County, Keith and Deanna Clayton moved here several years ago from southern Illinois where they both studied and ran an independent glass studio (Keith has an MFA in sculpture from Kent State University and Deanna has a BA in Art History from the University of Illinois, Champagne-Urbana).

Nowadays, they find their Sister Bay farm – with its 20 acres, recently renovated barn, granary, and farmhouse – to be the perfect place to work and play. They live on-site with their three young children, ages eight, six and three years old. The barn, which once held pigs and cows, now houses a variety of kilns (most hand-built by Keith), welders, grinders and an upper gallery used for private viewings. The newer K. Allen building, facing County Road Q, serves as gallery space and provides a clean and crisp backdrop for not only Keith and Deanna’s contemporary, vivid pieces, but also for jewelers, woodworkers and sculptors. This corner compound hums with activity and productivity.

K. Allen has an aggressive show schedule for the 2008 season:  eight shows over a period of six months,  incorporating the works of over 30 domestic and international artists. From “Masters in Glass” to “Works in Wood” to a jewelry exhibition, this is an impressive schedule for any gallery, but especially for a new business finding its feet.

“We wanted to showcase the works of emerging artists, artists who are well-known within the world of art, but are not household names,” says Keith. “After being in the business for 15 plus years, we’ve become very familiar with who’s doing what type of work. We realized that there’s an impressive amount of quality [work] out there, and we wanted to be part of bringing it to the public.”

“The season is ambitious. It’s a real commitment to keeping the gallery fresh, so that there’s a reason for people to come back again and again,” says Deanna, as she tours the gallery introducing the works and the artists, easily conversing about technique and style and telling stories about the artists themselves. One of the five jewelry exhibitors, jeweler Molly Bitters, was a former assistant to the Claytons. The “Masters in Glass” show includes artists from all over the country as well as works from Sweden and the Czech Republic. It’s obvious that the Claytons have personal ties and professional admiration for the artists they represent.

Though the emphasis is on bringing new artists’ work into the gallery, Keith and Deanna’s own work is still available, with a solo exhibition slated to run through mid-July. This is good news, for the Claytons have quite a following. They made their mark in the art world early on by mastering the ancient method of Pate-de-Verre (literally:  paste of glass). This technique is unusual and many collectors come to the gallery specifically for this. It involves first pouring and carving a wax mold, creating the pattern in reverse so that the finished piece is a relief of the original mold. The mold is then filled with both clear and colored glass, water, and a special binder. Next the piece is fired in an electric kiln to a precise temperature just below the melting point, ensuring that the granules fuse. This is the point where most artists consider their work finished. But the Claytons, through a technique developed by Keith and refined by Deanna, take the work one step further. Through a series of trials and errors, the Claytons developed a method of electroplating copper to the edge of the piece and soldering it to another glass piece, an industrial technique that marries the fragility of glass with the strength of metal. The result is a stunningly luminescent sphere made of two pieces that have become one, bonded together with a lace-like melding of copper. This unique marriage of method and materials has become Deanna’s signature style.

Keith, too, uses the Pate-de-Verre method in his work, and his recent ventures have incorporated the use of metals in addition to the copper electroplating of the glass vessels. With a strong emphasis on spinning globes (inspired by Tibetan prayer wheels), Keith’s art, though contemporary in nature, evokes a sense of history and antiquity, an unusual pairing of masculine and feminine. His work includes free-standing indoor/outdoor sculptures as well as wall-hung pieces. Both the Claytons produce work of impressive scale, with some glass vessels as large as 24 inches in diameter, and some pieces weighing more than 100 pounds. The new gallery space is outfitted with a garage door and concrete floors to easily facilitate the moving of grand pieces.

Keith and Deanna’s collaboration of talent and hard work has earned them not only a living, but recognition as two of the finest artists in the contemporary glass movement today. The Claytons were personally invited by the Clinton Administration to produce an ornament for the White House Christmas tree. For three years, the LPGA commissioned Deanna to create a glass piece to be awarded to golf champion Juli Inkster and two-time champion Annika Sorenstam. Early spring of this year, in the midst of getting the gallery up and running, Keith flew to New York to install a piece commissioned by the owners of the World Trade Center, and is working on a second piece for the same buyers which will be installed next to a Chihuly (“It’s in good company,” Keith laughs). This season, as well as a continual representation at K. Allen Gallery, the Claytons work can be seen at the SOFA (Sculpture, Objects and Functional Art) show in Chicago, the world’s foremost exposition of masterworks.

As full-time artists, parents, and now new gallery owners, the Claytons credit much of their success to their collaboration, and it looks to be a busy season for the K. Allen Gallery. “Three kids, 16 years of working and creating together, and now this beautiful new space,” says Keith. “Yeah. We’re going strong.”