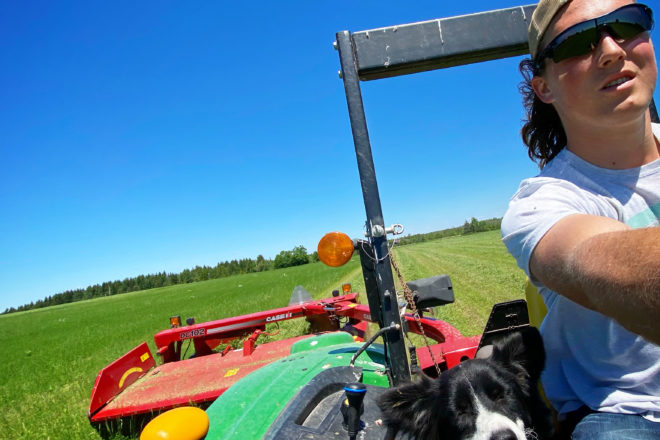 Like so many dairy farms in Door County, Gray-Aire Farms has a history stretching back for generations – and a corresponding history of necessary diversification to change with the times.

For brothers John and Paul Gray, that means growing industrial hemp and selling all the products from their farm, including ground beef, maple syrup, eggs, sweet corn and even campfire wood. They also invite the world in to experience life on the farm through their Airbnb, which sleeps six – a suggestion that Paul’s son Peter made. Guests have come from all over the U.S., as well as Australia, China and Poland.

“They love gathering their own eggs and sitting around the fire pit at night,” Peter said.

The new enterprises co-exist with the farm’s roots. John and Paul still farm pretty much as their dad, Harold, did, milking 43 Holstein cows twice a day. A dairy farmer all his life, Harold died at age 88 in 2013.

“We thought about getting bigger but decided we were comfortable staying the same size,” Paul said.

Staying the same size, though, has not meant staying the same. Where many small, family-owned dairy farms once dotted northern Door County, Gray-Aire – at 8420 Cty F, just outside Baileys Harbor – is now the northernmost in the county. It has survived while others have not by making do, in many cases, with what it has.

“Our dad made money when he got $23 for a hundred pounds of milk,” Paul said. “He bought equipment when milk prices were good, and we’ve kept it running. We put the money we make back into the farm.”

The truck from the Dairy Farmers of America Co-op picks up two and a half tons of milk every other day, but the price of and demand for that milk fluctuate in a manner that’s difficult to predict.

“The prices were pretty good for a while,” Paul said. “Then they went down. The price may go up in the stores, but farmers never seem to get their fair share.”

So the Grays have innovated by transitioning to other sources of income. People who know when to watch for the wheelbarrow near the entrance to the barnyard can score some mighty fine sweet corn. They also sell eggs from 60 hens, and the flock will increase by half next year. Their sugar maple trees produce 20 to 30 gallons of syrup each year. They have a waiting list for their ground beef – butchered and packaged by Marchant – which sells for $3.50 per pound. The dying black oak trees are turned into firewood that’s sold to Beantown Campground, just down the road, or custom sawn into lumber.

The project that seems to have the most potential for adding to Gray-Aire’s productivity is growing industrial hemp – an idea that Peter and his longtime friend Cody Pawlak introduced. With degrees in athletic training, business administration and sports management, Peter is in his fourth year as an athletic trainer at Henry Clay High School in Lexington, Kentucky. Eventually, though, he wants to have his own practice, ideally in Door County.

The idea for growing hemp came from Peter’s time in Kentucky, where many tobacco farmers – disillusioned with decreasing government subsidies – have switched to growing industrial hemp, which is raised and harvested in much the same way as tobacco.

Hemp has a long history in the United States. In 1619, it was such an important resource for making rope and sails that it was illegal not to grow it in Jamestown, Virginia. The hemp industry in Wisconsin began in 1908, and by 1917, 7,000 acres were being planted. World War II brought the Hemp for Victory campaign, with domestic hemp fiber again in demand, but the war on drugs of the later 20th century failed to explain the difference between industrial hemp and marijuana, so farmers were reluctant to grow hemp.

In 2017, raising hemp was again legalized in Wisconsin. Peter applied for the required license, and his first crop of 1,700 big, bushy plants high in CBD oil did well in 2019. The oil comes only from the blossoms and leaves of plants cloned from a mother plant. This year, 6,700 plants went into the ground on three and a half acres.

Harvesting is anticipated in early September. A state technician certifies when the plants are ready, and harvesting must take place within two weeks, when the THC level is no higher than 0.3 percent, making it impossible to feel any psychoactive effect or “high.” As with tobacco, hemp leaves are stripped from the plants by hand, then hung upside down to dry until the moisture level is reduced to 10 percent. The CBD oil will be bottled as Aire-Bud.

The days of dairy cows feeding along the roadside just outside Baileys Harbor on County F will likely come to an end soon, Peter said. None of the next generation will be milking cows, but they aren’t giving up on the farm, just re-thinking what it can be.

“Gray-Aire will still be around,” Peter said. “A testament to the continuing value of a family farm.”