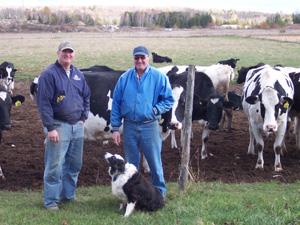 Paul and John Gray are part of a dairy farming tradition in Baileys Harbor.

In 1987 Door County was home to 14,000 milk cows, according to Door County Agriculture Agent Dean Volenberg. By 2002, the population had declined to 9,300. Of that dwindling number of dairy cattle, today 42 are to be found at the Gray-Aire Dairy Farm located near Baileys Harbor.

Once milk farms dotted the top of the Door County peninsula, but now the brothers John and Paul Gray’s operation is the northernmost in the county. This last outpost of milking cows in the land of tourists endures, even though good farming doesn’t always make good neighbors.

“We have a cop watching us when we spread manure,” Paul Gray said, “to see that we don’t spill any on the road.” April is the time of year when accumulated winter cattle waste is put on their fields as a natural fertilizer. “Neighbors get a good whiff of it before we get it worked in,” he continued. “It only takes a week or so. But we’re making a living.”

“One guy said that Door County was not meant to be farmed,” John Gray laughed. “He didn’t like a neighbor spreading manure next to his place. Toxic waste!”

The Grays have been farming in Door County for a long time. Harold Gray, the 83-year-old patriarch of the family, said that his grandfather Frank Gray emigrated to this country when he was a teenager. Initially settled in Chicago, he learned of Door County because of the firewood shipped to the city, moved to Baileys Harbor, married and made it his home.

Frank Gray’s son John, with the help of sons Edward and Harold, operated a farm not far from the present day Greenwood Restaurant.

As a student Harold Gray tested milk, won judging contests, and earned the praise of his agriculture teacher at Gibraltar High School. Young Harold saved $1,800 from working in the shipyards while he was still a student, his contribution toward buying a farm adjacent to his father John’s land. “My dad gave me a team of horses, five cows, and 50 chickens,” he recalled. Harold graduated from high school in 1943, began farming in 1945, and married his wife Ruth in 1947.

The two farming operations shared equipment and labor, short-cutting across a swamp from one farm to the other.

Harold Gray purchased the present farm in 1960 because of its better cropland. The brothers John and Paul, after graduating from Gibraltar High School, took over the operation in 1980 when Harold retired. Paul completed coursework in dairy herd management at Lakeshore Technical College.

Their herd now has a commendable average yearly production of 24,000 pounds of milk per cow.

The Grays have built their herd by buying registered Holstein stock and through selective breeding. Paul learned artificial insemination at Lakeside Tech and orders bull semen from suppliers in the U.S. and Canada.

A number of factors are frequently attributed to the demise of the small family farm. One is the soaring price of land; some farmers find more profit in selling rather than working their land. Another is the increasing size of farming operations, the cost effectiveness of mega-farms.

Paul Gray predicts that in the future only farmers who milk 100 head or more of dairy cattle will be able to survive financially. But he also has concerns for large farms in the immediate future because of the current economic climate. The problems on Wall Street not only affect Main Street, but farm roads as well.

Historically, small farms have depended upon diversification for their economic viability. Gary-Aire follows that tradition. On the 300-acre farm, about 200 are in production, with alfalfa, corn, and oats. Some of the land is planted with canning peas to bring in additional income. The brothers also sell hay. Along with maintaining their dairy herd, the brothers operate a custom band sawmill.

“Anybody that is restoring an old house and needs lumber to make patches, we’ll saw it, for example full-sized two-by-fours,” John said.

“We sawed hemlock to match trim for a guy’s house,” Paul said. “Sometimes people bring in a cherry log, or wormy butternut. Some guys have us make mantels.” One man had them mill lumber that he transported to Canada to make a cabin.

In the spring the brothers tap their maple trees and make syrup that they sell from the farm. They sell sweet corn, too, leaving a wheelbarrow of ears and a money jar by the road, and find people to be honest.

“People will leave notes,” Paul said. “‘No money, but I’ll leave some tomorrow.’ And they do.”

The farm also sells eggs from a flock of 30 chickens, a new breed called Browns, hens that never molt and lay brown eggs year round.

“We charge people $25 to hunt on our property,” Paul said. “You get some nice guys and you know who’s on your farm. It brings in a little income.”

The variety of their work appeals to both brothers. “We are our own boss,” Paul said. “Something different every day. We like making firewood, sawing logs one day, fixing water pipes the next. Something always different.” John echoes the sentiment.

“Milking is a grind,” Paul said, “twice a day, every day, but I don’t mind milking cows.” 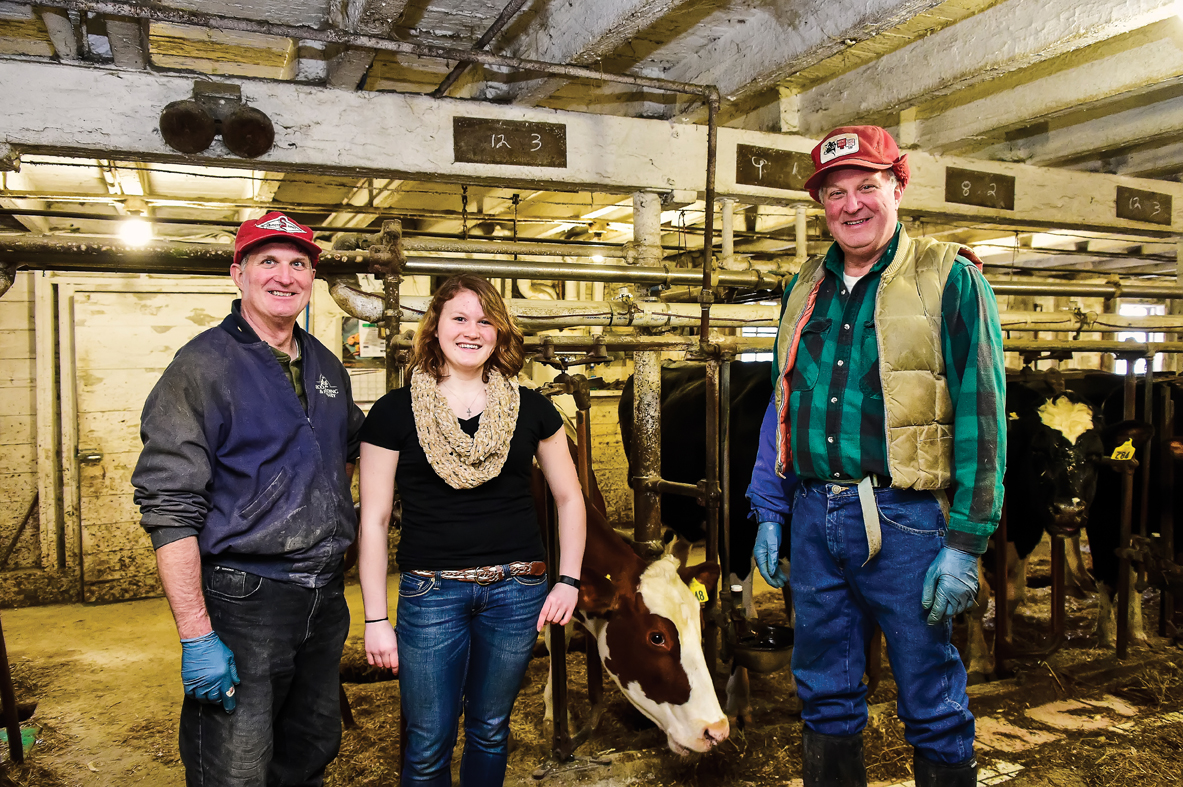 Paul, Madalyn, and John Gray at the family farm in Baileys Harbor. Photo by Len Villano.

“It’s warm in the barn, the radio is going,” Paul said, “and when the work is done, we can take the rest of the day off if we want.”

They’ve had offers to purchase their land. “A guy stopped by and left his card,” John said. “He would buy the farm. But once you sell the land, you could never afford to buy it back.” He and his wife Lori, and Paul and his wife Mary Kaye, have no plans to sell.

But when they look to the future Paul said, “My kids don’t want to farm.” He has four children, Samantha, Matt, Peter, and Maddy. “But they might turn the farm into something else some day.”

Some small farms in the state have found their niche through organic farming. The brothers have considered that option, but are concerned with weed control, as undesirable vegetation spreads from adjacent vacant land.

For now John and Paul Gray are content with their Gray-Aire Dairy Farm. They have their father’s wisdom – “You can’t make money with old chickens or young cows,” Harold Gray says – and the generational heritage of farmers in their family. And they have the resourcefulness to diversify, continuing a tradition of small farms that extends from our nation’s earliest history to the present.

Gary Jones is a writer and teacher who lives in Northern Door.