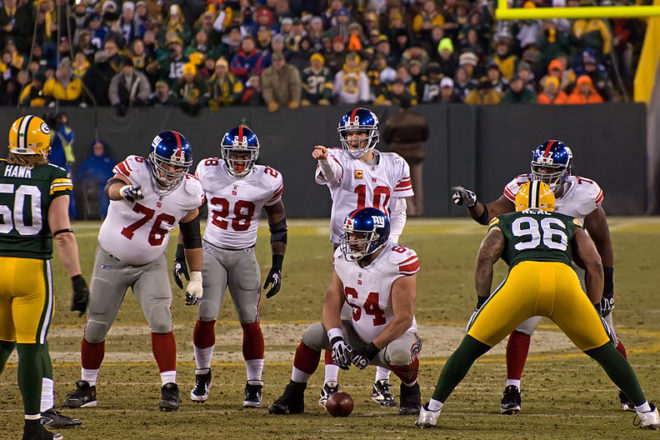 In the final game of the NFL’s 2016 season, the Green Bay Packers (10-6) defeated the Detroit Lions (9-7), 31-24, on last weekend’s Sunday Night Football. The victory gave the Packers the NFC North Division championship for the fifth time in the past six seasons and a first-round home game. They will host the New York Giants (11-5) in the Wild Card round on Sunday afternoon at Lambeau Field.

Green Bay’s recent division championship was the team’s 14th (including the strike-shortened 1982 season) since the AFL-NFL merger in 1970. From 1970-2001, the division was known as the NFC Central and included the current teams in the NFC North with the addition of the Tampa Bay Buccaneers.

Following the NFL’s realignment in 2002, the Buccaneers were moved to the newly formed NFC South while the NFC Central became known as the NFC North. Impressively, the Packers have won nine of the 15 division titles since the NFC North began play in 2002.

While a division championship is noteworthy, all eyes are now focused on Sunday’s matchup with the New York Giants. This will be the second meeting at Lambeau Field between the Packers and Giants this season. In Week 5, the Packers were victorious over the Giants in a primetime contest, 23-16, on Sunday Night Football.

The Packers and Giants rivalry has an interesting history, with the teams competing since 1928. In the 60 matchups over the Giant’s 91-year history, Green Bay holds an overall advantage with a head-to-head record of 32-26-2.

This will be the eighth postseason meeting between the Giants and Packers. Of their seven postseason matchups, five were played for an NFL Championship (’38, ’39, ’44, ’61, ’62), of which Green Bay won four. The remaining two postseason games (’08 NFC Championship, ’12 NFC Divisional) were “stepping stones” for the Giants on their way to Super Bowl titles. All seven contests led to a championship for either team.

Sunday’s contest will be the third playoff meeting between these two teams, all at Lambeau Field.

The most recent playoff contest occurred in 2012. Green Bay finished its regular season with an NFL and team-best 15-1 regular season record. The Packers hosted the Giants in the Divisional round after receiving a first-round bye. The Giants came out victorious, 37-20, and continued their run that concluded with a defeat of the New England Patriots in Super Bowl XLVI.

Prior to Green Bay’s 2012 home playoff loss to the Giants, their previous encounter four years earlier was another contest hosted at Lambeau Field, the 2008 NFC Championship Game.

Green Bay finished the 2008 regular season with a 13-3 record, earning them a first-round bye in the playoffs. Following a decisive 42-20 Divisional round victory against the Seattle Seahawks, the Packers hosted the Giants in the NFC Championship for the right to play in Super Bowl XLII.

The frigid temperatures reached into the negatives as Brett Favre played his final game in a Green Bay uniform. In a game filled with multiple lead changes, Green Bay found themselves trailing 17-20 in the fourth quarter.

The Packers were able to tie the Giants, 20-20, with a Mason Crosby field goal that would eventually send the game to overtime. After a New York Giants interception, the Packers’ Super Bowl hopes were dashed when Lawrence Tynes converted a 47-yard field goal to give the Giants a 23-20 victory.

New York used their momentum from the overtime victory, despite narrowly making the playoffs with just a 9-7 regular season record, to take on the New England Patriots in Super Bowl XLII. The heavily favored Patriots were 16-0 in the regular season and 18-0 heading into the championship game. New York concluded its “Cinderella Season” with a 17-14 upset against the Patriots, earning their third Super Bowl title.

While Green Bay is coming into this game with six straight wins, the Giants have won nine of their last 11 games after starting the season at 2-3. Sunday’s Wild Card matchup is sure to entertain.