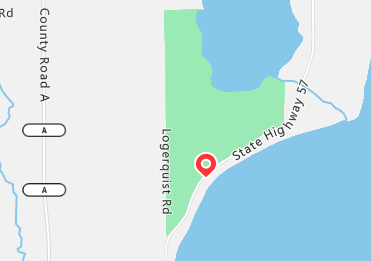 Meridian County Park, at 6799 Hwy 57, lies between Jacksonport and Baileys Harbor. A wayside at the south end of the park is near the 45th parallel, or halfway between the equator and the North Pole.

Groups applaud governor for support of land-preservation and recreation program

To preserve environmentally sensitive land, Door County is finalizing the acquisition of four acres north of an old Highway 57 roadside park. The land stretches north from the park to a curve across from the Door County Land Trust’s Heins Creek Nature Preserve.

Burke Pinney, Door County parks manager, said the two-acre, county-owned rest area and the additional 153 acres in the county’s undeveloped Meridian Park are designated as a State Natural Area, as the additional four acres will also be.

Though a small area, the four acres and Meridian Park are among the most ecologically diverse spots in the county. They are the only known nesting areas in the county for the black-throated blue warbler, and a rare land snail makes its home near the top of four swales and ridges on the new property. Those ridges and three others remain from when the land was shoreline. The geographical features serve as a reminder that Kangaroo Lake was once a bay.

Pinney said that the Meridian Park restrooms are gone, and because the old roadside park abuts a designated wetland, wetland-protection rules and ethics make adding new restrooms difficult. He said the county could someday add a single-stall toilet over a vault.

Almost directly across the peninsula to the west, the county does plan to add portable toilets this spring at the Plum Bottom roadside park along Highway 42 for the convenience of motorists and visitors.

During his February budget address, Gov. Tony Evers surprised and pleased some park, environment, outdoor and recreation enthusiasts when he called for restoration of the Knowles-Nelson Stewardship Program funding to greater levels than in previous years.

Burke Pinney, Door County parks manager, said Evers’ call for the program’s renewal for 10 years and $70 million per year is a “step in the right direction.”

“We would like to see more, and we would always like to see the program made permanent,” Pinney said.

The Door County government used Knowles-Nelson funds for projects such as the 72-acre expansion of Door Bluff Headlands, the northernmost point on the peninsula.

The Nature Conservancy also has a major interest and holdings in Door County – such as its most-visited preserve, Mink River Estuary – and supports Evers’ proposal wholeheartedly.

The governor’s proposal “will ensure that future generations have the same opportunities to enjoy Wisconsin’s beauty and benefit from its natural resources as we do today,” said Elizabeth Koehler, who directs The Nature Conservancy’s work in Wisconsin. “The stewardship program has also proven to be a wise investment in our economy. In 2019 alone, tourism was a $22.2 billion industry, with the outdoor-recreation industry contributing $7.8 billion to the state’s gross domestic product.”

Koehler said that Wisconsin residents and visitors – in 2020 more than ever – sought outdoor activities, resulting in major increases in visits and use of public lands and waters.

“Wisconsinites are also increasingly concerned about the water quality of their lakes, rivers and streams and of their drinking water,” Koehler said. “The stewardship program keeps our waters clean by protecting the forests, wetlands and grasslands that filter out pollutants in runoff before they reach our lakes, rivers and groundwater.”

The Nature Conservancy’s position is that the program renewal needs to be long term and robust because the Knowles-Nelson buying power is not keeping up with the pace of private-development pressure on important sites.

In 2020, state Rep. Joel Kitchens (R-Sturgeon Bay) persuaded legislators to approve a one-year, $33 million renewal of the Knowles-Nelson program. In fall 2020, a poll by New Bridge Strategy and FM3 Research showed that 93% of Wisconsin residents support the program. Prior to that, Kitchens said he hoped he could persuade fellow legislators to approve an extension for longer than one year and a renewal for more than $33 million.

Once unpopular in some property-tax-poor parts of the state, the program gained some Northwoods counties’ support during recent years when the state allowed the use of funds for acquisitions of conservation easements rather than purchases that took lands off the tax rolls.

The program uses public funds to protect land and water and to provide for recreational opportunities and land protection. Since 1992, the program has provided funding for $28.4 million worth of acquisitions and projects in Door County alone, ranging from 80 Door County Land Trust properties to Sturgeon Bay park expansion and Ahnapee State Trail enhancement.