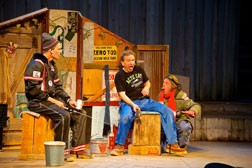 American Folklore Theatre’s Guys On Ice, by Fred Alley and James Kaplan, premiered in Door County in 1998 and has since earned the title “Wisconsin’s Most Beloved Musical.” The story follows the exploits of two ice fishermen, Marvin and Lloyd, as they spend a day on the ice. The show has played to sold-out houses throughout Wisconsin as well as thousands more from Oregon to Massachusetts with Iowa and Minnesota in between.

This summer, Door County’s American Folklore Theatre (AFT) will partner with Wisconsin Public Television (WPT) for a taping of a special production of Guys On Ice at their outdoor amphitheater in Peninsula State Park in Fish Creek.

WPT will record the production during two nights, Aug. 3 and 5, for a broadcast in March 2015. Joining Doug Mancheski as Marvin for this televised performance will be Steve Koehler as Lloyd and Lee Becker as Ernie the Moocher.

Limited reserved seats are available to be in the audience for the taping. Tickets are $27 for adults and $13 for children and teens. Proceeds from ticket sales will benefit the Fred Alley New Musical Fund to help bring AFT’s brand of world premiere musicals to their stage each summer. To be in the audience for this event, call 920.854.6117 or visit folkloretheatre.com.