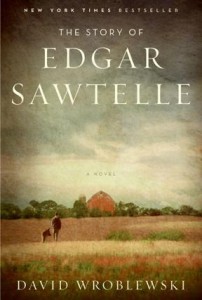 The Story of Edgar Sawtelle

Spoiler Alert: If you haven’t read this book and absolutely intend to do so, stop here. If you think you ought to read it but keep putting it off, continue with this review; your intuition is telling you something. If you’re a cat person who couldn’t care less about dogs, forget about this book. And if you like Shakespeare and care about Hamlet, read the book first then come back to this review after you’ve formed your own opinion about its connections to the play. Reader’s looking for a quick take on the book may skip to the “Snap Book Summary.”

When The Story of Edgar Sawtelle first appeared, Wroblewski was highly praised, especially in Wisconsin. He is a native of this state and his story is set in northern Wisconsin, near Ashland. It is the story of a mute boy, Edgar, whose parents raise a fictional breed of dogs which the family has been developing through several generations of Sawtelles. Early on, Edgar is taken into the process, learning how to care for the dogs, train them, name them, groom them, and, since he is mute, teach them how to respond to commands delivered in sign language. Understandably, he grows very close to the dogs. This sensitivity is symbolized by his attachment to the Kipling Jungle Books, which he signs to the pups.

Ironically, I know something about raising dogs since my father – whose name, coincidentally, was Edgar – raised pedigree Labrador retrievers. So, like Edgar Sawtelle, while a kid, I was taken into the canine cycle of whelping, handling litters, feeding, grooming, cleaning kennels, pre-training and eventually running the dogs in water trials. I loved every minute of it.

I wish I could say the same for The Story of Edgar Sawtelle. There is some fine writing in this book, lyrical, expansive and thoughtful – the best of it coming when Edgar runs away with three yearling dogs and survives to meet Henry, (another coincidence) who knows little of dogs but learns through Edgar to love them. Eventually though, the anthropomorphic romanticizing of the inner lives of dogs is too much for me. I can only think of Cesar Millan, “The Dog Whisperer,” reminding his clients that their pets are dogs, not people.

In the final analysis, however, it is the overlay of the Hamlet story that really irritates me. I find it overdrawn, both melodramatic and farcical, and ultimately manipulative, forcing the reader either into an already fixed emotional response or drawing an inappropriate parallel with the Hamlet original. The whole of the Shakespeare plot is here – one way or another – the murdered father, the father’s ghost including the command “Remember me,” the nasty uncle, irritatingly named Claude, who commits the fratricide and replaces Edgar’s father in his mother’s bed. Polonius appears in the person of the local vet; Ophelia in the form of Edgar’s favorite dog, Almondine!

So then, Wroblewski rides the Hamlet pony to the very end, forcing it over the top when Uncle Claude sneaks up on 14-year-old Edgar in a burning barn and stabs him in the back with a hypodermic needle filled with poison. Ultimately, I look for some kind of redemption in fiction. Finding none in this book, I feel cheated and ill used, especially after 26 dollars and 562 pages!

A far too forced retelling of the Hamlet story featuring a remarkable 14 year old who is mute but nonetheless able to communicate with his dogs through sign language. The boy, Edgar, is pitted against his relentlessly evil uncle Claude who, having murdered Edgar’s father and taken his mother to bed, is determined also to get rid of his nephew in a way commensurate with his despicable cowardice. In other words, beauty and potentiality are destroyed by absolute evil, leaving the reader gaping and flummoxed.