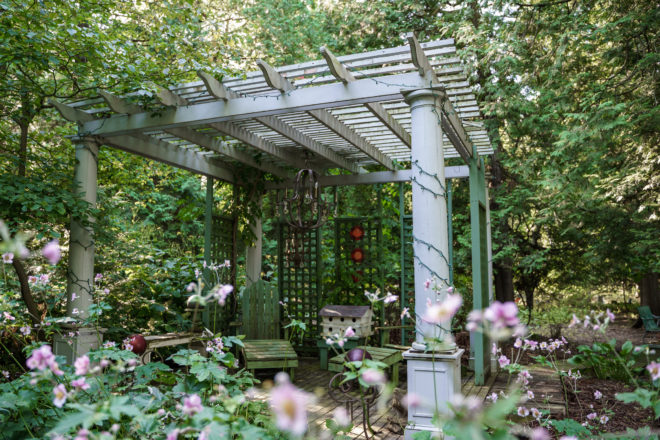 Suppose you’ve retired in Door County from a very busy life. You’ve purchased a little home (actually an old fishing cabin) just steps from the bay, with 40,000 square feet of forested land between your back door and Bay Shore Drive near Sturgeon Bay. It’s time for long morning strolls through the trees and lazy afternoons reading by the bay, right?

Not if you’re Barbara and Doug Henderson, who bought their property as a vacation home in 1973, 19 years before they moved in permanently. Barbara began working at Briggsville Gardens in 1995 and loved being in the greenhouse there, planting seeds and watching them grow.

That was also the year when she and Douglas started gardening on their own property. “There was nothing here,” Barbara said, meaning nothing but a lot of trees, mostly cedar, and one rhubarb plant. “It was all new and fun. Some things were overgrown and needed to be cleared.”

Clearing in Door County involves rocks and more rocks. The 100 feet of the property that abuts Bay Shore Drive was once the original beach of the Niagara Escarpment. They cleared tangled vines, undergrowth and some old cedars.

The Hendersons are not the kind of people who take down trees to cover their property with concrete and asphalt. In 1996, they had a sizable section of their driveway removed and replaced it with 22 wooden platform steps leading down to the house. Stained a soft gray, the steps match other structures on the site and blend into the scene.

Once the step construction and remodeling that opened up the house were completed, Barbara, an accomplished artist; and Douglas, an award-winning photographer, looked up the hill and realized what a huge “canvas” was still available to them.

They started with lots of hostas along the steps for two reasons: They’re shade-loving plants with leaves in contrasting colors, textures and shapes; and they require less effort to maintain than flowering plants.

During the 24 years since then, Doug and Barbara have created a series of “rooms,” working up the slope from the house.

“We didn’t exactly intend to,” Barbara said, “but it was so much fun, we just kept going.”

Because zoning rules prohibit adding on to the small house, they converted the garage near the road into a studio/guest house. And they spruced up an old garden shed with reclaimed windows and French doors to create a setting for the wicker rockers Barbara inherited from her grandfather.

The other “rooms” they’ve created have no roofs; most have no semblance of walls; but all of them have doors, though not the traditional kind.

Sometimes the door is as obvious as a repurposed iron fireplace screen that serves as a gate to a stone-paved area that’s lush with green plants. Other times, a door is just an opening framed with foliage that leads into an area containing a fountain that Doug created or a large, white stone swan on a pedestal, both adorned with brilliant glass mosaics, one of Barbara’s hobbies. The mosaics, some made from broken dishes inherited from both sides of their family, also cover concrete garden benches, stepping-stones, birdbaths and planters.

There are seven of these rooms on the steep slope between the house and the studio/guesthouse, including a spacious pergola framed with reclaimed porch columns and centered with a thrift-store chandelier; towers of old bowling balls (about 80 of them, mostly given by friends), drilled and strung on poles and otherwise artfully arranged; and an old boat dock that’s been turned into a hillside outlook adorned with more bowling balls perched on painted chimney flues and bordered by a rusty metal sculpture from a long-closed mini-golf course.

The couple has an eye for playful design and a reverence for preserving and repurposing old architectural elements. For example, there are used bricks that serve as pavers; reclaimed windows, doors, posts and other items that once served elsewhere; and (unused) septic-tank collars sunk into the ground to frame plantings and bits of whimsical art. Vintage birdhouses, mirrors and old signs from Door County businesses such as Thumb Fun and the Nightingale Supper Club are posted here and there.

It’s all held together with a soft green and red palette of paint and plants. Hostas continue to fill much of the space, contrasted by varieties of begonias, fuchsias, coleus, sweet-potato vines and flashes of yellow from foxglove and calibrachoa (described as petunias on steroids!).

Additions to the scene during recent years are fused-glass spirit masks: the product of Doug and Barbara’s interest in an art form that entails heating pieces of glass to 1,465 F in a kiln for many hours until they fuse, then firing them again to mold the glass into shapes. Their work is represented not only in the spirits, but also in the bouquet of flowers on the table in the pergola, in a birdbath and in individual flowers that decorate latticework.

Do the Hendersons plan to create more of their amazing garden rooms? “Oh, we never plan,” Barbara said. And Doug added, “We don’t even know how things will look next week.”