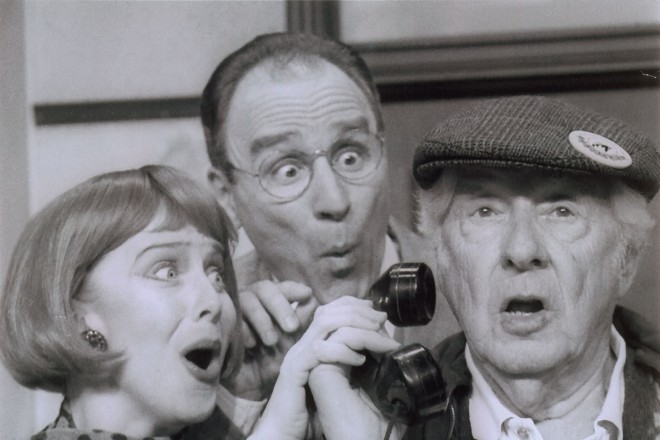 “There’s no business like show business!” “Two planks, a board, and a passion!” “The show must go on!” No other art form has traditions like those of the theatre. The stories are legion of how, in the midst of impossible conditions, the curtain always goes up. Actors tease that if they don’t show up for a performance, it’s because they’re “lying dead in the street.” Door County’s own Peninsula Players, “The Theatre in a Garden,” is about to celebrate its 70th birthday and attention must be paid to the two families responsible for embodying the traditions of the theatre: the Fisher-Rathbones who started it, and the McKenzies who never let it die.

Caroline Fisher (later Rathbone when she married the son of actor Basil Rathbone) fell in love with the theatre when she saw her brother, Richard, performing in Romeo and Juliet as a student at Northwestern University. The brother and sister team along with younger sibling, Margo, prevailed upon Mama and Papa Fisher to start their own theatre. The family had stayed at the Bonnie Brook Hotel in Fish Creek when Papa (C.R. Fisher, an inventor and engineer) came to Sturgeon Bay on business. The backyard of the hotel happened to be configured like an amphitheatre so Caroline and Richie rented it from Mrs. Hedwiga Welcker Brigl, the owner of Bonnie Brook, and it was there on July 25, 1935 that they produced their first season of five plays, opening with Hay Fever, a Noel Coward comedy. With the exception of a hiatus during World War II, the summer theatre has continued to the present.

Today, it is a well-oiled machine run exquisitely by two men with impressive Players’ credentials: Executive Producer Todd Schmidt, and Artistic Director Greg Vinkler. They are backed by The Peninsula Players Theatre Foundation, Inc. formed in 1968 as a not-for-profit corporation. Except for capital improvements, the theatre survives on box office alone. That fact is something to be proud of but it took dedication and that “show must go on” mentality on the part of all who went before to get to this point.

The tales are told of Caroline Fisher’s enthusiastic promotion of the plays. She made friends with everyone in the community and the first place Caroline would “hit” each summer for subscribers and donations was the famous Cottage Row in Fish Creek where most of the residents were millionaires. She often took one of the actors along with her to help sell; Bob Thompson was one of them. Bob, age 88, and the source of much of this information, now lives with his wife Margaret in Sister Bay and has published his life story, An Actor’s Life: It’s Better Than Selling Shoes written with Kerstin Connor. Bob began acting with the Players in 1938 and remembers Caroline fondly: “Caroline Rathbone was the most magnetic person I have ever met, she could charm a blade of grass, she was incredible — everyone was in love with her.” (Later, Amy McKenzie would seem to be the reincarnation of Caroline, exhibiting that same chutzpah when she founded “The Third Avenue Playhouse” in Sturgeon Bay in 1999.)

That first 1935 season was not a money maker for the Fishers, but they bought an old boy’s camp (now, the present location of Peninsula Players) and worked the entire second summer of 1936 fixing it up so they could open for a full season of plays in 1937. Papa Fisher had some money but the story goes that Caroline, a John Robert Powers model in Chicago, met someone at a party at the Drake Hotel and charmed him into donating $24,000 to the cause!

Bob Thompson’s description of the Fishers is a delightful first hand account of those early days:

“What brass those Fishers had-starting a theatre in an unknown area of Wisconsin in the middle of a depression!…Mama Fisher, the mad Prussian, was cook…she played German Lieder records as she cooked and designed/cut/sewed costumes….Papa, the lanky, mad genius, we secretly called him, fixed things, drank coffee from a saucer, smoked cigars incessantly and when cajoled into service as an actor, did so as C. Raeburn Fyfe….He was around but never took this whole theatre venture too seriously….Caroline, a beauty in any condition, dynamic, volatile, heart full of compassion, couldn’t act and knew it. Brother Richard didn’t agree. He adapted plays to star his sister. He directed, worked in his flower garden, wrote reviews, had a crew cut, and was adored by the fomi!y. Richie was the genius, they all agreed. Margie was a voluptuous beauty to whom the family never paid much attention. She acted on occasion but being the youngest didn’t stand much of a chance with the competition.”

Margo, or Margie, later knocked the socks off Bob when he shared the stage with her in a production of Salome and watched her “Dance of the 7 Veils” every night which by all accounts was scandalous!

The Fisher/Rathbones endured, producing a ten-play season for years. There are wonderful stories, of course, of how Caroline “deep sixed” all the financial records, literally threw them in the bay to show the board who was really in charge. The company finally was able to afford a tarp over the stage to stop the rains but needed the help of the actors and technicians and even the audience members to hold the tarp down when it was windy. Caroline realized her final dream for the Players when the present pavilion was built in 1957, but this came at the expense of bankruptcy. She had to sell her beloved theatre to an attorney friend who, either through his own connection or as a result of a strong suggestion from Caroline, brought in Jim McKenzie to run the theatre. And run it he did with the help of his family and a member of the Door County community, Tom Birmingham (whose son Tom Jr. provided information for this article). Jim was the brilliantly creative overseer and Tom was a genius in finance, besides being an educator and theatre buff.

McKenzie had been part of the Players since he was an apprentice in 1947 and, in fact, met his actress wife Jeanne Bolan there. They had three children: David, Kevin and Amy. Jeanne acted as general manager to Jim’s executive producer until she died in 1976. It was then that Tom Birmingham, who had been associated with the Players as actor and Public Relations Director, was named General Manager by McKenzie. The early McKenzie years were years of small audiences and little money. Amy remembers, “In the early days we would be dropped off in Fish Creek with a huge stack of fliers and wander the streets looking for tourists. Few people knew about the Players back then so it was a crucial job; if we did not have enough people, the show would have to be cancelled. Over time I became fearless and would speak to anyone anywhere, driven by the knowledge that the theatre’s survival depended on our success ‘out in the field.’ The rule of thumb was simple. There had to be at least as many people in the audience as there were on stage so each person that came through the door was an important victory.”

These financial struggles were slowly eliminated. McKenzie, as a producer, was based both in New York and San Francisco and had many professional connections. In 1955 for example, there was an apprentice at the Players who later became Neil Simon’s agent and consequently this little provincial theatre in Fish Creek, Wisconsin could obtain the rights to Simon’s latest hits ahead of anyone else.

In 1978 McKenzie was able to purchase the theatre from the attorney who had bought it from Caroline in 1960. It continued to be operated by Jim, Tom Birmingham and their board, but when capital funding was required for much needed renovations Jim sold it to the Players Foundation and remained as Executive Producer.

Today this gem of a theatre, so lovingly nurtured by these two families is about to embark on another adventure. The Theatre Foundation has been responsible for the financial operation of the theatre since the late ’60s and improvements have been made such as new actors’ residences, enlarged rehearsal space, updated box office etc. But there are severe limitations to the stage itself which is the next area of improvement Todd Schmidt and his board will concentrate on. All of those loyal subscribers to the Players who sign up even before the season is announced have nothing to fear. As Todd points out, “We plan to improve the facilities but it’s going to be the same funky northwoods theatre. We don’t want to clean it up and make it Disneyland.”

Perhaps the next time you visit the Players, you will imagine Caroline welcoming you, taking you to your seat and chatting all the while about what a wonderful evening is in store for you. Or as you watch the sunset, after picnicking under the giant cedars, you will see Mama and Papa smiling down remembering all that went before. As you stroll from the bay through the exquisite gardens toward the stagehouse remember Richie Fisher, the first gardener, followed by Jake Voicheck who then passed it into the loving hands of today’s landscape artist, Bob Kayser. Finally, as the curtain rises, you may see (in the flesh) the wonderful actress and actor, both directors as well, who helped keep the shows going during the rough times: Amy McKenzie and Bob Thompson. You are participating in “America’s Oldest Professional Resident Summer Theatre,” and when the curtain goes up and the magic begins, remember all those who came before, who kept the tradition of theatre alive so the Peninsula Players could begin its next 70 years.