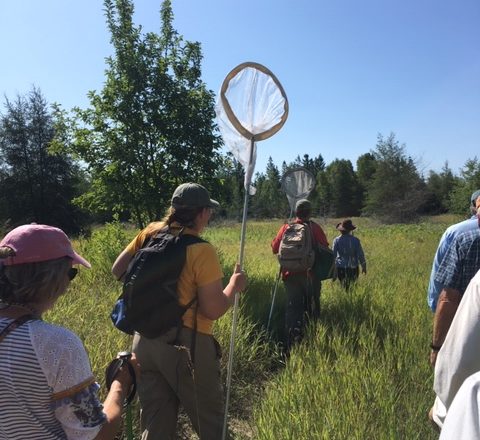 You may be surprised to learn that Door County hosts a single federally endangered species: the Hine’s emerald dragonfly. And it turns out that these metallic, green fliers can be seen on the peninsula like nowhere else in the world: in swarms.

This dragonfly can be identified by its bright, metallic, green eyes and dark body, with yellow stripes on its sides. Ever heard the phrase, “It’s not easy being green?” Well, it’s not easy for these dragonflies, but not because of their appearance.

Participants in a recent observation hike with the Door County Land Trust learned why from hike leader Dan Soluk and his University of South Dakota research team. During the hike at the north end of Mud Lake on Aug. 1, participants got exercise and learned about the patterns of this dragonfly along the way.

According to the U.S. Fish & Wildlife Service (USFWS), habitat destruction and degradation have been the biggest threats to the dragonflies’ survival. Many wetland areas where they’ve thrived in the past have been destroyed to pave the way – literally – for urban and industrial development.

The Hine’s emerald dragonfly can now be found only in Wisconsin, Illinois, Michigan and Missouri, but the USFWS said they were historically found in Alabama, Indiana and Ohio before they were “probably extirpated.”

Soluk noted that these dragonflies are plentiful in Door County because of the amount of preserved land in locations such as Mud Lake, The Ridges and Toft Point. (The land trust’s Jesse Koyen and Drew Reinke said the dragonflies have actually been deciding factors in land-preservation efforts.) There are more of the dragonflies here than there are in entire states, Soluk said, and Mud Lake – with its cedar swamps, springs and creeks – was a perfect area to go looking for them.

Another reason why it’s not easy for these creatures is their life cycle: The larvae live up to four or five years in that stage; the living environment for larvae is quite specific; and the adult lifespan is no more than six weeks.

Soluk described how the females lay eggs in shallow water when the area floods in the spring, then the land dries out for a couple of months during the summer. The larvae spend the duration of their four to five years in the water, even through the winter, but they can survive out of the water for up to a week. It’s bad news for them, though, if it gets too dry or the water freezes over.

They do have one savior: crawfish. Although crawfish are considered predators, dragonflies have been able to hide out undetected in crawfish dens during the dry spells and winter months.

Speaking of predators, you can add birds, spiders, fish, reptiles, amphibians and cars to the list. Soluk said that more Hine’s emerald dragonflies are killed on County Road Q than in the entire state of Illinois. This is partly the dragonflies’ fault. Though they have the ability to fly above the treeline, they often fly down roads instead, leaving them vulnerable to collisions with cars.

During the hike, we explored open, sunny meadows, which offered perfect conditions for the Hine’s emerald dragonfly. Still, the group came across only three or four, none of which allowed us to catch them in our nets for closer observation.

We mostly saw the common green darner dragonfly buzzing around, which left some in the group saying, “Darn-ernt.”