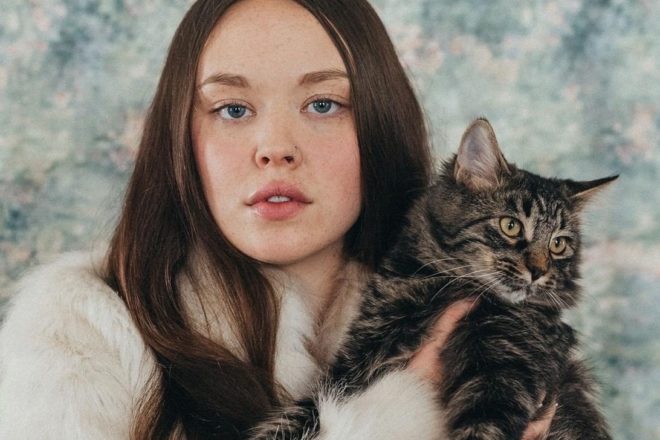 Genevieve Heyward has collaborated in recording and performing as close as the Holiday Music Motel in Sturgeon Bay, and as far away as Norway during her 2019 tour with her band, The North. Submitted.

Genevieve Heyward is a multi-talented musician whose jazz and opera vocal training was clearly on display during a recent performance in Algoma. That’s a bit of a trek from Washington Island, where she spent a lot of time while growing up and sang with a three-piece jazz band. She also competed in high school jazz competitions back at home in Lake Geneva.

Although Heyward’s current music isn’t opera, it was clear that her experience with such a challenging singing style gave her the skills she has now to sing with bold volume, intonation and vibrato in any genre.

In Algoma, she confidently stood out against the backdrop of the small town: she took the stage solo, dressed in a flowy skirt, black lace-detailed shirt and statement earrings against her long, two-toned hair. Then her dynamic guitar and piano skills melded with her original songwriting and smooth voice.

Heyward selected songs with earnest lyrics that tugged at the emotions, propelling a melancholic theme with originals such as “Anxiety” and “Motel Sign.” But even the most sorrowful tunes somehow suited the sunny day well – a juxtaposition reinforced by Heyward’s passionate and honest singing with a voice that seemed as though it would reach across the entire peninsula. Her vocals carried down the river and up the hill, spilling into the downtown streets.

Heyward said she doesn’t prepare a strict set list when performing solo. Instead, she plays whatever song feels right in the moment, yet maintains logical transitions and order. She alternated between her two instruments, playing stretches of folkier tunes on her guitar and jazzier vibes on the piano.

Heyward played songs from some of her greatest inspirations, such as Elton John and Ella Fitzgerald. She dedicated “Space Oddity” to David Bowie, Fleetwood Mac’s “Landslide” to her mom and “A Day in the Life” by the Beatles to her dad.

Between songs, she genuinely engaged with her audience, clearly content to introduce nearly every song and simply be herself: “If there’s a fun fact you should know about me, it’s that I love wine,” Heyward said.

And wine was plentiful at the venue along the Ahnapee River because von Stiehl Winery was hosting her performance at the bottom of a grassy hill just below its outdoor bar service area. Heyward performed as the river flowed just a few feet away.

Interestingly, The River is the title of her second EP, released in 2019. She toured the album with her band The North in Norway, then recorded her 2020 The Norway EP while in the country. Copies of The River were available for purchase during the Algoma performance, as well as T-shirts printed in black and white with her music logo’s floral design.

These days, Heyward plays a few shows per week compared to her pre-pandemic average of six or seven. She finds that both she and the audience have more excitement and focus when shows are scheduled further apart.

“It’s been really nice to play [again] and have this balanced lifestyle,” she said.

Heyward intended to conclude her performance with her original “This Is How It’s Supposed to End,” but she decided to follow it with just one more: a tune from the Dark Songs songwriting collaboration hosted by the Holiday Music Motel.

Genevieve Heyward will return to von Stiehl Winery on Friday, Aug. 20, 2-5 pm, and will play at Sail Door County in Sister Bay on Saturday, Aug. 21, 1 pm.