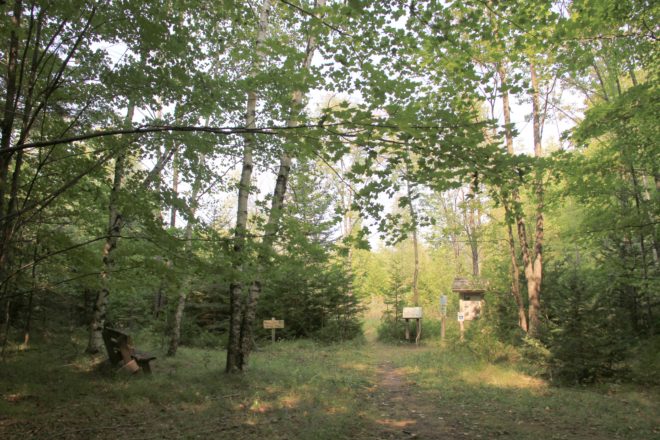 After a short hike into the preserve, hikers may go left, straight or right. I recommend going left or straight to finish the hike on the western side of the preserve and on an ascent out of the basin. Photo by Aleah Kidd.

The historic acreage that makes up this preserve near the heart of Ephraim has been in the Anderson family name since 1858. It was in that year when Aslag Anderson, a hardworking Norwegian, was hired by Ephraim’s founder, Rev. Andreas Iverson, to build a large pier for the fledgling community. The pier he created is now known as Anderson Dock. In exchange for the work, Anderson received the opportunity to purchase 110 acres of land at $1.15 per acre.

Anderson cleared land around a pond to create a farm, and you can still see remnants of it from the trails. Look for a sign near an open area that was once a pasture, and a stack of old timbers that are remains of a farm building that was in operation into the 1950s. In 2005, descendents of Aslag and Anna Anderson gave the land to the Door County Land Trust for wildlife preservation.

Hiking trails loop the land, going through the lower areas near the pond on the eastern side, and staying higher along old farmland and prairie on the western side. Nearby Moravia Street, which parallels the west hiking-trail section, runs along an old bedrock shoreline from a time when the lake levels were much higher.

Today, the preserve acts as a basin that collects water each year after the snow melts. The melts fill the pond to varying levels, then slowly drain to Green Bay through the bedrock, providing important wetland habitat for migrating and nesting birds.

As you’d guess, some areas of the preserve are very wet during the early spring and summer, but now – during autumn – there’s less water, and the trails are relatively dry.

I recommend beginning your hike on the left or middle trail (rather than the right one) so that you finish by ascending out of the basin. That option offers stunning views of the surrounding geological features.

Soon you can expect the groves of trees to become a bright-yellow and orange backdrop as you hike through the northern intersection of trails. In the lower sections near the pond, you’ll find a northern hardwood swamp that includes black ash, basswood, red maple and crack willow.