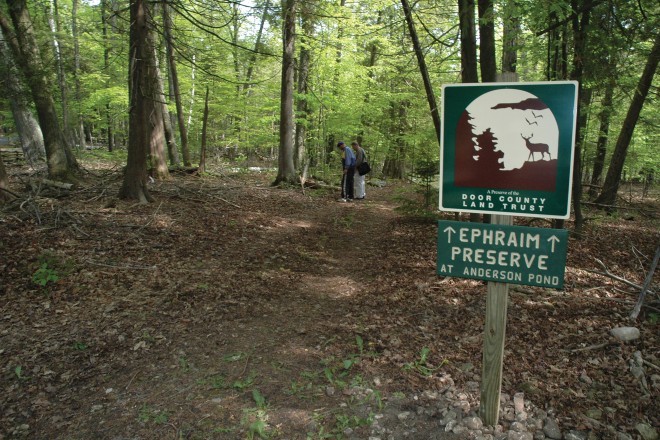 The Village of Ephraim is renowned for its beauty – its white buildings gracefully nestled amidst a stunning natural backdrop, facing another Door County treasure, Peninsula State Park. Until recently, however, other than the wetland preserve on the south end of the village, little environmentally significant land in Ephraim was in permanent conservation status and protected for public use.

That changed in January 2006, when the Door County Land Trust purchased most of the remaining acreage of the historic Aslag Anderson farmstead. The Land Trust purchased the farmstead, which dates back to 1858, in order to establish the Ephraim Preserve at Anderson Pond. Located along Moravia Street, just east of Highway 42, this historically and ecologically significant 27-acre property offers tremendous scenic views. Land Trust Executive Director Dan Burke notes, “It also hosts a wide diversity of wildlife habitat, including Niagara Escarpment bluffs, an old beach ridge, forest, meadow, wetlands, and, as its centerpiece, a spring-fed pond. The property is part of the Ephraim Preserve Project Area, which has officially been designated a State of Wisconsin Habitat Area.”

Approaching from Moravia Street, a large stretch of the preserve’s forested space is visible. Upon entering the property and moving toward the interior, the Niagara Escarpment, which cuts through the eastern and southern portions of the acreage, becomes evident. The escarpment is a massive limestone ledge formed by glacial ice and erosion that extends over 900 miles through Canada, ending at Niagara Falls. It forms the backbone of the entire Door Peninsula. Besides being of geological interest, the escarpment is prime habitat for rare and endangered land snails.

An old beach ridge runs along the entire length of the western boundary, while forest and transitional woods make up much of the interior portions. The center of the property is dominated by wetlands surrounding a large, open pond fluctuating in size from six acres in spring to one acre in late fall. Several old-growth hemlocks are also located in the preserve.

Recorded history regarding the land comprising the Ephraim Preserve at Anderson Pond begins in 1853, the year that Norwegian missionary Reverend Andreas Iverson arrived at Eagle Harbor. He was looking for land on which to establish a community for his small Moravian congregation. Struck by both the beauty and the potential of the densely forested wilderness, he purchased 425 acres from the United States Government. He spent $500 on the property, which extended for one mile along the shore and three-quarters of a mile inland.

Reverend Iverson and his congregation established a tiny village on this acreage, which they named Ephraim. The villagers persevered despite being plagued by sickness, crop failure, isolation, and bitterly cold winters. Other immigrants quickly began to arrive in the area, including an ambitious and hard-working Norwegian named Aslag Anderson.

Since the area was accessible only by water, it had become evident to the villagers that a deep-water pier was a necessity for the community. In 1858, Iverson entered into an agreement with Anderson. Anderson agreed to build a pier to which all settlers would have access. In exchange, Iverson sold him 110 acres of the original 425 acres, at his original purchase cost of $1.15 per acre. The 27 acres which is now the preserve was part of Anderson’s original 110-acre purchase, and has been owned by members of the Anderson family ever since.

Anderson fulfilled his end of the bargain by completing a substantial pier in 1859. He also built a home on the section of his 110 acres that lay near the shore, a building now housing The Anderson House Work Bench. In addition, he constructed a barn, now a museum, and a general store, now The Anderson Store/Museum. Further inland, east of what is now Moravia Street, he cleared land around a pond for farming.

That pond and its surroundings are the site of the Land Trust’s Ephraim Preserve at Anderson Pond. Once a farm, it is now a refuge for migrating and nesting birds. Numerous wildflowers bloom there throughout the spring and summer, and magnificent old-growth trees stand on portions of the land that were never cleared.

The Door County Land Trust worked to raise the funds to acquire the Anderson farmstead for 14 months, although the idea of establishing a preserve on that land has been floating around for many years. Bob Davis, an Ephraim resident and avid volunteer with the Land Trust, has known the Anderson “kids,” as he describes them, “for a long, long time.” He says he told them over the years that if they were ever thinking of doing something with the property to let him know, because he felt sure that he could help raise some money to preserve it.

That is exactly what happened – a few years ago the Anderson family descendants approached Bob to let him know they were thinking of selling the land. Bob immediately approached the Land Trust regarding the opportunity to purchase it and establish a new preserve in Ephraim.

The Door County Land Trust received a significant grant from the Knowles/Nelson State Stewardship Fund for the purchase of the Anderson property. Bob Davis hiked the land with the Wisconsin Department of Natural Resources (DNR) staff team that conducted the environmental appraisal of the property for the purposes of deciding whether or not the Land Trust should receive a stewardship grant. Bob recounts, “While we were going by the pond, a Hooded Merganser flew out of the pond right in front of us! This is a relatively rare bird, so it was just as if somebody had planted it there specifically for the DNR staff tour.” Bob also notes that a long-time neighbor to the Anderson land, an avid birder, was able to provide the DNR with 30 years’ worth of her records of bird sightings in that area, which surely impressed the DNR staff.

Whether due to the perfectly-timed Hooded Merganser sighting, the birding records spanning 30 years, the DNR staff’s own inventory of the land, or all of the above, a stewardship grant was awarded to the Door County Land Trust for purchase of the Anderson property. The grant amount was equal to roughly half of the funds needed to purchase the land. The Land Trust was able to match these grants with a small grant from the Door County Green Fund and from close to 100 contributions from Ephraim area residents.

Land Trust staff, Bob Davis, and other volunteers were actively involved in the fundraising effort with Ephraim residents and property owners. Their approach was simple:  send a letter to Ephraim residents who might be interested in supporting the establishment of the Anderson property as a permanent preserve, and then visit them individually to encourage their support and answer any questions. Bob says, “The response from Ephraim residents – and not just from the property’s immediate neighbors – was really very gratifying. We knew going into this effort that residents here appreciated the history and the scenic integrity of their village, but the enthusiastic response we received for this project far exceeded even my expectations.”

Burke echoes Davis’ sentiments, noting, “The Land Trust is now honored to make this special place available to the residents and visitors of Door County. So many people came forward to help with this purchase. Because of their efforts and financial support, not only is an irreplaceable piece of Ephraim’s past preserved, but also a quiet, beautiful wildlife sanctuary home to a variety of plants and animals will remain undeveloped forever.” Burke also extends his “thanks to today’s Anderson family members, whose cooperation and efforts ensure that this historic piece of land will retain its connection with the Anderson family name and forever remain a place of beauty and solitude.”

The Door County Land Trust will own and manage the Ephraim Preserve at Anderson Pond as a nature sanctuary open to the public. The preserve is an excellent site for people interested in wildflowers or birdwatching – it is home to nest waterfowl, including Hooded Mergansers, and to dozens of species of migratory songbirds.

A rustic trail system is being established at the preserve. The trails, which Land Trust staff and volunteers expect to complete this summer, will be available for hiking, snowshoeing, and cross-country skiing. Please contact the Land Trust if you wish to help staff and other volunteers work on establishing the trail system.

A kiosk will be erected at the trailhead to help tell the story of the land and to thank all the people who were instrumental in helping to successfully complete this project. The Land Trust is also developing a land management plan – as they do for all properties they own and/or manage – to guide future restoration and management activities.

The Door County Land Trust is a not-for-profit conservation organization that is celebrating its 20th year of preserving lands that contribute significantly to Door County’s rural, scenic, and ecological integrity. If you are interested in becoming a member, or if you would like to find out more about the Door County Land Trust, visit their web site at www.doorcountylandtrust.org or call either the Sturgeon Bay or Baileys Harbor offices, (920) 746-1359 and (920) 839-9990, respectively. The Land Trust’s mailing address is P.O. Box 345, Ephraim, WI, 54211.

Executive Director Dan Burke states, “The Door County Land Trust was established in 1986 with the mission of protecting, preserving and maintaining lands that contribute significantly to the scenic beauty and ecological integrity of Door County.” He explains that to fulfill this mission, the Land Trust enters into voluntary conservation easement agreements with property owners and also purchases properties outright. Burke notes that maps are available depicting the locations of the properties the Land Trust owns and manages that are open to various types of public recreation, such as hiking, canoeing, and hunting.