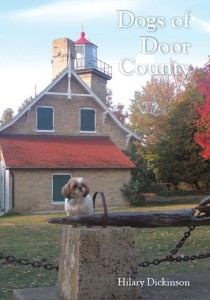 She took a moment to speak with Sally Slattery about the project:

Sally Slattery (SS): What keeps you coming back to Door County?

Hilary Dickinson (HD): I’ve visited Door County at least once a summer for as long as I can remember. I shop in all the quaint stores, mini golf at Pirate’s Cove, ride bikes in Peninsula State Park, and so much more. Door County is such a beautiful, tranquil place.

SS: Tell me about your love of dogs.

HD: We’re all big dog lovers in my family, and I always had dogs growing up. Dolly, a Shih Tzu, was my beloved childhood pet whom I mention in my book’s dedication. My current dogs are Riley and Randy, Shih Tzu/Maltese mixes who are brothers.

SS: Where did the idea for Dogs of Door County come about?

HD: I am a writer and photographer, and I thought the book would be a fun way to blend my love for dogs and Door County. I got the idea for the book during Memorial Day Weekend of 2012, and then I came up three more times (Fourth of July weekend, Labor Day weekend, and the weekend of Pumpkin Patch) to photograph the dogs and interview their owners. It was of course fun to interact with all the cute dogs, but I also feel like I’ve made a lot of friends in the owners.

SS: How did you go about finding the dogs that appear in your book?

HD: I mostly just walked around Door County looking for dogs out and about with their owners, and I discovered that they were everywhere! Exactly 200 dogs are featured in the book. I found them lounging on boats in the Sister Bay Marina, strolling the streets of Fish Creek, mingling at Pumpkin Patch in Egg Harbor, and slurping sundaes outside Wilson’s in Ephraim. I love that Door County is such a dog-friendly community. 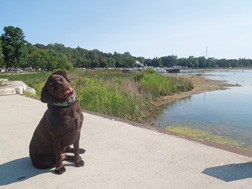 SS: Were the dogs natural posers for their shoots?

HD: Yes, they were such great models! One in particular is Mocha, a Chocolate Lab from Brodhead, Wis., who I photographed in front of the shore in Ephraim. She has an adorable signature head tilt move. As I sifted through my photos after each trip, I was always struck by how happy all the dogs look. There’s definitely a lot of smiling dogs in the book.

SS: What are you currently working on?

HD: I am currently wrapping up a nonfiction short story collection about Wisconsin law enforcement officers’ most memorable calls. The book, which as of now is tentatively titled Wisconsin Police Stories, is scheduled to be released by Big Earth Publishing in October. I’m really excited about this book as well. It details intense, risky calls, but it also sheds a lot of light on what it’s like to be a police officer and how these harrowing calls affect them.

Dogs of Door County can be found in over twenty gift shops and bookstores throughout Carlsville, Egg Harbor, Fish Creek, Ephraim, Sister Bay, Ellison Bay, Gills Rock, and Baileys Harbor. The book can be ordered online as well at dogsofdoorcounty.com where viewers can also find Dog of the Week photos and fun facts about the dogs featured in the book.