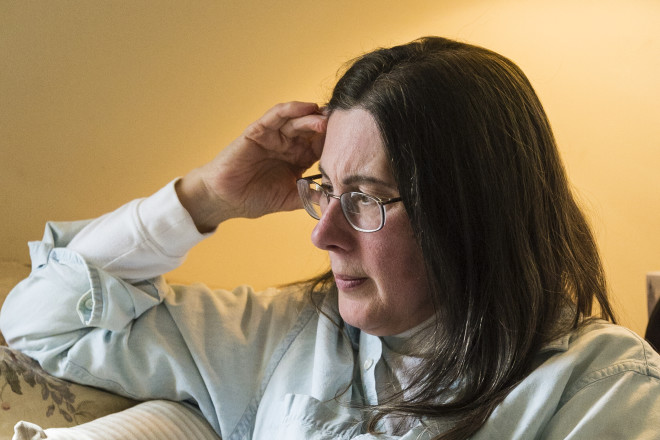 Deb Dendler has always had an interest in using her artistic talents to demonstrate the human condition. It is evident in the dozens of terracotta, bronze and relief sculptures lining the shelves of her countryside art studio in Fish Creek.

These sculptures are more than lumps of clay, porcelain and bronze shaped to represent her observations of human and animal life the past 40 years. For Dendler, they are her way of helping the modern world retain the human elements of life. These sculptures of mothers and their children, napping chefs and poised dancers are her answer to the question, “What does it mean to be human?”

Dendler is not interested in being cutting edge. Since graduating from the Pennsylvania Academy of the Fine Arts in 1977 with a degree in sculpture, she has seen art trends go from abstract expressionism and pop art to today’s hyperrealism.

Her representational figurative sculptures have never been on-trend and after a formative youth growing up in the New York art scene and being exposed to “the vagaries of taste and fashion,” she certainly doesn’t mind.

“One thing that it did was convince me that the art world is insane because it’s all based on fashion…it’s very silly,” Dendler said. “Consequently, I pay no attention to any of it and do what I think is good.”

For her, that is art created by studying from life, something Dendler does often with sketchbook and pen in hand. As she learned at the art academy, when a sculptor does a drawing, they are not making pictures. They are making a diagram.

“Anything that expresses dimensionality – the lights and shadows, the lines, the contours – that’s what’s important to a sculptor,” Dendler said. 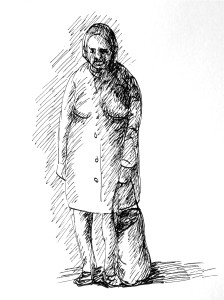 Despite serving as a blueprint for future works, Dendler’s sketches are more than just lines on paper. There is a humanness to them, perhaps only achieved because the subject was oblivious to being the center of Dendler’s world for the few moments it took to immortalize the scene on paper.

Though “vulnerable” comes to mind when flipping through the aptly named images, “Waiting In Airport,” “Airport Sleeper,” and “Texting on the T,” Dendler is not exploiting anyone – she is simply passing time by capturing the raw little moments of everyday life.

“What interests me are all the different examples of every possible kind of person: good health or bad health, young, old, rich, poor – just the whole spectrum,” Dendler said. “The more I draw people, the more it seems like there is of every person that you see going by. There’s the story, there’s the whole thing right there in their face.”

Sometimes these sketches find their way into Dendler’s studio and become a permanent three-dimensional sculpture. Shopper, a sketch of a lowly woman barely clasping the thin straps of a shopping bag resting on the floor, is one such piece.

While the shadows on the woman’s face and behind her back did not transfer to the bronze form, her poignant posture did.

Alicia Mulliken, longtime friend of Dendlers, recalls seeing Shopper in bronze form for the very first time and likens it to her first view of Edgar Degas’ 1881 mixed-media sculpture, The Little Fourteen-Year-Old Dancer, which depicts a young female student of the Paris Opera Ballet.

“I just got so emotional, I couldn’t stand it,” Mulliken recalled. “It just said so much in that little teeny figure.” 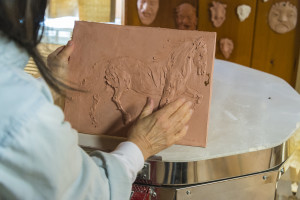 It also says a great deal about the private, soft-spoken artist behind the work who has long struggled to see how her art evokes emotion and who holds firm that the sculpture she is most proud of is “the next one, because it’s the only one that’s flawless.”

It may sound like Dendler doesn’t believe in her own abilities but in sharing her 40-year journey with art, it quickly becomes clear that today, she is the most confident she has ever been.

Born in Chicago, Dendler lived in 13 places before the age of five due to her father’s career in chemical engineering. When she was entering 10th grade, Dendler’s family moved to Westchester County, a 20-minute train ride from Manhattan and The Metropolitan Museum of Art (also called “the Met”).

The young Dendler frequently skipped class to hop a train to the museum and was often the only person in the building, which in the mid-1960s, was not uncommon.

“I’m not sorry because you couldn’t actually do that anymore,” she said. “When I’ve been to the Met since then, it’s packed … it’s become a world-renowned museum. Back then, New York wasn’t the center of the art world yet.”

But it was the center of Dendler’s art world. 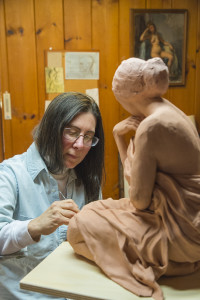 She recalls being at the New York World’s Fair and seeing Michelangelo’s Pietà, the world-famous marble sculpture depicting the body of Jesus in Mary’s lap after the Crucifixion.

“I just thought it was the most beautiful thing I’d ever seen,” Dendler said.

It didn’t occur to Dendler that she was capable of being a sculptor herself until two years into her education at the Pennsylvania Academy of the Fine Arts.

“I actually started out wanting to paint so I painted for a couple of years and discovered that I was much, much better at sculpture,” Dendler said. “Moving from the painting studios to the sculpture studios was like that part of The Wizard of Oz where everything turns to color.”

She was immediately good at sculpture and was awarded a full scholarship at the academy to finish her degree in the art form.

Despite a childhood of frequent moves, there was one constant in Dendler’s life: summer vacations in Door County. It was during one such vacation with her former husband in the late 1970s that Dendler decided to lay her roots here.

Like most Door County artists who got their start here back then, The Hardy Gallery became a very important venue for her. Her reserved personality proved difficult in a time when self-promotion wasn’t as easy as setting up a professional website, but she still thrived creating sculptures, exhibiting in galleries, and taking on commissions.

She obtained her own studio on her land and worked diligently on sculptures and drawings while waitressing, exhibiting widely throughout the peninsula, raising her two children, and teaching sculpture at Peninsula Art School from 1983 until 1996. 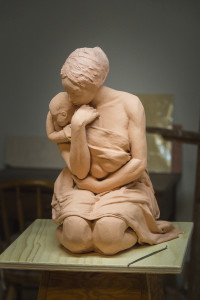 It was then that, faced with a number of life-threatening family illnesses, Dendler’s work disappeared from public exhibits and her life as a sculptor halted.

Dendler credits her cancer diagnosis, first in 1995 and then again in 2006, and the subsequent tests, scans and doctors for being her wake-up call.

“I had the experience several times of thinking I only had a short amount of time left,” Dendler said. “That was wrong but I didn’t know that. I thought, ‘Okay, this is what I want to do. I want to make that sculpture.’ That was what really surprised me. I was like, ‘Okay, I’ve got six months to live. What do I want to do? Well then I want to goof around. If I’ve got two years to live, then I want to get some sculpture done.’ It was very clarifying.”

The confident artist had emerged. In 2012, Dendler launched a website and has since been accepted into more than two-dozen exhibits across the world. She has taken top honors for her work throughout the East Coast and has been emboldened to take risks in creating art – the same type of risks her teenage self took just to be exposed to it.

“Taking all that time off, I guess I really thought about it – what I wanted to do, what I didn’t want to do, and I realized that I had been very childish actually when I was showing my work here,” Dendler said. “I would really be offended by not being accepted in a show or by a gallery not wanting my work, not realizing that it’s just the luck of the draw. You win some, you lose some. So I would let that stop me, which is a shame. Now when I get a rejection I don’t pay any attention to it. I just move onto the next thing. I also am more strategic about where I want to exhibit or show…and not just assuming that they’re going to take care of this for me.” 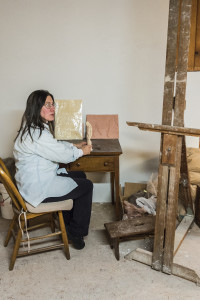 This significant change in her approach to art has not gone unnoticed by those close to her. Tony Staroska, co-owner of Juddville Clay Studio Gallery, points out that for the first several years of his friendship with Dendler (he met her about 10 years ago), he didn’t see any of her artwork.

Today, he has not only seen her sculpture and those long-hidden sketches, he has also witnessed her evolution firsthand.

“She’s a figurative sculptor but she’s trying to push her own little twist on things,” Staroska said. “Some people can’t get away from their classical training…but she’s a fine artist and a really nice person. It’s nice to see her come out of her shell.”