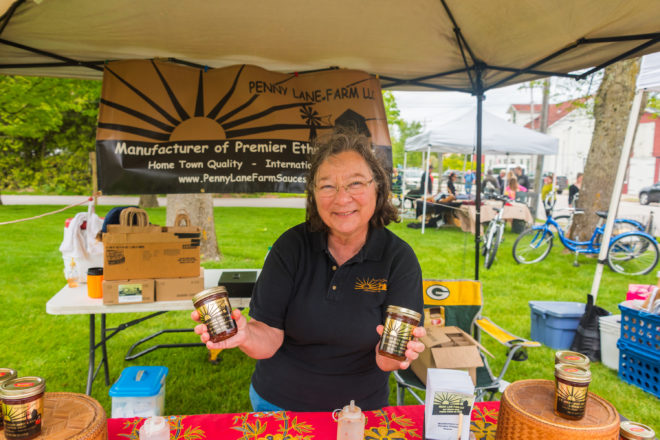 The nature of their work demands archaeologists always be searching for something. Sometimes they’re successful, sometimes not. And sometimes a project yields a reward that’s totally unanticipated.

In the late ’70s, as part of his dissertation research for a PhD in archaeology from the University of Pennsylvania, Jim Penny spent two years in northeast Thailand looking for artifacts related to agriculture and metallurgy. He was hoping to link the culture in that area to an older culture in an area near the border with Burma where Dr. Chester Gorman, the first archaeologist back in Thailand after the end of the Vietnam War, had found seeds dating to 9,000 BC and bronze and iron artifacts from 1,300 BC.

Jim’s wife, JoAnne, who later completed a master’s degree in the same field, went along as an assistant. Based in the village of Ban Chiang, considered the most important prehistoric settlement so far discovered in Southeast Asia, they worked in partnership with Thailand’s Fine Arts Department, helping to excavate three sites. They discovered many fascinating cave paintings but, sadly, not the links to Gorman’s work they had hoped for.

During their years in Thailand, the couple made friends with many of the Thai people who were assisting in their work. JoAnne, especially, fell in love with the local cuisine and learned to make many of the recipes, using herbs and spices not then available in the U.S.

When the couple returned to Philadelphia for Jim to complete his degree, JoAnne got a job in the test kitchens of Rodale Press, publishers of health and wellness lifestyle magazines and one of the largest independent book publishers in the U.S. She occasionally prepared meals, including Chinese and Thai, for the kitchen staff. On the day she cooked Thai food, one of her co-workers asked why she hadn’t included lemongrass soup, a traditional dish. JoAnne explained it was forbidden to bring lemongrass, even dried leaves, out of Thailand, and she hadn’t seen it in the U.S. “Why, we have it right here in our garden,” the fellow said. That was the beginning of JoAnne’s collection of spices to add to the ones she’d brought back with her. She was especially glad to find a source for kaffir lime leaves, a very fragrant plant used in soups and curries.

After 20 years away from Door County, where she grew up in a house built the year the Civil War ended, JoAnne and Jim returned in 1990 to her parents’ farm on German Road near Baileys Harbor. JoAnne’s mother thought Jim’s calm demeanor was just what was needed to help with her beekeeper’s business. JoAnne went to work at Scandia Village – not as a chef, as one might imagine – but in the office, where she retired as manager last summer.

For several years, she thought about something she might do after retirement, and in 2005 she began producing premier ethnic sauces to sell under the name Penny Lane Farm LLC. And thus, while the Pennys did not discover a link to those 11,000-year-old seeds in Thailand, the unanticipated “find” of their long-ago expedition was the seed of a brand new business. 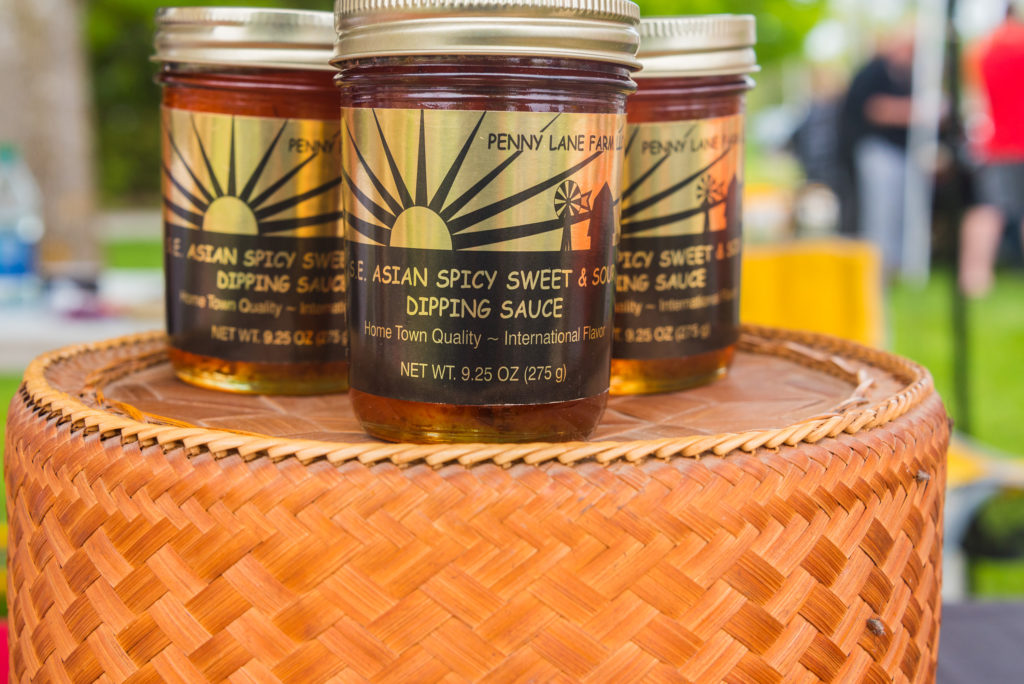 Today, JoAnne cans 800 to 900 jars a year of Cherry Ginger Sweet & Sour Dipping Sauce and Southeast Asian Spicy Sweet & Sour Dipping Sauce, a finalist in the 2008 Gallo Family Vineyards Gold Medal Awards that honor the highest caliber of artisanal food producers in the country. Another very popular item, Thai Peanut Sauce, is sold only fresh, by order, but can be frozen up to six months.

She says that both sauces are very versatile, great with meat, poultry, fish, stir-fries, egg rolls and pot stickers and as a dip for fresh pineapple and carrot sticks. JoAnne’s brother, Steve Mueller, owner of AC Tap, serves the Asian Spicy Sauce with egg rolls. He used so much that she finally taught him to make it himself, as the volume of his orders was taking too much of her time. Steve also uses the peanut sauce as a dressing for salads with grilled chicken.

A former product, Asian crisps, had to be dropped because they were too time consuming. “They were delicious,” JoAnne says, “but very labor intensive, and the machinery to speed up the process was expensive, so they had to go.”

As with all commercial kitchens, JoAnne’s has to meet exacting state and federal regulations, and her recipes have to be approved at both levels. Right now, she’s hoping to get the green light to start production of a spicy salad dressing.

Many Americans suppose that Thai food is too highly seasoned for their taste, but JoAnne says this can be controlled by using fewer peppers, as is the case with the cherry ginger sauce, or by serving the sauce dishes with rice. For example, two of the three recipes on her brochure (including one for burnt green beans) suggest serving them over hot jasmine rice. 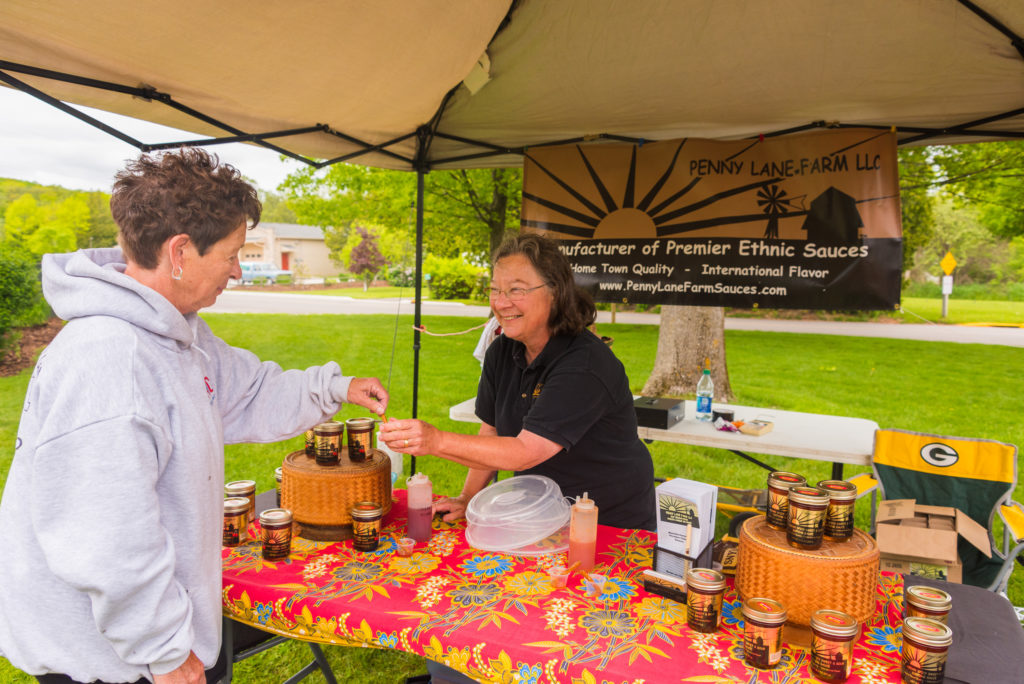 Most of JoAnne’s sales are wholesale. In Door County, the sauces are available at Main Street Market and Lautenbach’s Orchard Country Winery. Fred & Fuzzy’s uses them and, of course, at AC Tap, Steve frequently cooks up a batch. JoAnn also takes her products to farmers’ markets in Sister Bay on Saturdays and Baileys Harbor on Sundays. She encourages sampling. “It’s exciting,” she says, “to see people taste new things and find they like them.” The other item Penny Lane Farm produces is honey from Jim’s bees.

The business name relates to the couple’s last name, obviously, and also to a street in Liverpool for which the Beatles named a popular 1968 tune. Jim’s Penny ancestors came from England so, as archaeologists do, he and JoAnne did a bit of digging and discovered that Penny Lane was named for Joseph Penny, a slave trader. No further research is planned.