“School’s out, school’s out, teachers let the monkeys out!” How well I remember this old-time saying. We’d shout it in unison as we happily made our way home after the last day of grade school. Surely as usual, one of our short-cut routes home took us past one of our favorite trees in Kewaunee, a towering Horse Chestnut tree growing on the north lawn of the “Ham” Massey home directly west of the Congregational Church. 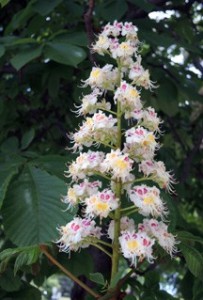 Very likely that monumental tree was also in flower at that time. Undoubtedly the creamy-white foot-long clusters of flowers, like pyramidal candelabras, prompted many Europeans and Americans to plant these trees. Supposedly Paris has more Horse Chestnuts growing there than any other city. Few large street and lawn trees can surpass the incredible beauty during flowering time of these handsome specimen trees.

So majestic and inspiring was this grand tree species in the eyes of Frank Oldenburg, a Baileys Harbor contractor and builder during the 1920s-1930s, that he made a practice of planting one or more Horse Chestnuts on the lawns of the homes or other buildings he constructed. He also gave many small seedlings to area friends thereby accounting for the substantial number of these trees growing through past years in Baileys Harbor. I’m sure that with a little scouting a few of these original beautiful trees are still doing well.

Perhaps Frank was inspired by the large Horse Chestnut growing in the front yard of his own home along Hwy 57 in downtown Baileys Harbor, right next to the Yum Yum Tree shop. Back in early June of 1988 we members of the Wisconsin Big Tree Society measured that tree and were thrilled to learn that it was, at the time, Wisconsin’s new record Horse Chestnut. Measuring 4.5 feet up from the ground, that titan measured 147.75 inches (12.31 feet) in circumference and a towering 57 feet tall. Its average crown spread was 45.5 feet. Unfortunately a bad windstorm did that tree in a few years later and brought it to the ground.

Fortunately we received good news two years ago from Washington Island people living along Airport Road of a monstrous Horse Chestnut growing in their yard. Upon measuring that tree on Sept. 2, 2012, we were overjoyed to learn that it was 180 inches (15 ft.) in circumference, 54 feet tall and had a large average crown spread of 65.5 feet—a new state record! 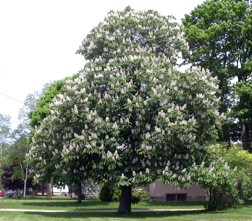 Few trees can match a Horse Chestnut tree when in full bloom.

I like to think that the May and June beauty of tall Horse Chestnut trees weighs more heavily with their owners than the mess of fallen leaves, hulls and nuts to be cleaned up at the end of the season. This thought of work that someone else would have to do never crossed our minds while growing up as kids in Kewaunee right next door to neighbors who owned two large Horse Chestnut trees. For no good reason we collected box upon box of the wonderfully smooth, deep mahogany colored nuts. Unfortunately we never learned of the very challenging and somewhat daring game called “conkers” that children of England have played for many years.

The raw nuts of the Horse Chestnut, an imported tree and actually not a true chestnut, are very dangerous to eat. They contain a bitter poison, esculin, and are only edible after the nuts have been shelled, peeled and mashed, and then leached in water for several days. The resulting pulp is said to be wholesome and nutritious. However, my advice is to let the nuts lie on the ground and let the little kids collect them!

The astrictive leaves of this tree are said to be palmate. Each leaf had from 7-9 wedge-shaped leaflets that are beautifully tapered and widest at the outer ends. An entire leaf (naturally including the 7-9 leaflets) may be between 4-15 inches wide depending upon where on the tree it is growing. Those growing on the inside of the large crown, in the shade, will be smallest.

With enough scouring in reference books one can come up with several interesting sources of the name Horse Chestnut. One has it that a mush was made from the nuts and formed into a poultice and placed on the lower legs of horses to heal wounds. Another idea has it that beneath each side bud on a twig is a large, rounded V-shaped leaf scar, from which a leaf has fallen, appearing somewhat like the hoof of a horse complete with seven prominent dark dots, the heads of the horseshoe nails.

When one admires the beautiful color and grain of chestnut wood, that wood is not from the Horse Chestnut, considered to be quite inferior, but rather from the American Chestnut. When Charlotte and I spent some choice time in the Great Smokey Mountains, camping, exploring and visiting the famous reconstructed Cades Cove Village, we marveled at the entire houses and barns, household furniture and appliances made entirely from American Chestnut wood. 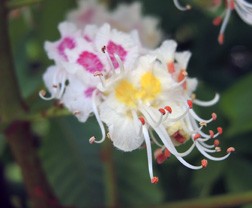 An individual blossom is quite intricate and colorful.

For about 300 years, roughly between 1600-1900, most barns and houses east of the Mississippi River were made of American Chestnut wood because of its great abundance and durability. Within 40 years after the accidental introduction of the dreaded chestnut blight into North America on Chinese Chestnut trees (Castanea mollissima) in 1904, the estimated four billion American Chestnut trees were dead! This was considered the greatest forest disaster in the entire world. Craftsmen today must be satisfied with reclaimed American Chestnut lumber and planks, obtained at considerable cost. However, the Chinese Chestnut tree is immune to the chestnut blight so today there is increasing interest in planting these trees in North America for the wood and the nuts.

I’ve been fascinated with big trees for many years and continue my interest in locating and measuring (and hugging!) them. One of my favorite books is Ancient Trees, Trees That Live for a Thousand Years. This is an “armchair” book with which I do plenty of traveling, for example to southern Europe, western Asia, and North Africa to see the huge Sweet Chestnut trees (Castanea sativa). How exciting it would be to travel to Sicily to see the “Tree of One Hundred Horses,” now only a fraction of its original immense size, but still maintaining a massive canopy, dating back to the late 1700s.

I think back to reading as a grade schooler and enjoying the poem [“The Village Blacksmith”]: “Under a spreading chestnut tree the village smithy stands…” written by Henry Wadsworth Longfellow, and also to sitting on the single heavy plank front step of John Poser’s blacksmith shop right around the corner from my dad’s barbershop in Kewaunee and watching John shoe draft horses. Then it’s back to our neighbors, Lou and Louise Flaherty and their large Horse Chestnut trees. My childhood memories are so precious!