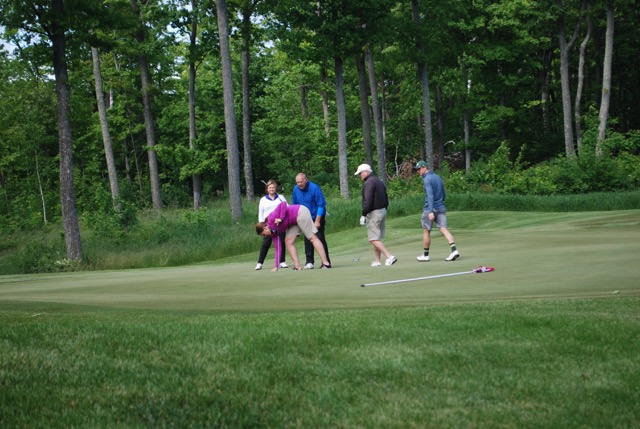 Golfers at the Boys and Girls Club golf outing June 7, 2016. Photos by Richard Board.

“There is nothing more rewarding than what the Boys and Girls Club is doing for our kids across the country,” he said.

The Boys and Girls Club of Door County held their annual celebrity golf outing at Horseshoe Bay Golf Club in Egg Harbor on June 7. The 18-hole world-class golf course has hosted this event each year since its inception.

The all-day event featured opportunities for both golfers and non-golfers to enjoy their day while supporting the Boys and Girls Club. Following a lunch, those who did not golf had the opportunity to ride on one of two Door County Trolley tours while stopping to visit The English Inn and other local wineries and locations.

Packers President Mark Murphy expressed his appreciation for the Boys and Girls Club and his fondness for Door County.

“My wife and I have a place up here. We have very positive feelings about Door County. It’s a very special place,” Murphy said. “Now as a Packers organization, we’re a community-owned team so for us, supporting the community is high priority. I have been very impressed with the work that they’ve done with the Boys and Girls Club.”

Joel Przybilla, a 13-year veteran of the NBA, spent his afternoon on the trolley with local residents. The 7’1” former basketball center values what the organization does for the community.

“I became involved in this for my sixth year now. Willie Schartner had asked me to come on board and support the community with the Boys and Girls Club,” Przybilla said. “What they’ve done and how they’ve helped kids in the community has been great.”

Former Green Bay Packer and Super Bowl champion Mark Tauscher readied himself for an afternoon of golf while reflecting on what the Boys and Girls Club means to him. 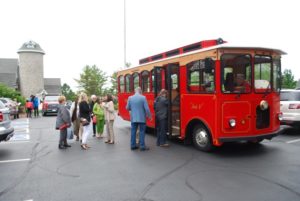 Golfers and nongolfers board a trolley during the Boys and Girls Club of Door County’s annual golf outing June 7, 2016. Photos by Richard Board.

“I just think any time you can do something that gives kids a good outlet to do positive things and obviously the Boys and Girls Club has been doing that for several years, you need to use those opportunities,” Tauscher said. “They’re providing a great service to the community.”

Harry Sydney, who earned Super Bowl rings with the San Francisco 49ers in 1988 and ’89 as a running back during his six-year NFL playing career along with an additional ring in 1997 as running backs coach for the Green Bay Packers following a year playing for the team, has devoted much of his life to giving back to the community.

Sydney, who is a regular attendee of this event, came from a childhood filled with abuse, alcoholism and divorce. Along with his success in the game of football, he has made it his mission to mentor men, young and old, through his foundation, My Brother’s Keeper, Inc., out of Green Bay since 2003. His foundation tells of how Sydney “mentors each individual, helping them gain the knowledge and skills to make positive changes in their lives.”

Sydney offered his insight on what his organization aims to do to help the community through an analogy.

“Most boys and men live by the duck philosophy. When you see a duck swim, what do you see? A pretty creature floating on the water. But what’s he doing underneath the water? He’s paddling his butt off. That’s like most guys. We look calm on the outside but have all this stuff going on,” Sydney said.

The event, which hosted more than 100 golfers, included four “hole-in-one” contests with a buffet dinner, awards ceremony, a live auction, and celebrity panel discussion that followed.

The Boys and Girls Club of Door County had a goal to raise money to continue to provide “safe and nurturing places throughout Door County where all youth feel welcome to explore and develop their full potential.”

Julie Davis, chief executive officer of the organization, stressed the importance of events like this and the need to receive support from the community.

“We started this organization with between seven to 15 children in the beginning and it has grown to 228 kids now with an average of 180 to 190 regularly attending,” Davis said.

Due to no longer receiving federal or state funding, this golf outing is a key event that helps raise a significant amount of funding needed for the club. Funding goes to programming, food and supplies and allows the organization to only charge a minimal fee of $10 per school year for children to attend. The club also hosts students throughout the summer.

Davis went on to mention that even though this event raises much-needed funds, the organization looks for continued support throughout the year. Donations can be made on the organization’s website at bgcdoorcounty.org or mailed to their location at: Boys and Girls Club of Door County, PO Box 579, Sturgeon Bay, WI 54235.