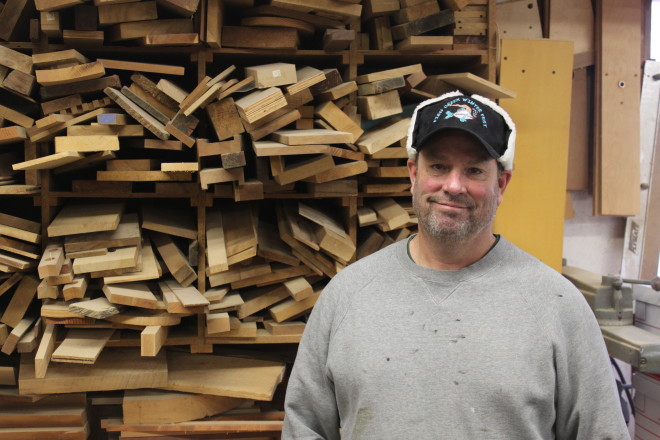 It’s about 48 hours before Winter Festival kicks off in Fish Creek and organizer Bob Spielman is wondering how to get the Happy Schnapps Combo van to the stage amidst the beer-drinking bowlers in the main tent.

“That’s still kind of a mindblower to me,” said Spielman from his woodworking shop in Fish Creek. “Then a little later in the day I have to get the fireworks truck in there.”

The Fish Creek Winter Festival kicks off on Friday, Feb. 5, with the main events on Saturday. Admitting the festival relies more on its quirks than on its spectacles, Spielman has watched the weekend evolve over 29 years. 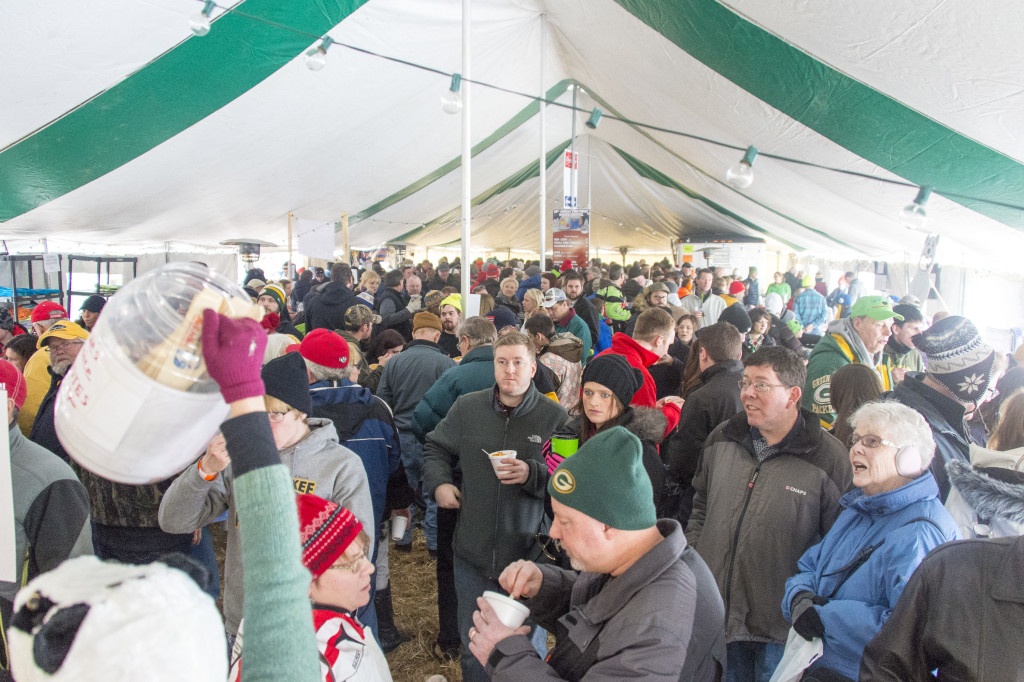 Inside the Winter Fest tent. Photo by Len Villano.

“We used to put the tent up on the ice just off Fish Creek beach,” he remembered. “Not only would we put the tent out there, all of the games and everything were also out there. We actually plowed a parking lot for people to park out there and they accessed the parking lot from the boat ramp so there were hundreds and hundreds of cars out there.”

Those were the early days when ice was more reliable and the Fish Creek Civic Association was looking for ways to fundraise for their year-round events.

“The Fish Creek Civic Association used to be funded solely by itself,” said Spielman. “Ron Merkel came up with the idea that if we do this in the winter time, when all of us have more time, that we could fund our entire organization for the whole year off of this one event and that’s why they did it.” 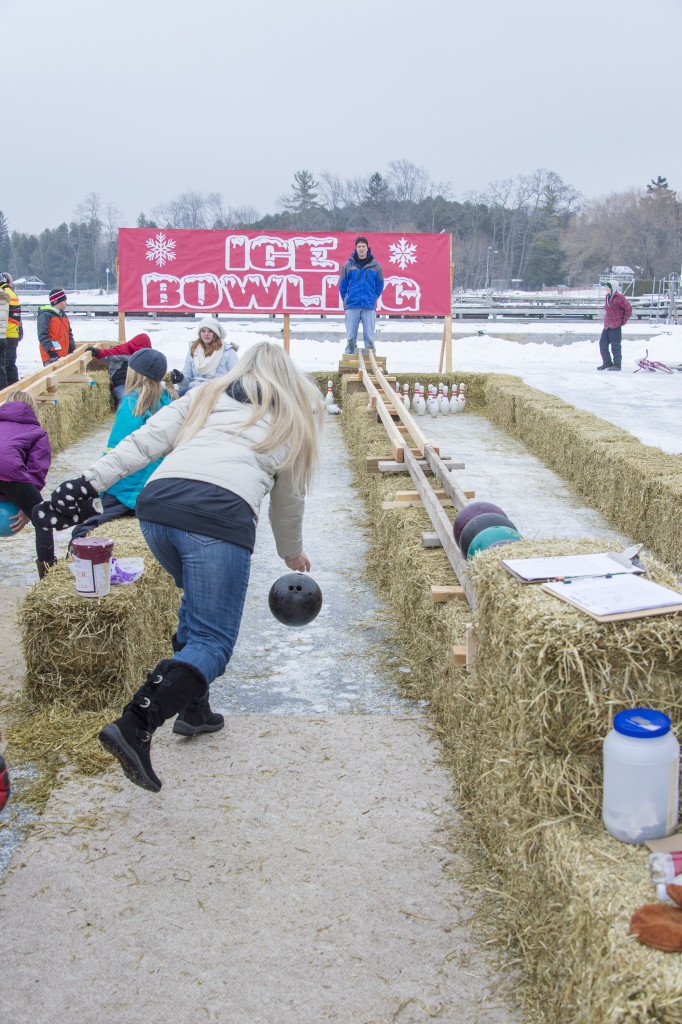 “We developed all of these games and we manned them all,” said Spielman. “As time went on and we found that we didn’t really need it to make money, it got harder and harder to find volunteers.”

In the late 1990s, what was formerly known as Winter Games became Winter Festival when the association tried expanding the event throughout town. Local businesses would each host one of the games, as far away as the Cherry Pit Spit at Lautenbach’s Orchard Country Winery.

“The whole idea was to get people moving around town,” said Spielman. “Huge complaints from people who attended because they liked to go down to the tent at one location have all of that stuff there, have their beer, have their brat, play their little games, most of them hung around all day long.”

Two years after residents and visitors sounded off on the town-wide festival, the association brought it back under one canvas roof. It was right around this time that Spielman really got involved.

“I’m not exactly sure how it came to be me, but it did,” he laughed. “Maybe I just took control or something, I don’t even know. I sort of became the Winter Fest Guy.”

But volunteerism was still an issue and the group needed a way to bring people in not just for the party, but to help with the event itself. 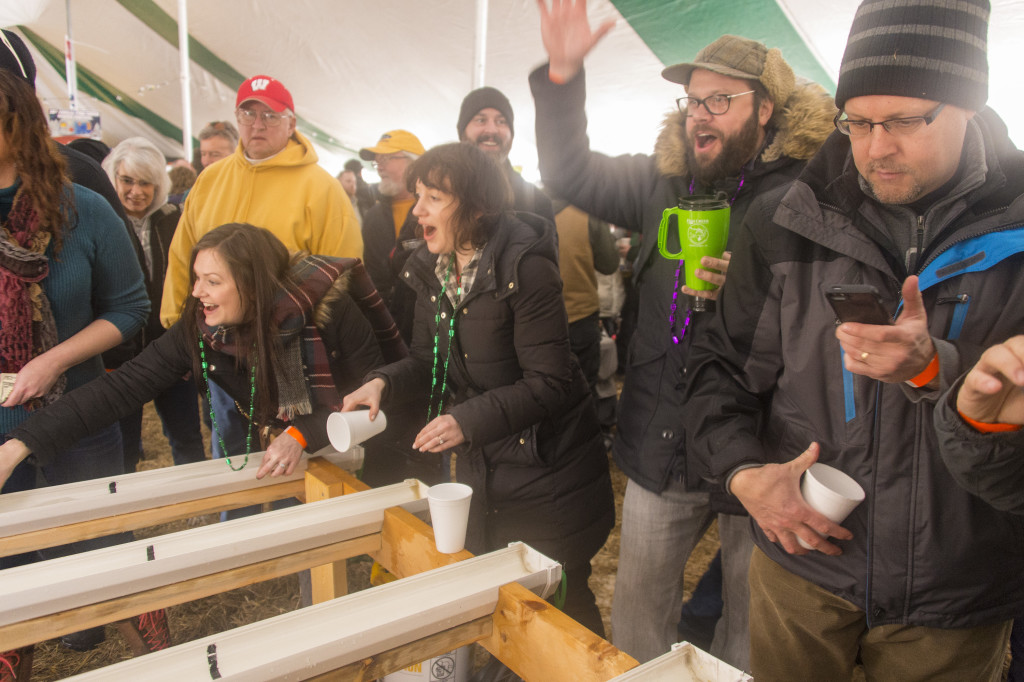 Minnow races inside the tent at Winter Fest. Photo by Len Villano.

“I came up with the idea of offering these different game stations to local nonprofit organizations like the YMCA, the Children’s Center, the booster clubs, the snowmobile club. Gibraltar Historical Association, those are a few,” said Spielman. Since the Civic Association didn’t really need the money, the deal was that nonprofits could be in charge of a game and keep the money they made.

Still, attracting the nonprofits was a slow process and only when the Sevastopol Booster Club came on did things pick up.

“I think they started out with bowling,” said Spielman. “They have evolved to golf, the hockey shot, the wheel of meat. They come up with all of that, they have their own stuff, their own volunteers.”

With nonprofits managing most of the games, the Civic Association can turn to a broader goal of attracting people to visit Fish Creek.

“The emphasis isn’t really as much on funding the organization as it is bringing people into town so they can filter into our businesses. If you get their head in the bed, they’ll eat breakfast and lunch and hopefully dinner and have their drinks here and shop here. Then we provide other activities. That’s the basic function of our organization.”

Even though many business owners who are members of the Fish Creek Civic Association close their doors for the winter, they still support the festival and what it does for Fish Creek. It attracts a different kind of visitor to see the county in a different way, away from big boats and busy streets. 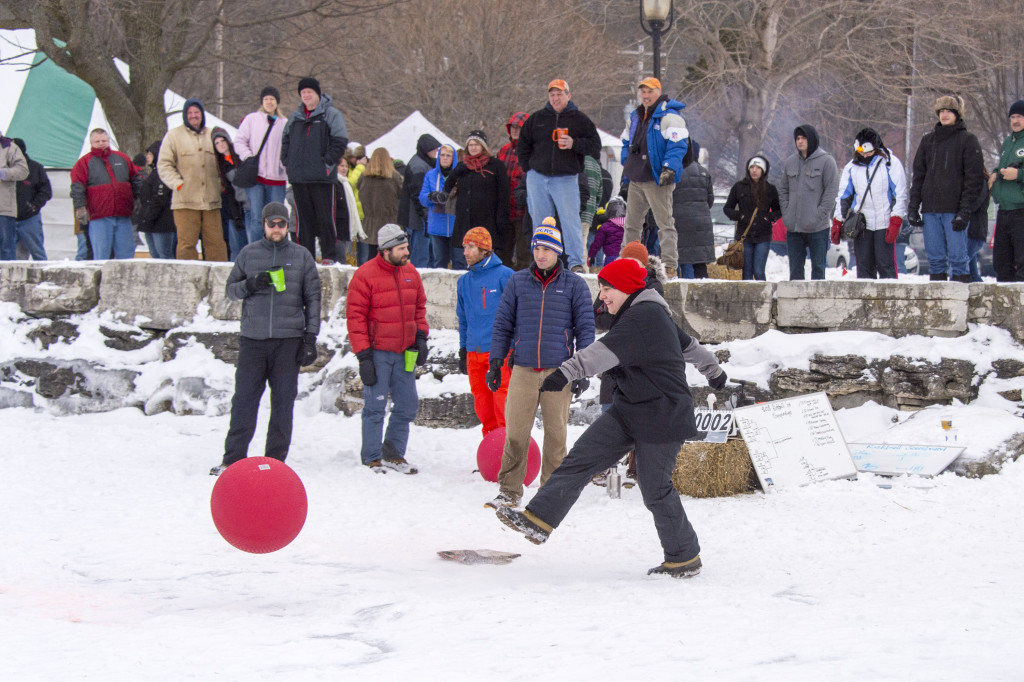 But Spielman is also happy with the amount of locals he sees under the tent during the weekend.

“I would bet that probably 60 to 70 percent of the people who attend this are from Door County,” said Spielman. “Financially is it worth all the effort? Strictly from the advertising side, probably not. But that isn’t the whole reason. It’s just fun.”

So the Wednesday before the big weekend, Spielman heads down the hill from his workshop to check in on the nonprofits. He looks at how many teams are signed up for the kickball tournament. He will grab a couple hours of “not very good” sleep and then the tent shows up at Clark Park. Then it’s the beer. Then it’s the people. Some are from out of town but most are from right here in Door County, ready to celebrate nothing but a weekend between friends and some of the strangest games that the wacky minds of Fish Creek envisioned 30 years ago.