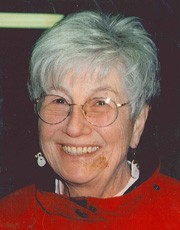 There were no parades or celebrations when June Witalison became the first woman elected to the Egg Harbor Village Board.

“It was pretty matter of fact,” said Richard Dannhausen, who served as village president from 1975 to 1985. He believes she joined the board in the early 1980s.

“We were just happy to have someone run in the village of a couple hundred,” Dannhausen said. “As a board member, she was very thoughtful and we valued her opinions.”

June Emily Witalison, 88, died April 30, 2015, in Sister Bay. Born to Erwin and Dora Paff Bastian on June 24, 1926, in Barton, Wisconsin, she was a graduate of Gibraltar High School, Door-Kewaunee Normal School and the University of Wisconsin-Whitewater. She married Arthur G. Witalison in 1948, and their love story lasted 65 years, until Arthur’s death in 2013.

June taught in rural schools in Door, Columbia and Dane counties. Her advanced education prepared her to assist children with special needs, and she headed the special education department at Cottage Grove in the Monona Grove District, where she was a strong advocate for integrating special needs students into the public school environment. She concluded her teaching career in Gibraltar area schools.

In the mid-1970s, June and Art returned to Door County, where they owned Witalison’s Market in Egg Harbor. After selling the store, they retired to their dream home on the farm in Juddville that has been in the Witalison family since 1898. June enjoyed her retirement at home and traveling with Art around the state and country.

June will be remembered as a loving and caring wife, mother and grandmother and as a true friend by the many who admired and respected her. Her warmth, kindness and patience in dealing with those less fortunate serve as hallmarks for her life. She had a great singing voice, and her smile could light up a room. She is deeply missed by her family.

In addition to her husband and parents, June was predeceased by: stepmothers Myrtle Grasse Bastian and Irene Hammersmith Bastian; brothers William, Robert and Henry; son James; and grandson Erik. She is survived by: her children, John (Linda, deceased), Paul (Kari) and Sara (John) Skamser; grandchildren, Skyler and Erin; and a great-granddaughter, Ella.

The family thanks all the caregivers who treated June with gentleness, kindness, and respect as she succumbed to the ravages of a long battle with Alzheimer’s. A graveside memorial service at Blossomburg Cemetery will be held at a later date. In lieu of flowers, the family suggests donations in June’s name to the Sister Bay Moravian Church.