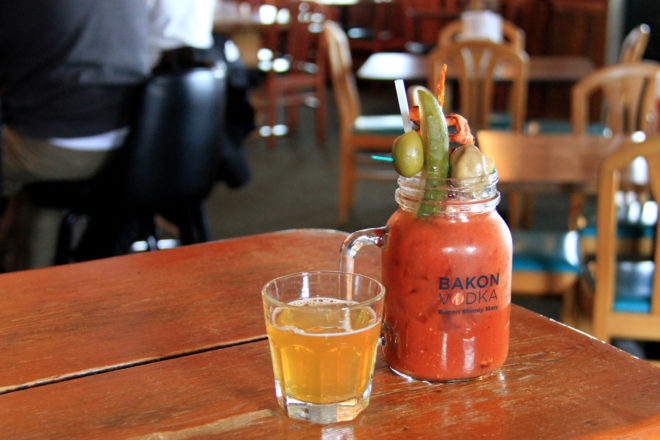 A hangover cure and brunch staple, the bloody mary is perhaps the king — or queen? — of morning cocktails.

It’s also one of the only classic cocktails whose composition can vary so widely. Ask for a bloody mary at five establishments, and you’re likely to get five different concoctions.

From there, the variations become increasingly creative and disputed. Common additions include horseradish sauce, olive or pickle juice, hot sauce, barbecue or steak sauce, and a number of spices.

The added garnishes are even more eccentric: meat sticks, olives, cheese cubes or curds, celery stalks and pickled vegetables — and don’t forget the chaser, also known as the “snit,” which is common only in the Midwest.

Husby’s Food & Spirits serves a delicious, classic bloody mary that’s never more popular than on Fall Fest weekend in October, when they serve several thousand over three days. The rest of the year, the drinks come with your choice of beer chaser. Spotted Cow is a favorite, but you can choose from the 17 seasonally rotating taps.

The Peninsula Pub lists seven versions of bloody marys, but this one is the most popular: a bacon-infused vodka with a freshly cooked slice of bacon.

At Hatch Distillery, the bloody is as local as it gets. Hatch uses its own own vodka and a Jamaican spice blend from The Jamaican Door, then adds an egg to wink at its Egg Harbor location. Bonus points for replacing the plastic straw with a straw-sized noodle.

Kitty O’Reilly’s Irish Pub uses a float of Guinness to top off its bloody, then piles it high with a tangle of Renard’s cheese whips and adds a full pick of garnishes, pickle spear, asparagus stalk, meat stick and lemon slice.