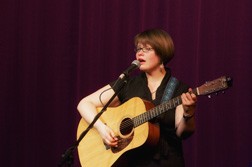 Wisconsin singer-songwriter Dahl has performed her original songs everywhere from the dusty cliff country of Mali, West Africa, to the winding canals of southern France, to the cedar forests of the American northwoods.

The depth and power of Dahl’s alto voice, the literate candor of her original songs, and the easy humor of her live performances have earned her the chance to share stages with some of America’s most respected songwriters, including Julie Gold and Dar Williams. In 2010, she was named Big Top Chautauqua Songwriter of the Year. 2012 has seen not only the release of Dahl’s second studio album, Leaky Boats and Paper Birds, but also the world premiere production of her original musical Victory Farm.

Doors open at 6 pm with snacks and drinks; feel free to bring a favorite wine or beer. Dahl will perform 7 – 9:30 pm with a break in the middle. Reservations suggested. For reservations or more information, call 920.495.2928. Lost Moth Gallery is located at 7975 Highway 42, Egg Harbor.