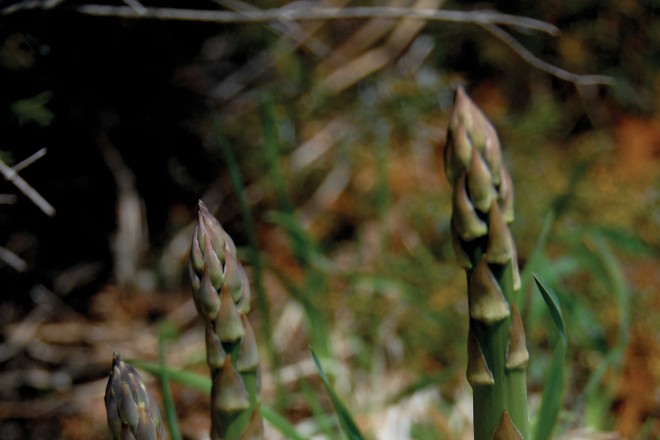 Popping out of the pages of Paul and Marilyn Mahlberg’s fantastic little book, Wildflowers of Door County, are Marilyn’s lively watercolor renderings of the peninsula’s treasure trove of plants. Enshrined on page 116 is the tasty little gem, Asparagus officinale! However, in Paul’s succinct description of the plant appears a word that raises an eyebrow – “introduced.” If the plant has been introduced by the human hand, how then can it be wild?

Third generation farmer, Jane Pluff, enjoys hunting the delicious stalks with her family as they walk fence lines. In the course of our conversation, she confirms the written words of professional forager Euell Gibbons that the seeds hidden inside asparagus’s red fruit are spread by birds. Thus, the paradox is answered – it is both “introduced” and “wild.”

Today’s wild asparagus appears to be unchanged from the plant native to the temperate regions of Europe, North Africa, and Asia. A member of the Liliaceae family, this crop has been cultivated as far back as the Egyptians, Greeks and Romans. Here in Door County, the plant is another remnant of what once dominated the Door County landscape – the small family farm. Along with peony patches, lilac hedgerows, and volunteer apple trees, asparagus was quite consciously introduced by the European farmers who battled the stony soil here in order to carve out their livelihoods as far back as the middle of the 19th century.

In fact, the county’s alkaline soil has proven to be beneficial to the establishment of patches of asparagus. Wild asparagus has been reseeded by bird droppings into disturbed areas of land that have then been left fallow long enough for the plant to establish its rootstock sufficiently to support perennial crops of shoots. Hence, the best place to gather dinner is along stone fence lines and out on the edges of orchards.

Food so hard won should be celebrated! In the words of Jane Pluff, “Just go out, break it off and eat it raw. You’d be surprised how good it is.” Full of protein, carotene, and vitamin C the shoots are a joy to eat straight from the ground. The vegetable can also be rubbed with olive oil, seasoned with garlic, and then broasted or grilled. However, avoid the Department of the Army’s Guide to Edible Wild Plants recommendation to boil the shoots to a tasteless mush. Buy canned asparagus for that!

In the end, the semantic debate does nothing to diminish the joy of “reaping where I did not sow” as so eloquently described in Euell Gibbons book Stalking the Wild Asparagus. Hunting shoots is the perfect excuse to get to know a different side of Door County. Leave the shore behind and head into the interior. Just remember to treat the world the same way you wish to be treated in return and don’t be greedy. Cutting the entire patch will destroy the roots’ capacity to recharge in preparation for next year’s crop. Good stewardship is the watch-word for both harvester and land owner. And of course, whenever hunting anything – wall stone, whitetails, or wild asparagus – make sure to get permission first. Those shoots you found may be someone else’s treasured patch!