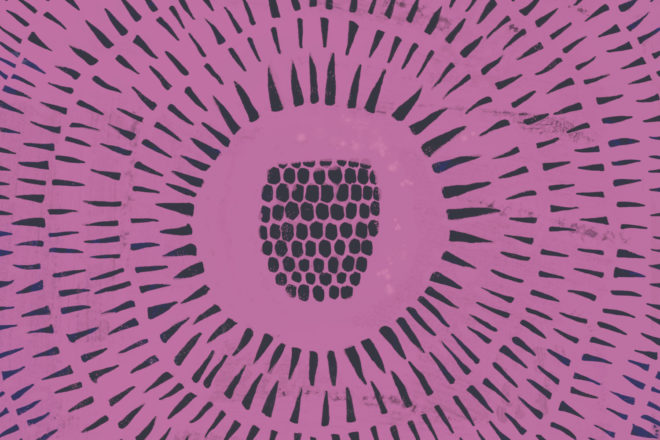 The Bible was mistaken. The apple isn’t the fruit of the knowledge of good and evil. Wasn’t the apple on a tree you could climb, wasn’t the apple on those drooping un-shy branches. The fruit of the knowledge of good, evil and thermal dynamics came on cane and thorns, so to get at the fruit, the knowledge, you had to wear a long sleeved shirt on a hot day. Good is like that. Evil is like that. Ribonucleic acid is like that. Knowledge isn’t something you can pick up from the ground or pluck from a bough. Instead you have to wade in, swim among the thorns, blood-sucking thorns. This is why the blackberries have thorns. Knowledge is like that.

Was at blackberry picking I saw my mom cross-dress, dress like a man wearing my dad’s Sunday white shirt, my dad’s pants. Her hair tied back with my dad’s fedora on her head. A kid shouldn’t have to see his mom dressed like a man, gives you a whole new perspective, but blackberry is the thorn of knowledge.

Blackberry summers are rare despite every spring blackberry spends the exorbitant boast, blossoms that promise excess, blossoms that June heat and July drought doth frustrate. To suspect knowledge is like that. Blackberries are like those ephemeral elements on the far end of the Periodic Chart that wink in and wink out of existence. The chance of summer blackberries comes in half-lives too, existence is measured in milliseconds.

Element 118, currently known as ununoctium, predicted by Niels Bohr in 1922, half-life is 0.87 milliseconds, give or take. The element was officially named in 2015 as Oganesson, after Yuri Oganessian, a Russian physicist born on the River Don in 1933, whose life’s passion is the synthesizing of new elements. Of course they could just call it blackberry and we’d all understand why.

The farmhouse gospel says the real art of any fruit is the kind of pie it makes. I was raised in the house of pie. My mama believed in three universals; the resurrection of the body also known as fertilizer, the kingdom of God and/or gravity, and my mama believed in pie. She believed all the wrongs of the Earth, whether of chores or drought or potato lifting or rotten economics were cured and vanquished…by pie.

Pie was her hope and her ministry. She believed supper could be of crude casual ingredients, shriveled cellar potatoes, milk gravy, served lukewarm and on the run, if there was pie to heal the breach. My mamma attempted pie from the broad expanse of the Periodic Chart. From rhubarb, a relatively easy trick, after all rhubarb is called pie plant. She did sweet potato pie, sweet corn pie, squash pie, carrot pie (the secret being maple syrup), onion pie (brown sugar and lemon juice is involved). She tried clover blossom pie. It needed more development. There was elderberry pie, new-potato pie. Pie of old chickens, feet and feathers included, pie of pine bark, elm tree, joe-pye weed. Acknowledged as cheating was to use whipped cream on pie. She cheated some on elderberry and mashed potato pie. She also cheated on grapefruit rind pie, orange rind pie, watermelon rind pie, whipped cream involved.

Being a farmhouse woman she could nip up a pie in that same half-life interval as element 118, served piping hot with the ice cream pail at her elbow in case that pie betrayed some margin. We consumed a lot of ice cream at her house.

Nevermind all this is a lie, because the best of blackberries isn’t pie but jam. Blackberry jam on a morning when the town road is submerged by a gale force blizzard, as doesn’t matter anyway since the car battery is dead. The furnace motor is out. As doesn’t matter either ‘cause the power is out too. For the moment everything is down to the wigwam existence, as is why a good country house has a propane stove, to compliment the wigwam décor. You can bake bread in a propane stove, do toast, do soup, bake cookies never mind the contents of the refrigerator have been transferred to the garage for the interim.

What turns this demise into halleluiah anyway was blackberry jam. Right there smack in the middle of woe, of Neanderthal winter, of civilizational collapse, of God on vacation, that moment in mid-winter when summer doesn’t seem possible is blackberry jam. All of rational existence, truth, beauty, honor recovered by a slice of toast, a touch of butter, and that gory smear of blackberry jam that everything will be OK, eventually.

When I was a kid, communion at the Buena Vista Liberty Corners kirk was of homemade white bread, whether by Mrs. Eckles or Mrs. Gilman, a generous piece each at communion. Sometimes the hint of garlic. I believed Mrs. Eckles used marijuana flowers as grew weedy around their septic tank. Was a good communion. Would have been more complete with blackberry jam, a little bit of blood, a bit of gore, now that’s resurrection.

My mama used to say you can’t pick blackberries without bleeding some. Knowledge is like that.