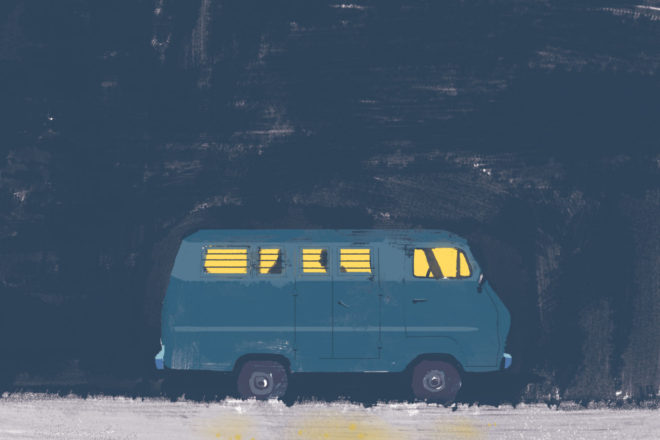 The Van. Illustration by Ryan Miller.

Tom and I were friends, the original fault for this was Vietnam. We were both elderly at the time of that war, the advanced age of 23 and 25, respectively. Both of us medics in the service of our much-mistaken Uncle Sam. Tom was in patient care, I a housekeeping medic, also sanitation, surgical cleanup, the crematorium. Fairly typical medic jobs.

Tom was an East Coast kid, educated in the sciences, history, anthropology. I was just another wandering-Jew English major who had wandered to the point of ordination. We were stationed together in a hospital setting, fighting our version of the Vietnam War. Both of us newly married, young, restless, culturally frustrated, we mutually hated this stupid war. Wrong cause, wrong reasons, probably even the wrong side is the problem of elderly draftees, seems we had given the war too much thought. We met in the medic’s locker room, he coming on shift as I left. Happenstance became friendship, friendship became brothers in attitude, hope, adventure, environment, sympathy.

Tom had an intrinsic love for nature; his dad was a researcher at Woods Hole, his mom, Dorothy, was Rachel Carson’s research librarian to whom Silent Spring is dedicated. My first reading of Sand County Almanac was a paperback edition Tom shared with me. Tom gave me my first Old Town canoe baptism in a classic cedar ribbed chariot of the Lord of Hosts. Together we canoed every font and trickle of water as giggled out of the North Woods, spring, summer, fall, even mid-winter searching out some spring-fed seep of open water, latterday voyageurs.

With his discharge Tom went on to create a reputation as a nature photographer, from magazine covers to greeting cards, even billboards. I returned to my family’s farm. In the year that followed we got together regularly, had kids together, family weekends, family trips, haunted museums, art shows, gun shows, two unarmed medics. On long winter weekends I’d go with Tom to his now-professional photographic excursions. Tom used a classic antique called a view camera. The apparatus about the size of a beach ball, where the lens image forms on a ground glass plate on the same plane as the film, an inverted image. When a shot is selected the lens is closed, the viewing screen removed, replaced with a large format film holder. The advantage of such a camera is the overwhelming color density, the superior focus, the degree of detail in the photograph. Handling a view camera was a three-ring circus, so much gear, the awkward tripod of teepee poles, a satchel of film holders, the hood, that oversize camera. Tom it seems was a purist, 35mm was too easy, too imprecise, besides SLRs lacked a certain exquisite zeal. That was Tom, that certain exquisite zeal.

I went along on his expeditions as his mule, the resident dumb animal, and in time came to understand and appreciate the camera’s separate grasp, separate conscience for nature. That crisp focused way of seeing, seeing what is so routinely ignored, seeing what is overlooked, seeing the details. The camera becomes a separate eye to the world, it looks differently at our humanity, our human place on this earth. That was Tom, searching out the divinity of nature, witnessed by the camera. Our conveyance was Tom’s Ford Econoline van, a plain bit of machinery, six cylinder, blue. The van was ostensibly made with the family excursion in mind but Tom outfitted his as an expedition vehicle, the benches converted to a bed, a fold-down table, cold box, for beer mostly, a library box, a two burner stove, candles, oh yah, and film, camera, tripod, gear. A tight fit. Seems I was the mule, and the cook.

Left on his own desserts Tom reverted to the intrinsic semi-savage, college dorm diet: junk food. Chips for breakfast, lunch and supper. Add a loaf of bread, maybe some jam. I was along on one particularly cold trip to the North Shore, a much favored landscape that in the depth of winter regained its primal elements. A silence so durable it could be weighed on a scale. Darkness you could chew. The cold too was pretty solid stuff. I told Tom I’d bring the food, to save me some space in the van. A touch aggrieved he asked, how much space? A bushel basket. His response was an expletive. Did he want my help or not? I got my storage.

That was a particularly cold winter, minus 50 one night. I pray seldom. Basically I don’t think it polite to ask, but I did pray that night. Not for our souls but the van’s battery. We had a neat campsite on the Baptism River, Shovel Point is nearby. Tom got some nice shots, ice on Lake Superior has a jewel-like quality, at four tons per carat, the very air seems more precious, to recall how the exposures get tricky at minus 20, minus 30 was another calculation. The nice thing about minus-30 is there was never another tourist in sight, or smell, or attitude. Tom’s photos became quite famous for their ability to capture the spell of wilderness untouched by man. Never mind the site was just 30 feet off Highway 61. Minus 30 can do that to a landscape.

In that Econoline I altered Tom’s sense of equilibrium, maybe of satisfaction, maybe of brotherhood. I took exception to his cold-blooded diet of chips and beer with the occasional frozen cheese stick. He wondered where I learned to cook, I replied I had a minor degree in farmhouse. He said, you mean your mom taught you to cook? No, I mean the square farmhouse on a dirt road taught me how to cook from raw ingredients. From the potato cellar, the smokehouse, the chicken yard, the flour bin. I told him of the rank order of food; there’s the Joy of Cooking by Irma Rombauer, there is Betty Crocker, and there is farmhouse cooking. Fried potatoes, thick-sliced bacon, thicker pork chops, fresh ham. At 30 below I baked little loaves of bread in a Dutch oven, the hamburgers the size of life-rafts. I don’t think Tom had been previously exposed to fresh horseradish, least not in abundance. And how on a cold, cold night horseradish lights a fine and cozy fire. The van with actual cooking accordingly became as warm as any recent meteorite crater, and the whole of that van slowly settled into a séance with the frozen north. We were soon down to our t-shirts in this Ford van igloo, to confess beer was involved. I taught Tom to play cards, Methodist cards, designed to eliminate any negotiable chance that might allow you to bet actual money on the outcome. Never mind, I don’t recall seeing much of that stuff during this epoch of our lives.

Tom died before Christmas of some winnowing disease. This he understood was Mother Nature doing her thing, less erosion as redistribution of the elements, with the same sense of fair play and confidence. He died knowing there is a natural divinity between friends at supper in a cold place.

One of the hard parts of life, is knowing how good it is.