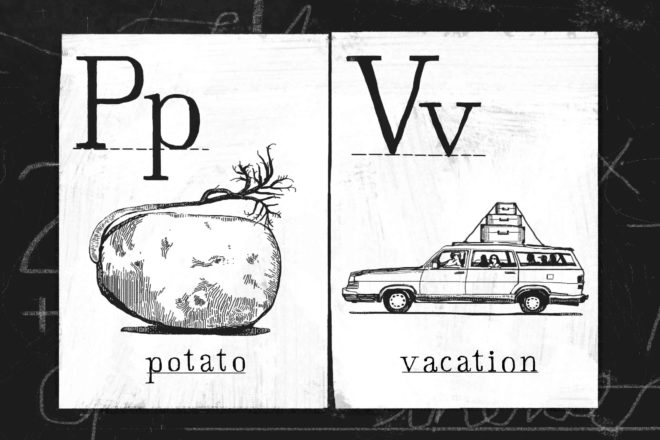 Autumn is to remember potato vacation. A time of one-room schools neatly scattered through the townships like jubilant watermelon patches. When kids walked to school, pumped the water and filled the reservoir, swept the outhouse, clapped the erasers before pledging the allegiance to the flag, and President Washington reigned over the alphabet strip. This, our invocation to education. The blackboard was actually black, if it did turn pale by the end of the day. An apprentice of education itself, that massive blackboard was our ever-vigilant mentor.

Potato vacation was not so much determined by the school board as by mischievous meteorology. If October was fair and corn still in milk, potato vacation could be delayed or skipped altogether because those potatoes could coast into winter storage without the need to interrupt the tantalizations of long division. To mention there were always some willing to be rescued from long division, if soon after potato vacation commenced they would regret that sentiment.

Once was that potatoes were lifted, this the proper and fully implemented emotional term, lifted – peck, bushel and hundredweight, potatoes were lifted. Not dug, not extracted, teeth are extracted, not harvested, potatoes are lifted, the active verb with implications on the backbone. The period of the potato vacation was the Jurassic age of agricultural equipage, a little past steam, if neatly into internal combustion but not quite to diesel. A good tractor went 40 horsepower, others were not so robust; the electric starter was available if a paltry six volts, by consequence tractors came with a crank on the proviso six volts wasn’t up to the task any winter morning, October was borderline when the frost warning was out. And the very moment to kick up the potato harvest by the alliance with all six school districts in the township. There was no kindergarten then, not as it would have made any difference, potato vacation was an equal opportunity despoiler.

Potato vacation was a cruel kind of deliverance to every kid who day-dreamed out the window of his/her release from school, potato vacation there to repair their mental reference. Seven days, maybe ten days’ worth of glorious potato vacation, glorious potato picking, glorious mental adjustment if mostly the back bone. No age was exempt, if you could walk, crawl or stumble, you were drafted to this communal task. Unless of course you were of Guth at Keene where it was apple vacation instead of the potato. Both were equal methods to redirect a kid’s mind to their advanced education, to the love of science, math and long division.

Potato vacation was for October to do, mid to late, the ground crisp and turgid in the morning. To arrive at the field as the digger, one row at a time lifted, shook, tumbled, deposited the bright summer potatoes on those stylish earth hummocks of fresh dirt. The task of course was to pick those now liberated potatoes. Most used boxes of popple wood because they were light and popple wood was not good for much else, the occidental measure the bushel. A measure now somewhat antique except the futures market of corn, soy and oats is still accounted in bushels, never mind they arrive in tonnes.

As with most penal sentences, potato vacation fades with time into something more pastel than it was. To admit it did define family and community in ways we perhaps ought not have forsaken. Potato vacation defined the farm in ways we’ve forgotten to be, that short duration boot camp the potato knows how to do.

Harold Altenburg the famed family farmer on Highway 54 has proposed to the Wisconsin Rapids school district a kind of potato vacation analogue for the benefit of modern education. A chance for high school age kids to get involved with agriculture, its methods, equipment, economics, sciences, all in an open-air classroom of the farm scene. The odd thing about this approach is institutionally we’ve had no problem at every grade level including college to bring academics to an open-air environment; Tree Haven, Boston School Forest (it was my one-room school that helped plant that forest), the Central Wisconsin Environmental Station at Sunset Lake. Education it seems has come to be a natural thing to do. Why not agriculture?

One of the great absences in modern American agriculture is the lack of communal participation. At the very root of the CAFO evolution is this absence of community/institutional involvement with the farm enterprise. How many family farms drift off because there is no succession, no next generation? Why does the average CAFO dairy have a Spanish dictionary ready at hand? Because American kids would rather work at McDonalds and Shopko instead of some stinking dairy. Because they haven’t been acclimatized to love cows. Some of the CAFO dialogue would go away if the CAFO was just another potato vacation experience for high school kids willing to try that alternate world of agriculture, and the whole farm business might end up being kinder and better for the environment, rather than allow farm practice to go hide in its own moral definition.

The modern farm scene is often thought as too dangerous for kids. To think so is football, the internet, the cell phone, and dare I say, too much leisure.

To confess I was saved from a modest criminal career by farm chores, I never once wondered what to do. It is my sense the American farm can be made to fit the disciplines of our educational system. Treating the ag-sector the like of an environmental lesson could serve both the education and the social and cultural dialogue. To establish for the future of the farm the distinguished presence of community and nature as part of agriculture.