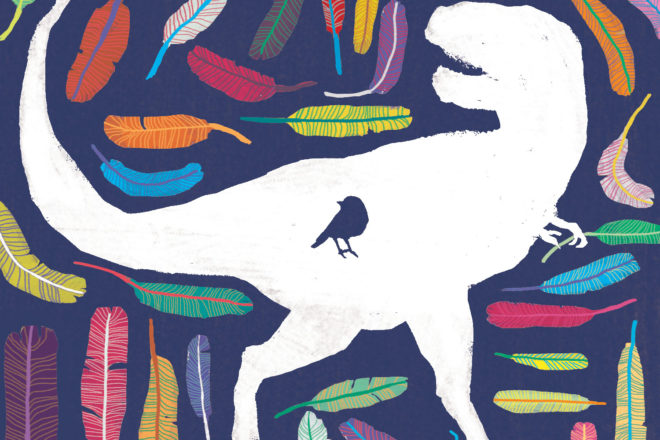 Most kids at some point in their transition to adult-form domestication go through a dinosaur stage. There is some appealing element about dinosaurs, big, noisy, different, that connects with kids. Dinosaurs perhaps signify a kind of defiance, and where they, despite being children, know more about something than their parents. Dinosaurs represent a distinctive intellectual achievement for kids.

All the more interesting as the science and knowledge of dinosaurs steadily adds to their complexity. When I was that child dinosaurs were rather drearily coiffeured, drearily attired, uniformly gray, big yes, ferocious yes, but not terribly zealous, not fashionable. Now it is thought dinosaurs were as vivid as birds. Iridescent, rosy crests, Ferrari paint-jobs, improbable colors, blue and aquamarine and purple, not to forget Day-Glo orange. It now seems such an obvious no-brainer that nature left to her own desserts doesn’t do ordinary. Paint, whether for war or romance, is one of the intimate strategies of life on Earth.

Dinosaurs have been in constant intellectual evolution, from dull to outright Lady Gaga flashy and to acknowledge that the dinosaurs didn’t really die out, if the Jurassic world did run head-on into an extinction event that warm afternoon off the beach of Acapulco. If the planet did cool, the fern trees die, the sea go silent, the life patent did survive, and some were the dinosaurs. The ones we call birds.

Previous to the Jurassic event of 60-some million years previous, feathered dinosaurs had been steadily evolving. A group of small dinosaurs sometime between 170 and 150 million years ago began, as the fossil record shows, the evolutionary transformation whose destiny was birds.

It is this long development of flight expressed in a broad array of feathered dinosaurs that has since intrigued science. When archaeopteryx was first discovered, the fossil clearly revealed this was a saurian with feathers, and automatically believed flight was involved. Yet the biomechanical aspects of archaeopteryx didn’t add up to flight, total flight surface was lacking, as was skeletal design and the muscle attachments for winged flight. Archaeopteryx may have pleasured in hopping, gliding flight like a kid with an oversize kite but it wasn’t see-you-later bird flight.

In recent decades thousands of additional small dinosaur fossils have been revealed, most from China’s Liaoning Province. These fossils tell a be-feathered version of the dinosaur story where even tyrannosaurs exhibited a downy cover of feathers, probably for insulation. Hundreds of dinosaur species were seemingly experimenting with adaptive pre-flight mechanisms; airfoil configurations, long feathered tails, feathered legs, long wings, short wings, smaller skeletons, with teeth, without teeth. Some of these pre-avian dinosaurs were small and already bird-like in size. Others were the size of modern horses and goats, willing to try, if a bit too large, to get off the ground. The fossil record seems to shout out the dream of flight across the vast expanse of the dinosaur realm those 150 million years. All of it driven by what set of chaotic evolutionary factors, science has yet to explain. Why do species evolve the way they do…chance? For reasons of threat, is it climate, or food? Chromosome damage? Or just genetic abstract expression? To think maybe the answer will be equally chaotic.

Feathers are believed to have started out as hair-like filaments, the hair for insulation to increase the home range and climatic adaptability. One-hundred-and-fifty million years ago the continents, in what is known as the Wilson cycle, were disengaging from the super continent of Pangaea; to which the continents will return some 500 million years later, that Wilson cycle. One-hundred-and-fifty million years ago Africa, South America, Australia, India, Antarctica, Greenland, Europe and Asia were still attached, if maybe you’d want a canoe handy. Or wings? In the long view planet Earth doesn’t have a steady thermostat, during the Paleocene Eocene Thermal Maximum the average terrestrial temperature was 73° F., currently it’s 60° F. Over a period of 50 million years, continents moved away from each other, ice came and went and crocodiles lived above the Arctic Circle. Throughout this period, against these broad climate cycles dinosaurs evolved, taking the hints for their genetic survival. Hairy dinosaurs went on to something else, as simple hair evolved into flatter structures with branches. Known as the pennaceous feather, quill-like, this as we know the modern bird and its feather.

The story of feathers, of flight, of birds, continues to be revealed as the fossil record steadily adds to the story of evolution on this quite malleable planet.

Perhaps it is only the kid who wonders why human beings had to follow a mammal ancestor rather than a feathered one. Perhaps something a touch smaller, lightweight, no need to brush your teeth, adapted to trees, the cliff edge, to eat your supper raw, and at the prospect of too many chores…just fly away.