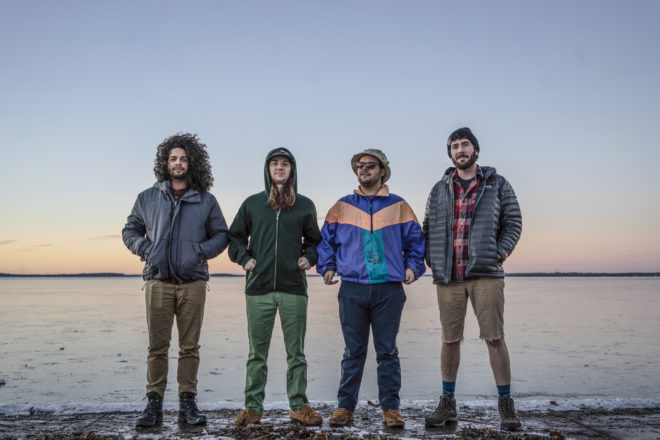 The Sól Grass Music Festival will debut this weekend on Washington Island, featuring a number of notable bluegrass bands, including Armchair Boogie. Vanessa McGowan talked with guitarist and vocalist Ben Majeska about the band and its upcoming performances.

Vanessa McGowan (VM): How did the band form?

Ben Majeska (BM): We all met in college while attending UW-Stevens Point (UW-SP). Augie Dougherty and Eli Frieders were playing in an alternative rock band, while I was busy playing electric guitar in a funk band. Our paths crossed at a few shows and parties, and when I found out Augie played the banjo, I immediately asked him to jam sometime since I’m a big bluegrass fan.

The band started as a bluegrass duo – just Augie and I – in 2014, but when our separate bands broke up, we added Eli on bass and their drummer, Dan Waterman, in 2015. When we started playing around the state and greater Midwest, we had a healthy split with our first drummer, who needed less time on the road.

We quickly replaced him with another talented drummer, whom we met at UW-SP: Denzel Connor. Denzel joined us full time around 2016 and is still slaying the drums for us.

VM: What is the origin of the band’s name?

BM: Turns out it is hard to name a band, so we planted the seed in a few creative friends’ minds that we were on the hunt for a band name. Our friend Jake Ponkratz happened to be up at his cabin shortly after and had an epiphany one morning.

He woke up with the sun coming through his window, shining directly on an armchair across the room that had an American Flag draped over it. He thought to himself, “This is an armchair boogie kind of morning,” and then the lightbulb went off.

He brought up the name to us, and although it was weird at first, these days I can’t imagine being called anything else. Band names eventually take on a life of their own once you get used to saying them.

VM: How would you describe the music that you typically create?

BM: We really pride ourselves on our ability to hop between all sorts of genres. It’s not a forced thing to have this kind of variety; it’s mainly to keep us entertained and fresh.

Many times, we have a kickin’ bluegrass sound because of the fast-paced acoustic guitar and banjo, but since we are backed by electric drums and bass, it really adds a lot of energy and the ability to take the music elsewhere. So, sometimes we like to get really funky with songs we write or improvise on. Other times we whip out an upright bass and go for an old-school country sound. Many times I use pedals on my acoustic guitar to make it sound electric, and from there we blast off into rock ’n’ roll territory.

But amongst all the high-energy sounds, we find plenty of time to tone things down and play some real heartfelt and beautiful stuff. The majority of this is original music, but we certainly dabble in some choice covers across the board.

VM: Who are some of your musical influences as a band?

BM: We love John Hartford, Willie Nelson, Jerry Reed, The Infamous Stringdusters, Leftover Salmon, Doc Watson, Little Feat, Led Zeppelin, etc. – all over the board, just like the music we like to create and cover. Shout-out to Eli, who is usually the band-van DJ and continually shows us new music that inspires us.

VM: Who is the primary songwriter?

BM: Augie and I write all of our originals. Our writing processes are very independent of one another. Many times I will write a song with just me and a guitar; then I’ll bring it to the band and let everyone figure out where they want to land in it. Same with when Augie brings songs to the table. So the structure and idea are generally there by the time we bring it to the band, but from there, we all write our own instrumental parts to it, and it always evolves into a song that is bigger and better than we initially imagined.

VM: If you could open a show or play for any artist, who would it be?

BM: I’ll go ahead and say Willie Nelson. Hard to imagine anything more legendary than that!

VM: What have you missed the most about the lack of gigs due to the pandemic?

BM: We missed so many things. Our time on the road brings us into contact with so many friends we’ve made over the years, and keeps us meeting new ones. Being on the road is an amazing experience, from the van rides to wherever we end up sleeping that night, and of course the performance.

For me, it is what makes me feel most alive, so I missed that filling up of my soul through playing out and touring around. We missed making people happy, seeing smiling faces in the crowd, sharing our music with the good people of the world. But now it seems we are mostly back in action, and the music feels better than ever before!

VM: What exciting projects does the band have on the horizon?

BM: We [hosted] our own festival called The Boogiedown on June 18 and 19 at Driftless Music Gardens in Yuba, Wisconsin. This [was] our inaugural year, and we couldn’t [have been] more excited. Right after that, we are rocking two nights at Sól Grass Music Festival on Washington Island on June 25 and 26.

Somewhere in there, we are releasing a western EP in the coming weeks that we recorded over the winter. It’s a fun, five-song EP where we keep a western-sounding theme to it.

Lastly, we were recently accepted as an Official Showcase Artist for the International Bluegrass Music Association Conference held in late September. It is a giant honor for us and a big milestone of our career so far. Things continue to look up, and we have countless reasons to keep on keepin’ on.

Check out Armchair Boogie at the Sól Grass Music Festival, June 25-26, on Washington Island. You can stream the group’s music anywhere and keep up with tour dates and other news at ArmchairBoogieMusic.com.