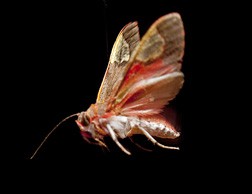 • Bats hunt at night using sonar to locate their next meal. The sonar is in the form of a series of clicks that increase in frequency as the bats close in on their prey. Researchers at Wake Forest University recently discovered a species of moth (Bertholdia trigona) that when threatened by a bat issues its own high-frequency clicks that can jam the bat’s sonar. The moth’s acoustic image becomes blurred – the frustrated bat knows the moth is out there but cannot find it. (Smithsonian, Oct. 1, 2013)

• The ability to taste involves a biological phenomenon called chemoreception. Patches of neurons on the tongue bind chemicals (e.g., salt, sugar, bitter) to allow us to perceive taste. In recent years scientists have discovered that the surfaces of many cells of our body, such as those of the gut, brain and kidneys, also have taste receptors. Although we know that body cells can communicate with one another by releasing chemicals, why so many of our cells have taste receptors is unclear.

Recent studies on mice may shed some light on the subject. Mice have two genes that are responsible for taste perception. When these genes were either missing or blocked, males produced distorted and tangled sperm. Sperm are known to possess receptors for bitter chemicals, and now it appears that such chemicals may be released by eggs, enabling sperm to bind to eggs and fertilize them. These studies illustrate that two genes are required to provide an animal with both a sense of taste and the ability to produce healthy sperm. (Scientific American, Oct. 2013)

• Several key studies have been carried out on the effect of pesticides on the developing brains of children. One study focused on migrant farm workers living near the farm fields of California, where chlorpyrifos (anorganophosphate pesticide) is heavily used. Hundreds of pregnant women were tested for exposure to the pesticide. Thereafter, the mental health of children born to these women was followed through adolescence. Early on, infants exposed to a pesticide environment showed abnormal reflexes. Later in development, highly exposed children had lower mental development, an increase in ADHD-like behaviors, and a lower IQ, compared with children not exposed to pesticides.

In slum housing in New York, chlorpyrifos is used extensively to control roach populations. Studies of children exposed in this environment show changes similar to those found in the California study. Brain scans of 40 of these children aged 5 to 11 showed changes in the volume of certain brain areas compared to normally developing brains.

It goes without saying that producers of pesticides harmful to people, such as Dow Chemical, go out of their way to find ways to refute studies showing deleterious effects of their products on humans. And the Environmental Protection Agency still permits marketing such pesticides. (Science, Aug. 16, 2013; Rauh et al, 2012, Proceedings of the National Acad. of Sciences, April 30)

• A recent study suggests that migraine sufferers are almost four times more likely to have a panic or anxiety disorder than people who do not have migraine headaches. One wonders whether treatment of an anxiety disorder might reduce the number of migraines. Another study found that a third of asthma sufferers are depressed. It is possible that treating their depression could make asthma attacks less severe? (Scientific American Mind, July/August, 2013)