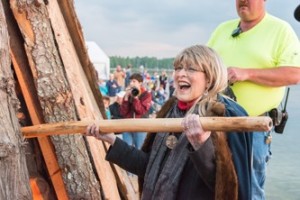 “Some are born in their place, some find it, some realize after long searching that the place they left is the one they have been searching for.” ~ Wallace Stegner

Sue Sherman seems to have found her place.

The people of Ephraim certainly think so, for at the annual summer solstice festival in the village on June 20, Sue became the 51st Fyr Bal Chieftain.

All residents, property owners, and EBC businesses are allowed one vote each. Voting runs for a month before the festival, ending at 3 pm on the day before Fyr Bal.

“In total, we probably had about 75 votes, with more than half of those going to Sue,” said Jason Szmanda, tourism administrator with the Ephraim Business Council. “This is especially impressive because the vote is on a write-in basis. The community really came together and decided it was Sue’s year. Personally, Sue is a positive, upbeat and charismatic woman, and we are lucky to have her as our Chieftain. She represents the best of Ephraim and Door County, and we are proud to recognize her many contributions to this community.” 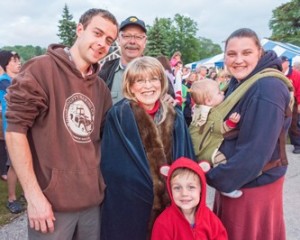 “I was very surprised, and it was a wonderful experience,” Sue said, “I’ve lived in this village for 20 years. It’s been my home and the people of Ephraim have been my family.”

The title of Chieftain is purely ceremonial. Sue’s only real duty with the title was to light the first bonfire of Fyr Bal 2015.

“As far as I know that’s where it ends,” she said. “Perhaps when next year’s chieftain is chosen, I may be the one to pass the cape and present them with a medallion. This beautiful medallion I received will be a wonderful memory. Russ Zabler of Zabler Design Jewelry here in Ephraim made this beautiful medallion. I’m just grateful to have it as my souvenir and my remembrance of this experience.”

Sue and her husband Steven have owned Village Green Lodge in Ephraim since 1996. TripAdvisor has awarded their lodge a Certificate of Excellence for consistently great reviews from guests from the service they receive and also for Sue’s great breakfasts. “A place of great serenity and relaxation,” starts one review. “Sue, her husband, and staff are such gracious hosts that I feel like part of their family,” says another.

“We’re happy to have people come and stay and see what a great village it is,” Sue said. “People work hard to make this village possible. We want to share that with people.”

Sue knows what it takes to make a village, having served for 10 years on the board of directors of the Ephraim Business Council and six years on the village board.

“It was a matter of trying to be open and hear both sides of every issue,” she said. “That’s how I always did things. It really worked well. People were happy with me on the board. It was my decision to step down. I became a full-time caretaker for my mother and father. I did that for five years. In addition to owning the Village Green Lodge with my husband, I was being a caretaker and my plate was kind of full. It was hard to give it up. I really enjoyed my time on the board. It was a very positive experience. I was respected by people in town, and I was grateful for that. I always believe in treating people how you want to be treated.”

Being named Chieftain by fellow village residents is obvious testament to Sue’s belief in the Golden Rule.

“It was a great honor to be chosen by this wonderful village. I didn’t even imagine anything like that at this point,” Sue said. “I have been battling cancer for 2½ years, so I’ve had to step out of a lot of my active roles in the community. I’ve not been able to do things, so I didn’t expect that.”

Sue wasn’t feeling well 2½ years ago, so went for a full body scan in Green Bay, where a mass was discovered in one of her lungs. She was diagnosed with stage 3-lung cancer.

“It pretty quickly turned to stage 4 and showed up in her other lung,” said Sue’s son, Ryan Sherman. “There was a little spot in her brain as well. She went through all the chemo and radiation, and they got the brain cancer. That’s been gone ever since, but the spot in her lung has been persistent. She has been through a variety of treatment and chemotherapies. They’ve all helped a little, but the spot is still there and just lately has been giving her a hard time. Every step of the way, she’s been giving it her all.”

Ryan, who was 12 when his parents moved from Milwaukee to run the Village Green Lodge, now lives with his own family, wife Angela and young sons Mylo and Theo, in Gibraltar.

“It’s been an amazing ride,” he said. “I was with them when they bought the place and helped them run it through high school. It’s pretty impressive what they have done. Mostly it is her personality. That’s really what the guests looked for when they came, and so many customers come back year after year.”

He also mentioned how his mother helped put Ephraim on the culinary map by making many appearances on Fox 11’s Living With Amy.

It was for all these reasons that Ryan was happy and proud to see the village recognize his mother.

“I thought it was amazing,” he said. “She’s done so much for the community. It’s nice to have that recognition.”

In spite of the rough road she has traveled in her struggle with cancer, Sue has remained involved in the business, which goes hand-in-hand with the promotion of Ephraim and Door County.

“It has been a rough road. The cancer is advancing,” she said. “I am on a new treatment right now. I am still working and try to do as much as I can, but I am on oxygen a lot of the time because I don’t breathe well. I’m still trying to keep my business alive and spend time with my guests and be part of the community, but not in as active a role as I used to do. This new treatment was just approved in May and in trials it showed promise, so I have to latch onto that bit of hope.”