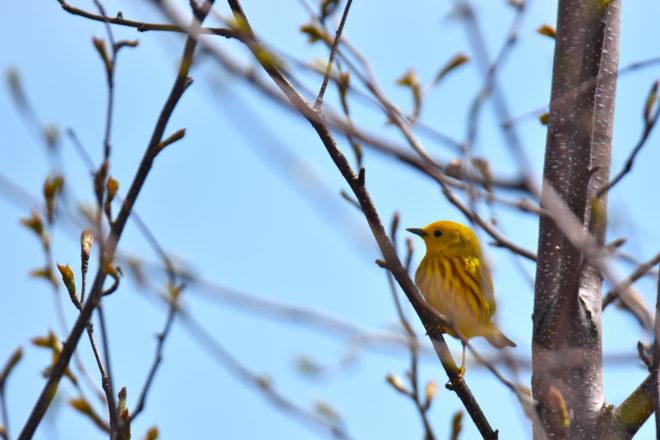 People with a passion are inspirational to me. Bird-watching enthusiasts are some of the most dyed-in-the-wool folks I have ever met. And a few of them, it seems, are downright crazy.

The event kicked off with a bird-banding demonstration led by Cindy Samples, a retired park ranger and environmental educator with the USFWS. Samples obtained her banding certification in the 1980s. Ranger Dustan Hoffman and biologist Sarah Warner, both with the USFWS, set up two mist nets on the Potato Dock on the nicest weather day of the festival.

Children from the K-4 classes of the Washington Island School observed Samples as she attached uniquely numbered bands to the legs of several yellow warblers, a Nashville warbler, a palm warbler, and a Lincoln sparrow. Friends of Plum and Pilot Islands member Amy Lesnjak recorded the band number along with the bird’s weight and other data, which will be submitted to the USGS Bird Banding Laboratory. This information helps to keep track of how resident and migratory bird populations are doing throughout the world.

On Friday afternoon, Washington Island resident Steve Waldron showed the way to a trail running through a mature forest on the island’s north side. Carl Schroeder of Kiel was one of the expert guides along with us. Schroeder often uses the calls of birds to help locate them by sight. He showed us a pine warbler, a black-and-white warbler and a pileated woodpecker sitting motionless in a hole near the top of a dead beech tree.

When Schroeder was nine years old, his grandmother gave him a Peterson Field Guide for birds. Together with his “Grandma Been,” they hiked through the Crex Meadows area of Burnett County, Wisconsin, soaking in the region’s wildflowers and birds.

“She was my birding partner for 10 years,” Schroeder said.

Never underestimate the power of a grandparent. Bird watching has become a lifetime passion for him: he’s traveled to 40 states and six countries, amassing a list of almost 1,200 species of birds.

On Saturday, the Yankee Clipper took the group on an early-morning excursion to Plum Island, which is part of the Green Bay National Wildlife Refuge. While on the water in the Death’s Door Passage, Melody Walsh spotted a flock of birds flying in a V formation.

My hearing isn’t what it used to be. I thought she said they were willets – a type of sandpiper.

When I asked her about them later, she said, “It’s whimbrels, not willets. Whimbrels are shorebirds with long, curved beaks. They are migrating through on their way to their breeding grounds in the Arctic.”

According to the Cornell Laboratory of Ornithology, I discovered that some whimbrels have been known to fly 2,500 miles nonstop!

While hiking near the fog-signal building on Plum Island, Joseph Mathers of Fitchburg, Wisconsin, identified the distinctive call of a sora. This small bird spends most of its life incognito in marshes and wetlands and often goes undetected by humans.

Mathers has always been interested in nature. A place he visited in Arizona got him hooked on bird watching.

“I got into birding in my 30s,” Mathers said. “I took a class and saw four different types of tanagers in a nature area in Arizona. It also had 10 nesting pairs of great horned owls in one linear mile.”

Saturday morning had been cool and windy, with intermittent showers. Most of the hikers were gathered around a propane heater in the Plum Island Boathouse waiting for the return of the Yankee Clipper when I walked inside.

Wendy Cooke was warming her hands by protected flames. I asked why she went on the trip to the island, given the cool and damp weather.

“I try not to pass up an opportunity to go to Plum Island,” she said. Cooke lives along the south shore of Washington Island. She can watch a variety of warblers land in a tree outside her bedroom window.

Later that evening, USFWS biologist Reena Bowman presented a program at the Trueblood Performing Arts Center titled “Saving the Piping Plover.” She explained the efforts being made to save these federally endangered shorebirds by creating habitat for them in lower Green Bay. The U.S. Army Corps of Engineers is using dredged materials from the Fox River to rebuild the Cat Island Chain, which has provided nesting areas for the plovers.

Only four diehards showed up to ride the Karfi for the bird outing on Rock Island at 7 am Sunday. Weather conditions were miserable, with driving rain and 30-mph winds roaring out of the northeast. Waves were crashing over the bow of the ferry as it entered the lake after leaving Jackson Harbor. Five hours later, the soaked, hard-core birders proudly proclaimed seeing 58 species on the 912-acre island.

I’m left wondering, what would cause someone to want to be out in the elements on such a lousy day? Maybe it’s the thrill of spotting one of the endless varieties of colorful feathered friends God has gifted to us. Perhaps it’s the camaraderie of being with others who share a common interest. Or it could be that some people are just real “bird brains” who don’t have enough common sense to know when it’s time to come in out of the rain.

Whatever the reason, I affectionately admire the devotion displayed by these lovers of the outdoors as they scan the woods and fields with their binoculars and cameras, hoping to find a whimbrel or a willet in all kinds of weather.