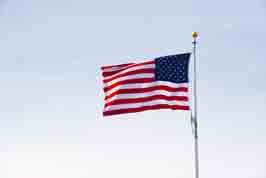 Jack McCoy donated a number of flags and flagpoles over the course of his life, and his daughter thought a fund to continue the tradition was a fitting way to remember her father. Photo By Len Villano.

Jack McCoy, veteran, sailor and longtime Egg Harbor resident, passed away in June. When his daughter Suzy Boerke found a folder of records Jack kept of American flags and flagpoles he had donated throughout his life, she knew how to keep her father’s memory alive.

“What a way to show off how you care, to fly a flag,” said Suzy. “All around the harbor, all around Egg Harbor, there were flags. That’s because of him.”

Suzy and her husband David set up the Jack McCoy Flag Fund in honor of Jack. They’re collecting money through the Egg Harbor Historical Society to continue donating flags and flagpoles to places in Egg Harbor.

But not just any flag or flagpole will do – they have to be large and grand like those Jack donated.

“He was very proud that they looked good and the flags were big enough,” David said.

In addition to flags around Egg Harbor, Jack donated a flagpole to the Ephraim Yacht Club in honor of his wife Ruth. Suzy plans to re-dedicate the flag in honor of both her parents.

Jack and Ruth were members of the club, and left a legacy there beyond the flagpole. Ruth was secretary for the yacht club for many years, and Jack – or Captain Jack – was once the commodore.

Jay Lott, current commodore of the Ephraim Yacht Club, remembers racing Jack many years ago, when Lott was a teenager. After races they would often stop for a burger at Wilson’s and talk, sailor to sailor.

“It was cool because he was treating us as his equals,” Lott said. “As equals socially, and as competitors, and so forth. That’s one of the things that made him a great guy and a good competitor.”

Beyond donating flags, Jack showed his love of Egg Harbor by getting to know his neighbors. He would write down the names of neighborhood children, so he would know everyone at the parades. And, Jack almost never left town.

“He’d never leave Egg Harbor, even in the winter,” David said. “We couldn’t get him to come to Milwaukee. He wouldn’t leave.”

“I got a great education from Jack, and it was always fun to talk to him,” Van Lieshout said.

And with more American flags flying throughout Egg Harbor, everyone in the village can get an education in patriotism from Jack.