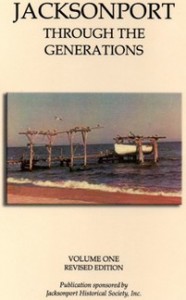 The original 1997 edition of Jacksonport Through the Generations:  Volume I, produced by Jim Halstead on his personal computer, has been newly released in an expanded version. When Halstead’s limited edition proved popular beyond expectations, the Jacksonport Historical Society reprinted it commercially in 2000 with black and white photos only.

This year’s new release, co-edited by Rebecca Halstead and Eileen J. Roberts, will feature a number of additional pictures, not only of families but also scenes of historical and architectural interest including churches, schoolhouses, docks, sawmills, farms, and stores. The Erskine, Kohls, Bagnall, Campbell, La Mere, Halstead, Martinson and Herlache families will be highlighted in the text.

Additional new pieces in the revised volume include Paula Virlee’s poem “Grandma’s Root Cellar” and an anonymous piece entitled “That Old Time Apron.” An epilogue by Becky Halstead, daughter of Jim Halstead, will introduce readers to the new edition.

The book may be purchased at the Jacksonport Craft Cottage or Bley’s Grocery in Jacksonport, or by visiting the Jacksonport Historical Society’s website at jacksonporthistoricalsociety.org. For more information call 920.743.6415.

The book price is $15, not including shipping and handling. Proceeds will go to the Jacksonport Historical Society’s museum fund.