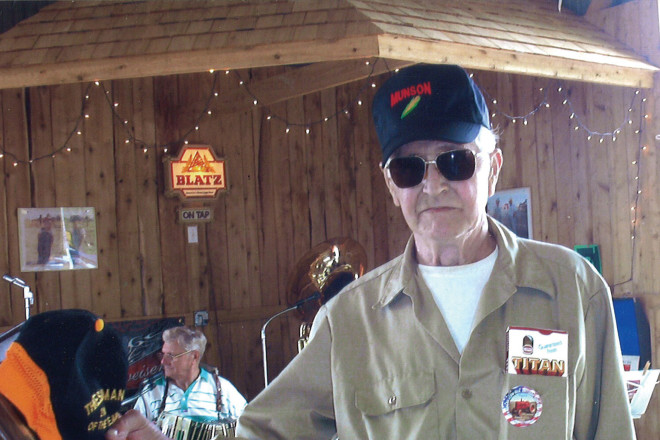 Farming has come a long way since Albert Carmody began operating a threshing machine with his brother-in-law, Bill Simonar, over a century ago.

Using a steamer to pull his Red River Special on the road, he traveled as far as Hainesville servicing farms with a machine that changed farm work for many. The thresher mechanized the process of separating grain from stalks and husks, a formerly laborious process done by hand. Carmody earned a reputation for doing a clean job of separating from the chaff.

His son John continued the family tradition as long as he could, perhaps longer than anyone else in the area, putting the old thresher to work until 1980.

For keeping tradition alive, Carmody was named the Thresherman of the Year at the 2009 Valmy Thresheree by the Northeastern Wisconsin Antique Power Association. “It was great to recognize him,” said Shirley Geisel, a charter member of the association. “And I think it was special for him.”

Albert used the steamer to power his threshing machine until 1931, when he bought a powerful Allis Chalmers tractor, the most powerful tractor in Door County into the 1960s. John still has it, stored away on the farm.

John learned every aspect of operating the machine at the foot of his father, who worked the farm into his 70s. John entered the service during the Korean War and, when he was finally discharged, he took over the farm and found a new way to use the old threshing machine.

He removed the blades from a chopper, allowing him to cut down the grain and blow it into a chopper wagon. Then he would reverse the procedure, blowing the grain into the threshing machine that was set up to blow the straw into the barn.

It wasn’t until Albert died in 1978 that John gave in and bought a combine, ending the long run of his father’s threshing machine.

John had kept it running until 1980, making him the last farmer in Egg Harbor, and possibly all of Door County, using the old machine. Only three years later, the Valmy Thresheree was staged for the first time to keep memories and knowledge of peninsula farming’s formative years alive, as the Carmodys had for nearly a century.