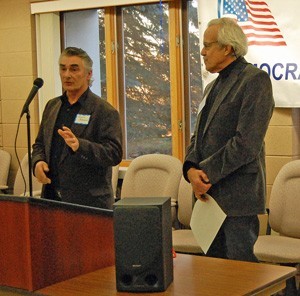 Kewaunee County farmer and retired ag teacher Arnie Johnsrud, left, made his announcement to run for the 1st District Assembly seat at the Dec. 7, 2013, Door Dems’ 8th annual Pie Party. At his side is Garrett Cohn, chair of the Democratic Party of Door County. Johnsrud made the announcement before seven-term Assemblyman Garey Bies announced his own retirement, and before fellow Democrat Joe Majeski announced his decision to run. Photo by Jim Lundstrom.

Kewaunee County farmer and retired ag teacher Arnie Johnsrud has decided to withdraw from the race for the 1st Assembly District in order to support the candidacy of fellow Democrat Joe Majeski.

“To my loyal friends, my faithful supporters, and to the many new friends I have had the pleasure to get to listen to, after thorough deliberation with family and friends I have decided to withdraw my candidacy for the Democratic nomination for First Assembly. I do however remain committed to advancing new leadership in the state Assembly. We are in need of a state representative who puts the people of our district before the politics of Madison and that is why I am supporting Joe Majeski’s candidacy for the state Assembly.

“Joe was born and raised in Kewaunee County and has made a life for him and his family in Door County. He has experience in leadership and for putting problem solving before politics, and I will do what I can to make sure he is our next state representative.”

“I have had the pleasure of meeting with Arnie during the last few weeks. It was clear we share the same values, work ethic and commitment to the citizens of our 1st Assembly,” Majeski said. “Arnie’s endorsement is highly appreciated. He is a man of character and vision. I look forward to closely working with and learning from Arnie.”