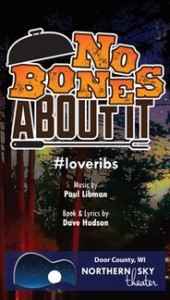 On July 27, Northern Sky Theater will be doing something very different, something theaters normally discourage: encouraging patrons to live tweet during a performance.

No Bones About It is a musical in which social media and “hashtags” are referenced throughout the performance. “Tweeting during this performance will encourage audience engagement, and is an experimental marketing tactic that will connect people of all ages and areas,” noted Northern Sky’s social media marketing intern Christiana Gorchynsky.

A tweet seat involves a small block of seats from which patrons can send tweets to Twitter and follow a designated hashtag about the show while it’s in progress on their mobile devices or tablets. The reserved specific seats (in the back of the theater) will ensure that smartphone users don’t disturb other patrons.

For this tweet seat, a limited number of patrons will be allowed to participate. If you are interested in being part of this novel event, and would like to be selected to live-tweet during this world premiere comedy, email [email protected].