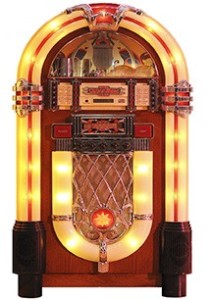 I’ll never forget the night I walked into my favorite bar, ordered a beer, and spent my hard-earned dollars setting the tone for the rest of the night via the jukebox only to have it undone by two intoxicated “Top Nine at Nine” playing patrons.

Prior to that evening, I saw the jukebox as a free-for-all – a chance for people of all musical interests and backgrounds to slide a couple dollars or some loose change into the device and pick out whatever fit their mood. Perhaps, up until that point, the jukebox gods had been smiling down on me and exposing me to people who considered their surroundings, provided a good mix of tunes to play, and who had really good taste in music.

But when I spent $5 to play mellow music for a mellow crowd, only to have it followed up with LMFAO’s “Sexy and I Know It,” and Lady Gaga’s “Poker Face,” I began to see plugging the jukebox with loose change as a craft. A craft that combines a love of music with a love of consideration for others, and one that not everyone is in touch with.

That was the night that the words “jukebox etiquette” popped into my mind. Is there really such a thing? I wondered.

Some people may assert that the individual who puts their money into the machine has free reign over what they want to play and if you don’t like it, too bad. True. However, we are talking etiquette here. I don’t think it is a stretch to say most of us have been subject to other people’s terrible taste in music through jukeboxes and that, yes, there are some people who should never be allowed within 15 feet of them.

I can illustrate this point with the first defining jukebox moment of my life: when the administration of my high school thought they were being nice to the students and purchased a jukebox for the lunch room.

From 11:15 am until 1 pm every school day for the next two months, someone decided it would be a good idea to give Cher the chance to ask us if we believed in life after love, on loop. It echoed through the halls. When the lunchroom supervisor couldn’t take it anymore, it was pulled from the jukebox only to make way for Journey’s “Don’t Stop Believin’,” that took us all the way to summer break.

Was it hilarious? For about three days. But this was closed-campus high school (meaning we couldn’t just walk away from the music) and like most teenagers, we got a kick out of watching the mounting frustrations of our teachers and principals.

But when it happens in real life at a bar you choose to go to, fewer things are more painful than hearing “Free Bird” followed by “Hit Me With Your Best Shot” followed by “Hooked On A Feeling.” There are very real consequences to poor jukebox etiquette – it’s called jukebox warfare. By the time it comes down to it, hardly anyone in the bar is having a good time anymore because you’re all sifting through your wallets and purses trying to stick it to the other guy.

Jukebox etiquette is not complicated. In fact, I’ve found that there are four key components to keep in mind when you belly up to that magnificent sound machine.

The jukebox is no place for the Top 40.

I repeat – the jukebox is no place for the Top 40. If, before you put your dollar in the jukebox and pick the song, I can go out to my car, turn on the radio, and hear it on three different stations at once, it is not worth your money to play it.

The jukebox is a refuge from the endless Taylor Swift-Katy Perry-Bruno Mars-Imagine Dragons radio loop. Treat it as such.

At the bar I frequent most, grunge and classic rock are the go-to genres playing from the jukebox. After all, both complement the chill environment, locals and craft beer selection there. That being said, grunge and classic rock aren’t necessarily the right playlists for every bar all the time. Take your time to figure out the crowd and when in doubt, ask the bartender.

There are few better things in life than hearing the stranger at the next table say to their friend, “Good song!” after you spent your hard-earned dollar picking it out. That doesn’t mean that one Beatles song should make way for another, it just means that the genre is good to stick with, so move onto another song within that genre.

When choosing songs at a crowded bar, an etiquette-minded individual will recognize that there are other patron’s songs in the queue. A live version of “Stairway to Heaven,” followed by a Grateful Dead jam and another Grateful Dead jam may have a value of $1 per hour, but it won’t win you many friends at the bar.