On the Web site of FM 106.9 The Lodge – Door County’s newest radio station – there are a few sentences that sum up owners Mike and Carrie Mesic’s whole approach to what they do:

And, true to their word, this is exactly what FM 106.9 The Lodge brings to the airwaves of Door County – a healthy dose of originality and spunk, served with a side of pure unabashed love for rock music and the musical happenings of the Door Peninsula. The story of The Lodge is one literally years in the making, and one that proves if you want something bad enough, it will indeed happen.

Mike Mesic recalls being interested in radio, and music, from an early age. “I was that kid at family gatherings who always hooked up my walkie talkie to the record player so the music could filter throughout the entire house,” he laughs. He went on years later to study Broadcast Management at Arizona State University. After graduation, he found a full-time radio station job in Sault Ste. Marie, MI. Having family in Michigan, Mike decided to make the transition to the Midwest. It was in Sault Ste. Marie that he met Carrie, who, at the time, worked at the credit union Mesic banked at.

“She didn’t recognize my voice – she actually didn’t listen to me at all,” laughs Mike, and Carrie agrees, saying, “I actually listened to the competing radio station!” Regardless of Carrie’s listening preferences, when Mike got a better job at a radio station in Colorado Springs, CO a little over two months later, Carrie found herself moving out there with him. Then they bounced around a little – a year and a half in Colorado Springs, four in Duluth, MN, Omaha, NE for one, and Milwaukee, WI for nine years. 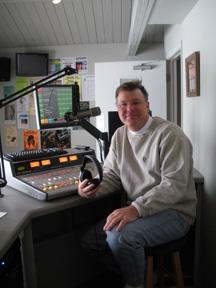 “Radio isn’t always lucrative,” Mike says about his many relocations. “There are always lay-offs or format changes. I’ve been employed often, but I’ve also had successful stints in unemployment as well!” While in Milwaukee, Mike worked for Case Communications, at radio station FM 106.9 The Point. 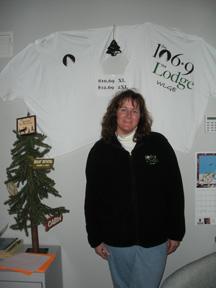 The Mesics came to Door County for a vacation during their first summer in Milwaukee. “We had friends that kept telling us, ‘you have to go up there,’ and so we did,” Carrie says. They were prepared for the beauty of the peninsula – what they weren’t prepared for is how much they would want to live there. “On our last afternoon here, we sat at Shipwrecked in Egg Harbor – it was a beautiful, sunny day – and plotted how we were going to eventually get up here for good,” Carrie says.

It had always been Mike’s dream to have his own radio station, although simply starting a new station isn’t as easy as it sounds. “Unfortunately, you can’t just wake up one day and start a new station,” Mike says. “You first have to petition the FCC (Federal Communications Commission) for the allocation of the channel. And you better hire an engineer do to do the legwork as far as the paperwork, or they won’t even look at it. Then, the channel goes to auction and all the parties interested in the channel get to bid on it. So, even if you petition for a certain channel, there’s a strong possibility that you might not even get it once it goes to auction. It’s often a long road.” To prove that point, Mike goes on to say that once he and Carrie petitioned for 106.9 The Lodge, the paperwork sat there for seven years before the FCC even took a look at it.

The auction for the channel was finally held in March 2007, along with 125 new licenses across the country. The auction dragged on for 28 long days with several bidders vying for the Door County permit. This time, the folks who originally petitioned for the channel won. And, in a whirlwind series of events, the Mesics moved to Door County, started remodeling their current Ephraim office with the help of local handyman extraordinaire Todd Jensen, secured post office box number 106 in Ephraim, and started their first day of broadcasting on April 26, 2008 at 1:06 in the afternoon.

Even before all of these events took place, research for the radio station and what it would offer began in earnest. When asked how they went about figuring out what Door County wanted to hear, the answer was easy. “Jukeboxes,” Carrie says. “We combed Door County for jukeboxes – the Bayside, Mojo Rosa’s, Northern Grill – you name the place, we were there. We already had an idea of what was being listened to here, but we needed to confirm it.”

They also talked to many a Door County resident and got the scoop on how they really felt about radio on the peninsula. “We got the feeling right away that there was a huge presence of local music in the county, but none of that music was being played on local stations,” Mike says.

Once they finished their “jukebox research,” the Mesics looked to see what was playing on other premier resort area radio stations. “The interest in arts and entertainment in Door County is very similar to what is in a place like Martha’s Vineyard or Stowe, VT,” Mike says. “There are upscale locals and upscale visitors, and we based a lot of what we play on that fact.”

Because of the Mesic’s research, the radio station is purely a labor of love for Door County locals and visitors alike. The Lodge’s antenna is strategically placed, so that the signal reaches all the way from Washington Island to Brussels. The Wednesday night “Lodge Local 106.9” show hosted by Jimmie Riley is a huge hit, playing songs about Door County, by Door County artists, or songs written in Door County. Mike also prides the station on having a “More Music Morning Show,” which plays music from 6 am –noon, with “106 Second News Updates” with Dennis Lonstine throughout the mornings. And, for visitors to Door County who aren’t lucky enough to reach The Lodge on their radio dial at home, the station is now streaming online for the whole world to hear.

Not only is The Lodge a labor of love, but it’s a local labor of love. Everything is done in-house in their Ephraim office, from the actual programming of the station to advertising sales and Web site design – and it’s something that the Mesics take pride in.

“We’re always looking for input,” Mike says. “We’re not just playing our favorite songs. We know we can’t please everyone, but we really want to try and be most things to most people. We owe that to ourselves, and to our listeners and advertisers.”

For more information or to listen to 106.9 The Lodge, visit http://www.fm1069thelodge.com or simply listen on your radio.