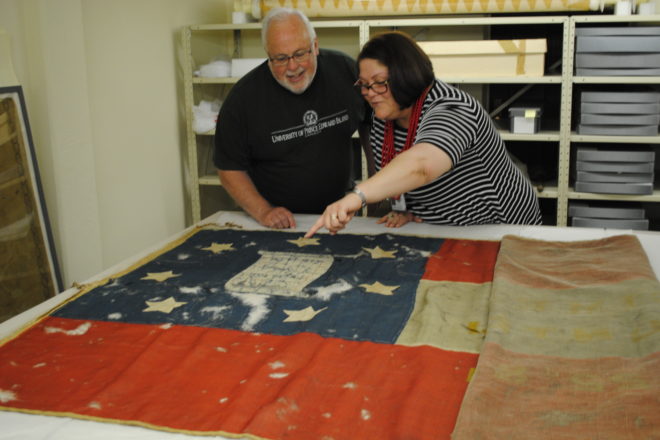 Presenter Larry Desotell and Ms. Ryan Blocker, Curator of the Alabama Department of Archives and History, examine the flag of the 1st Alabama captured at Island No. 10. Photo by GeorgiaAnn Hudson, ADAH.

Following the battle of Island No. 10 across from New Madrid, Missouri in March/April 1862, more than 1,100 Confederate prisoners were sent to Camp Randall in Madison. Of those, 140 died and were buried in a section of Forest Hill Cemetery called Confederate Rest. This presentation will focus on the battle, the decision to use Camp Randall as the site of a prison, and the interaction of the 19th Wisconsin Infantry, which acted as guards for the prisoners. Insight will be given on Confederate prisoners from Alabama, Tennessee, Arkansas, Louisiana and Kentucky. The program will focus on the deadly confrontation between Corporal George Washington Spears of Desotoville, Alabama and Private Clarence Wicks of Dayton, Green Lake County. The program will conclude with a description of a transplanted southern belle who became determined to make sure the burial place of “her boys” would be preserved.

Desotell became interested in “Confederate Rest” after reading a short description of the cemetery, which he did not know existed. He first visited the cemetery on a cold winter day and came away with the perception of melancholy that these men died a slow, lonely death so far from home in a place that may have seemed like an alien world.

Desotell taught history and political science at The Arrowhead High School in Hartland, Wisconsin for 32 years. He continues his passion for history by teaching classes for Learning in Retirement. He retired to Sturgeon Bay and is currently working a book about his topic, “Confederate Rest.”

This program does not have an admission fee, but an offering will be taken to support the Heritage Village at Big Creek. For more information call 920.421.2332 or email [email protected].