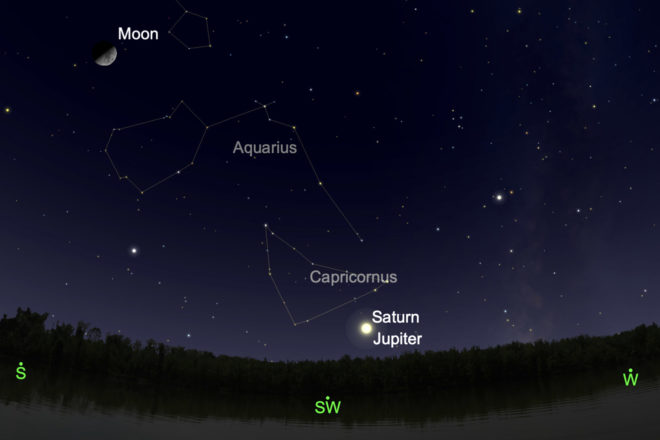 Had there not been a collision, there would be no winter solstice or seasons. And were it not for seasons – and the planets Jupiter and Saturn – life on Earth as we know it would be highly unlikely.

While the solar system was developing, it was chaotic. Scientists speculate that it began as a swirling disk of gases and cosmic dust.  Because of the force of gravity, particles were drawn together, colliding and fusing. Almost all – 98.8 percent – of the mass of the solar system was drawn into the center of the disk, which became the sun.

The remaining mass continued to hurtle through space, colliding and coalescing because of gravitational forces. Numerous violent collisions resulted in the formation of the infant Earth, and similarly – millions of miles farther out in space, where countless collisions with asteroids and comets were taking place – Jupiter and Saturn grew gigantic.

Apparently, one particular collision made a momentous impact on Earth: a Mars-sized object crashed into our planet, resulting in the creation of our moon and causing the Earth’s axis to tilt.

Understand that this explanation is oversimplified and that currently, astronomers are revising their theories about the origin of the moon. However, the consensus is that there was a huge collision; the Earth’s axis shifted; and consequently, we have seasons.

If the Earth’s axis were not tilted, we would have 12-hour days and 12-hour nights throughout the year. But because the Northern Hemisphere is tilted away from the sun during this time of year, the number of daylight hours is reduced; and because the sun appears low in the sky, its warming rays are weakened.

Uneven heating between summer and winter determines climate, helps produce the prevailing winds and causes the seasons, influencing such things as species diversity and precipitation.

The winter solstice, the longest night of the year, occurs Dec. 21. On that day in Door County, the sun will set at 4:12 pm. That evening, about an hour after sunset, if it’s clear, a bright light will appear near the horizon in the southwestern sky. It will not be a star, but rather a conjunction: Saturn and Jupiter will appear to be touching, despite the 400 million miles between the two.

The last time a Great Conjunction was visible as one brilliant star was in 1226.

Small objects such as asteroids and comets can be erratic, and yes, collisions in space still occur, but at least on a human scale, the motions of the planets are relatively stable. The Earth and other planets orbit the sun on essentially the same plane and at predictable speeds: the Earth orbits the sun in one year, Jupiter in 11.86 years and Saturn in 29.46 years.

With such a disparity of orbital periods, the sun, Earth, Jupiter and Saturn come close to being aligned only every 20 years, and a nearly perfect alignment is very rare. It happened in 1623, but apparently, it was impossible to observe with the naked eye because of the glare from the sun.

If conditions are favorable for this year’s Great Conjunction, members of the Door Peninsula Astronomical Society will broadcast live images of the conjunction taken from the Leif Everson Observatory in Sturgeon Bay. Through a scope, or even a good pair of binoculars, these planets and perhaps their moons will be distinct.

And while you gaze at Jupiter and Saturn, be grateful. Remember the erratic rocks hurtling through space? Some comets and asteroids could still collide with the Earth, and such a collision would be catastrophic.

But NASA researchers believe, based on research and computer models, that the massive gas giants Jupiter and Saturn either absorb passing cosmic objects, or because of their “immense gravitational force and angular momentum, hurl roaming debris into interstellar space.” Consequently, Earth is protected.

As you observe Saturn and Jupiter on the winter solstice, consider that if it were not for the cosmic shielding that these two planets provide, life on Earth as we know it probably would not exist.

Coggin Heeringa is program director and naturalist at Crossroads at Big Creek and a member of the Door Peninsula Astronomical Society.