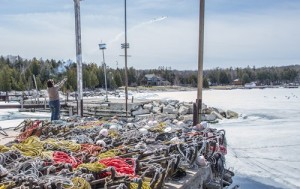 DNR fishery technician Lynn Peters fires a percussion gun to scare away gulls while the 30,000 Chinook salmon were being stocked at Gills Rock on April 23.

The water temperature registered 41 degrees at Gills Rock when the Wisconsin Department of Natural Resources tanker truck pulled in at Weborg’s Dock on April 23 with 30,000 six-month-old fingerling Chinook salmon.

It was a good day for the charter fishing captains of Gills Rock, who spent months doing research and organizing and attending meetings and talking with state officials about the lack of Chinook around Gills Rock and the need to stock the fish in Gills Rock rather than Ellison Bay, where the Chinook stocking had been taking place for most of this century.

On hand for the big day were Don Grasse of King Fisher Charters, Tim Guckenberg of Reel Addiction Charters and Paul Schwengel, who has kept a boat in Gills Rock for 30 years and led the fundraising effort for net pens to hold the fingerlings (which, ultimately, were not used this year for a variety of reasons). 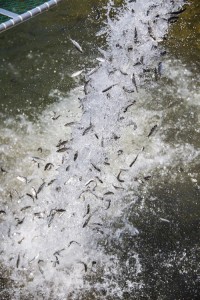 The Chinook fingerlings traveled from the back of a tanker truck through a hose and into the 41 degree Lake Michigan.

Betty Weborg, wife of fourth generation fisherman Jeff Weborg, was also there with her three-year-old grandson Andrew, who, Betty said, may represent the sixth generation of fishing Weborgs.

As Rosnow emptied the fingerlings from the tanker through a hose, Peters fired a loud percussion gun to scare away “the sky rats [gulls] out there just waiting for these fish.”

“Obviously, we have bird problems wherever we go. I don’t know if the birds know our truck,” Rosnow said. “Normal predation is factored into the stocking number, but it’s tough to see all our hard work eaten by birds.”

When the two tanks were emptied, only about 30 of the fingerlings appeared not to have survived the transfer from tank to Lake Michigan.

Asked how they counted 30,000 fingerlings, Rosnow said it’s done by weight displacement. The fish were also tagged in the snout and the adipose fin was removed as part of the DNR’s long-term study of Chinook patterns in the lake. Anglers are asked to turn in the heads of Chinook they have caught without the adipose fin.

The fingerlings were released into a gill net boat launch that was mostly free of ice and which had a spring from the upland swamps running into it.

“This is where the imprinting will take place,” Grasse said of the spring. Imprinting means the fish consider that area their natal home so they return to spawn in the fall.