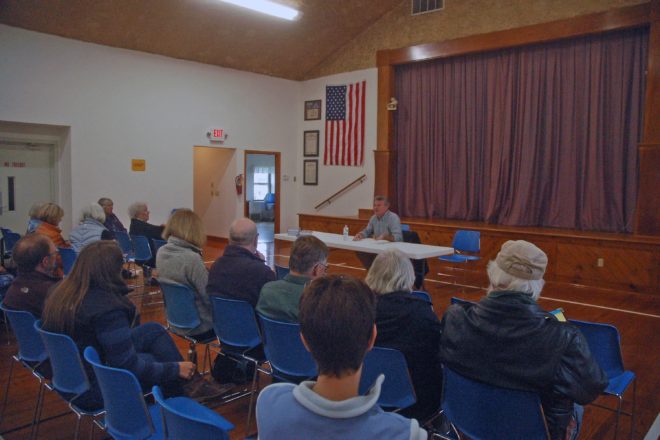 On Monday, Oct. 23, Rep. Joel Kitchens finished up a round of four listening sessions in his district by holding his first-ever session in Sister Bay in what turned out largely to be a discussion of wider social issues beyond his jurisdiction, much like it began the week before at Algoma’s City Hall.

The Oct. 16 Algoma session began with a middle-aged man in the front row asking Kitchens about Assembly Bill 482, a Democratic initiative that would legalize recreational marijuana, allowing a resident who is at least 21 to possess no more than two ounces of marijuana (that goes to a quarter-ounce for non-residents). The bill also creates a process for a person to obtain a permit to produce, process or sell marijuana for recreational use and pay an excise tax for the privilege of doing business in the state.

“To be honest with you, it won’t make it out of committee,” Kitchens said.

Why so much opposition if two-thirds of the state wants it legal, the man asked. For the record, the most recent survey available appears to be a July 2016 Marquette Law School poll with 59 percent of respondents supporting legalization.

Kitchens explained as long as marijuana remains illegal at the federal level, Wisconsin can’t legalize, no matter what other states have done. He said it needs to be resolved by the feds first.

“The political reality is that there’s a lot of opposition to it and it’s not going to happen in Wisconsin any time soon,” Kitchens said, adding that he believed there would never be a vote on it in his lifetime.

The rest of the Algoma listening session was very Algoma- and Kewaunee County-centered, with the frayed nerves of the aggrieved citizens of that county sometimes showing in the tone of the questions and comments directed at Kitchens.

Nancy Utesch, whose husband, Lynn, ran against Kitchens in the 2016 election, told Kitchens that compromised air quality from manure lagoons and spreading on the fields, particularly, she said, on Spruce Road in the Town of Lincoln, is a hugely overlooked issue in the county.

Kitchens said he hasn’t seen any science on air quality and that documentation is needed. Utesch asked if Kitchens would help by asking the DNR and EPA to monitor the air quality?

Ultimately, Kitchens defended the progress that has been made with the proposed karst-targeted NR 151 rules and approval of the Total Daily Maximum Load (TDML) study that he championed, which he said will help in identifying why all the county’s rivers are polluted.

Kitchens’ Sturgeon Bay session on Saturday morning began with a presentation by Dan Powers, who is leading the charge in Door County to get the state legislature to vote in favor of a constitutional amendment to overturn the 2010 Supreme Court ruling on Citizens United that allows corporations, unions and super PACs to plow as much money as they want on political campaigns.

Powers has been attending municipal meetings throughout the county to garner support for the referendum, and so far has 10 municipalities on board. Powers pointed out to Kitchens that the state referendum bill stalled in the Assembly Committee on Constitution and Ethics, where committee chair Rep. Scott Allen said last week that it is “politics at its worst.”

“It’s not going to go anywhere right now,” Kitchens said, but at Powers’ insistence, said he would have a talk with Rep. Allen, who is his next-door neighbor at the Capitol.

“If it comes to the floor, if ever, I’ll vote for it,” Kitchens said, adding, “It’s not something I’m going to spend a whole of political capital on it. I like to spend time getting things done.”

“Tell him Door County is telling you his logic is bullshit,” Powers said.

“I’ll definitely pass that on when I talk to him,” Kitchens said.

Sturgeon Bay resident Jeff Feuerstein asked Kitchens what he is most proud of, which prompted the second-term Assemblyman to recall the first listening session he held in the very same Sturgeon Bay Library room shortly after his 2014 election.

“You couldn’t get in the door, and people were angry,” Kitchens said.

But today he senses a better mood that seems to correlate with an improved economy. At the state level, he said he is happy that we’ll see the largest education increase ever in the budget, and in his district, he’s happy that the previously mentioned TDML study will be conducted and that funding was secured so Bay Shipbuilding could redo its docks.

Going forward, Kitchens said he is happy to co-lead a commission with Sen. Luther Olsen that will revamp the state’s inadequate school funding formula.

After Sturgeon Bay resident Chris Kellems said the citizens of Wisconsin are getting “screwed” by the Foxconn deal, Kitchens disagreed, saying there has been much misinformation on Foxconn. He defended the project, saying no environmental standards are being loosened, wetland mitigation will be greater than required of any other business, and the wetlands being mitigated are ephemerally wet farmland, and that the Taiwanese LCD screen plant has to earn its $3 billion from the state with results – buildings and jobs.

He was also asked what the state can do about the proposed Back 40 Mine just across the bay in Michigan. He said Michigan has agreed to follow Wisconsin’s more stringent rules. He also said he doubts if Sen. Tom Tiffany’s bill to soften sulfide mining rules will be approved, especially since Gov. Walker voted for those stringent rules when he served in the Assembly.

One woman who had visiting relatives asking why Wisconsin roads are so bumpy wondered what is up with transportation funding?

Kitchens said a statewide discussion is needed, to which Chris Kellems, who lived in California for many years before returning to Sturgeon Bay a few years ago, said Californians pay three figures for vehicle registration and Wisconsin residents should, too, in order to pay for road updates. Kitchens agreed.

Kitchens’ final session was held the afternoon of Oct. 23 at the Sister Bay Village Hall (he appeared in the morning on Washington Island, but we couldn’t make that one).

The first question in Sister Bay was about the school funding formula, which allowed Kitchens to bring up the commission he will chair with Sen. Olsen. Here he gave more details about the commission’s composition, saying it will include Green Bay School District Superintendent Michelle Langenfeld and someone from the state school board association.

“We will travel to every corner of the state and within every district within my assembly district for input,” he said.

Several people had questions about Foxconn, and again Kitchens defended the project.

“I believe Foxconn is going to be very good for us,” he said.

A woman asked Kitchens where he and the state are on gun control?

“I don’t have a lot of hope for drastic gun control being implemented,” Kitchens said, adding that people in northern Wisconsin, law abiding as they may be, love their guns.

“Mental illness might be the bigger issue,” Kitchens said in reference to mass murder by gun.

Kitchens, saying he is pro-life, called “ridiculous” a bill by Rep. Andre Jacque of De Pere that would prevent University of Wisconsin-Madison faculty from training resident physicians in abortions.

“I do not foresee that moving forward,” he said, to light applause from the audience.

There was also discussion on Wisconsin’s gerrymandering case in the U.S. Supreme Court (“I’m the only Assembly district in the state that can’t be gerrymandered,” he said); voter ID laws, especially in Door County where the DMV is only open two days (he’ll look into making it easier to get ID in Door County); free speech at UW campuses (“That’s where you open your mind and allow people to speak,” he said); Door County Dreamers (“I would love to see realistic reform.”); and health care (“We really have to look at the cost of health care, not how to shift the costs. We pay three times as much as anybody for health costs. How can we address insurance if we don’t address costs?”).