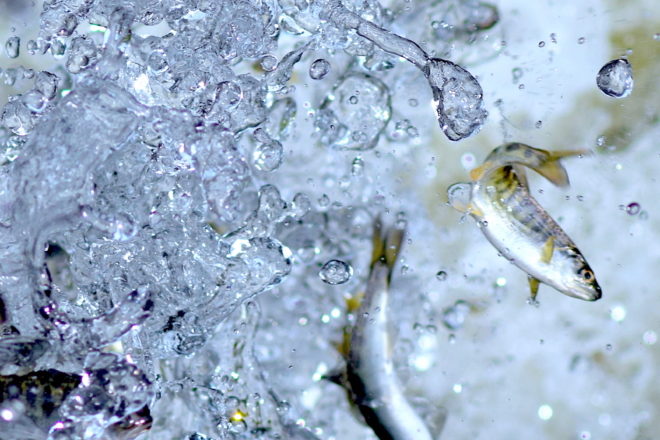 Anglers hungry for more salmon, steelhead and brown trout got an early Christmas present last week when the DNR announced it would significantly increase stocking levels.

The proposed totals will be the most steelhead (rainbow trout) stocked since 2009, the most chinooks (“kings”) since 2010, the most cohos since 2015 and the most browns since 2016.

DNR Fisheries, Wildlife and Parks Director Scott Loomans said the agency worked with stakeholders in an effort to grow its reputation as the preeminent destination for world-class salmon and trout fishing.

The DNR also announced it will begin working on reviving brook trout stocking. Brookies are a colorful native species that are expensive to raise but a nearshore favorite.

The agency said it would also expand salmon and trout net pen projects – such as those used in Gills Rock, Algoma and Kewaunee – to maximize the survivability of stocked fish.

Tom Kleiman of Accurate Marine and Storage of Kewaunee and president of the Wisconsin Lakeshore Business Association, said it was a priority to promote the entire Lake Michigan fishery.

“We’re excited,” Kleiman said. “People want salmon, steelhead and brown trout. Those are the species that attract anglers from all over the country.”

Blaze orange remains an important color this weekend for a four-day, antlerless-only gun deer hunt that runs through Dec. 15.

Camo returns Dec. 16-23, but then there’s nine more days of blaze in much of farm country, including Door and Kewaunee counties, for a holiday antlerless gun-deer hunt Dec. 24-Jan. 1.

So far this fall, more than 260,000 whitetails have been harvested in all seasons, including more than 3,400 in Door County and more than 2,700 in Kewaunee County.

Unless there’s a huge push in the remaining seasons (bow, crossbow, and firearm antlerless-only statewide and farmland holiday hunts), this will be the first sub-300,000 deer harvest since 1993, and only the second in the past 36 years.

Through Dec. 9, Door County hunters had taken 82 deer in the muzzleloader season compared to 70 in Kewaunee County. That hunt ended Dec. 11.

The preliminary nine-day gun deer hunt totals were 2,133 in Door and 1,757 in Kewaunee.

WTU president Jeff Schinkten said the group hit the $50 million mark 10 years ago, 27 years after its founding in 1982.

“It’s humbling to think it took just 10 more years to double that total,” Schinkten said. “We want to thank our members, sponsors and supporters.”

WTU Executive Director Pete Gerl noted that more than 2,000 WTU grants were presented across the country last year in support of conservation, education and the preservation of the American tradition of deer hunting and the shooting sports.

Decades ago, the group started with just a handful of events. This year, nearly 500 events were held, involving more than 114,000 members and supporters.

Using the world’s largest prototype polymer 3D-printer, a team at the University of Maine looked on as the 25-foot boat was created in 72 hours.

Called 3Dirigo, it was made from bio-based feedstock including corn and trees. It was put in a test basin with eight people on board, and it floated.

The printer used can print up to 500 pounds an hour and produce objects 100 feet long by 22 feet wide by 10 feet high.

The group believes it will be able to produce 100-percent recyclable boat molds to builders within a year.