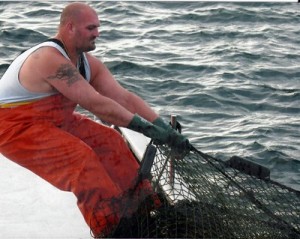 Jim Laughlin came into the fishing industry by way of his high school sweetheart.

“I was dating Mark’s daughter, the next thing I knew I was on the boat,” he said.

He was 16 then, and 25 years later he is married to Heather, that high school sweetheart, and he’s still on the boat.

Laughlin spends many of his days out on the open water of Lake Michigan casting out and hauling in nets of whitefish for J&M Fisheries in Gills Rock, owned by Heather’s dad Mark and uncle Jeff.

“We’re out there six days a week when it’s heavy, but not in November because of spawning, and in winter not as much,” Laughlin says. “Mother Nature controls that.”

His favorite part? Being on the boat in the summer is his job. “Not too many people can be outdoors all the time that time of year and we don’t have it as heavy, so it’s not as physical,” he says.

Fishing is usually heaviest, in terms of haul, in October, though as always it’s an “up and down” business.

“This last season was down with the low water levels and the quagga mussels, but the year before we had a good year,” he says.

Most of the whitefish J & M Fisheries catch is sold to companies in New York, Chicago and Canada, but they also supply local restaurants with whitefish for Door County’s iconic fish boils and Friday night fish frys.

“The hardest part,” says the barrel-chested Laughlin, “is the physical labor – it takes a lot out of you, dealing with water currents and pulling in the nets.”

He’ll keep fishing for “as long as my body will hold up.” If he’s anything like his wife’s family stock, that could be a while. Howard Weborg, a close relative of Jeff and Mark’s, fished into his 90s.